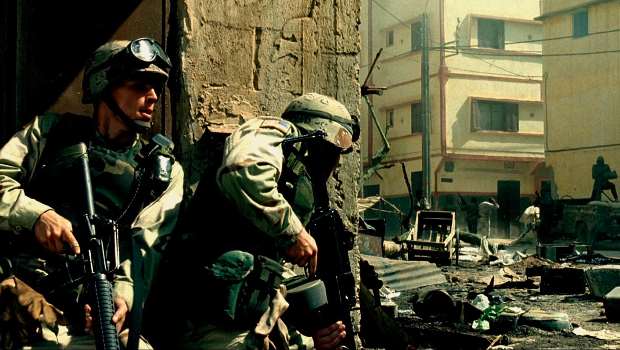 Summary: The immediacy and realism of BHD is the key to its success.

Black Hawk Down can be dissected critically, in two key areas: Viewed as another example of the classic gung-ho “America saves the day” patriotic war movie (though in places it proves far more intelligent than the long list of efforts in this field ranging from say Top Gun to Behind Enemy Lines), BHD serves as little more than post September the 11th morale boosting propaganda.

However if consumed as pure spectacle, BHD is completely unparalleled in the way it depicts the sheer speed and savagery of an urban battle situation, with all the dirt, glass, blood and bullets almost literally thrown into the viewers face. I saw it from about three rows back in the cinema, and emerged after two hours of action that never lets up with a sore face from wincing continually throughout!

Scott proves once again that he is a director at the very pinnacle of his technical powers. His ability to negotiate: a) such a huge undertaking of organisational scale and logistical depth and b) to commit to a genre (the conventional war movie) where it would be easy to fall into the trap of rehashing the classic war movies of the past, and throughout it all keep the camerawork fresh and innovative, the lighting characteristically immaculate is there for all to behold. Scott must surely be heralded as the undisputed heavy weight champion of the action adventure spectacular. Twice in recent years he has succeed in completely revitalising highly conventional genres (the historical epic with Gladiator and the aforementioned war movie here) without hybridising or subverting them, instead applying a wide range of superlative technical skills to create something fresh.

The sprawling urban wasteland of the Somalian capital is depicted as a parched outpost on the edge of oblivion, all sandy yellows and browns, with the unending desert on one side and the high-cliffed coastline of the Red Sea on the other, adjacent to which is the US forces headquarters, where the opening scenes take place.

The opening 45 minutes are by far the least successful, following a conventional course. Friendships and rivalries are introduced between the soldiers of the different companies, and there is a lot of macho posturing and treacle like sentimentality that one has come to expect from the Jerry Bruckheimer stable. (see cheesy bits in “The Rock”, “Armageddon”, “Gone in 60 Seconds” et al) It obviously sets the scene for the firestorm that follows but some of the dialogue is remarkably diluted and pared-down, and scenes that require a degree of warmth and subtlety are heavily handled, despite portraying the illusion of warmth and subtlety.

However no criticism can be handed to the ensuing battle scenes, at least from a purely technical point of view. The relative ease and quiet of the opening exchanges depict Blackhawk helicopters gracefully circling Mogadishu in late afternoon night, but thereafter the physical and emotional demands placed upon the ordinary soldier in close quarters combat are elucidated with breathtaking accomplishment. The multitude of camera shots and angles make for a disjointed and fragmented composition that enhances the sense of fear and paranoia of not knowing where the next shot is coming from. At times a documentary-like quality of camera work augments proceedings, evoking stylistic similarities with newsreel footage, and Italian neo-realism (in purely aesthetic terms, if not ideological). Indeed the whole film is reminiscent of Gilles Pontecorvo’s post-Neo-realist epic The Battle of Algiers.

Scott’s camera juxtaposes deliberately obtrusive, “in your face shots” (close ups of rapidly blinking eyes and startled, sweat soaked faces) with sweeping, mobile shots of demolished city streets and municipal spaces. The bloodletting is frequent and visceral, one scene particularly gruesome as a number of Rangers attempt to save one of their comrades’ life by clamping his femoral artery!

The viewer is transported forward on a relentless, rushing torrent of gore, pain and panic into a situation of supreme empathy with the combatants. Yet there is an order to each individual segment of action, amidst the chaos, belying the fact that every action set piece was painstakingly crafted, down to the finest technical details.

One major criticism of the battle segments is largely ideological. Despite admiring the technical bravura and confusion-fuelled excitement of these scenes, not one Somalian character emerges as in the slightest bit positive. “They” are perceived purely as the enemy, cannonfodder to get in the way of well places bullets and rockets. In the one scene where a Somalian Militiaman speaks of his war not being America’s war, he is portrayed as a menacing captor, an evil figure, despite his words actually having some truth and relevance to past and indeed current events. This largely racially derogatory element of the “enemy” as “other” and a threat is a common thread throughout Hollywood cinema, from the days of the “Indians” in westerns and the Vietnamese till the present day, and remains a question largely unaddressed, by all but a handful of films.

However BHD appeals to the most basic needs of the viewer; to be placed in danger, and to experience, vicariously, all of the excitement, confusion, fear and suffering of the combatants. The immediacy and realism of BHD is the key to its success, largely constructed through superior direction and a good cast (despite having little to play with in terms of script), elements that ensure the viewer a harrowing yet enjoyable cinematic experience.