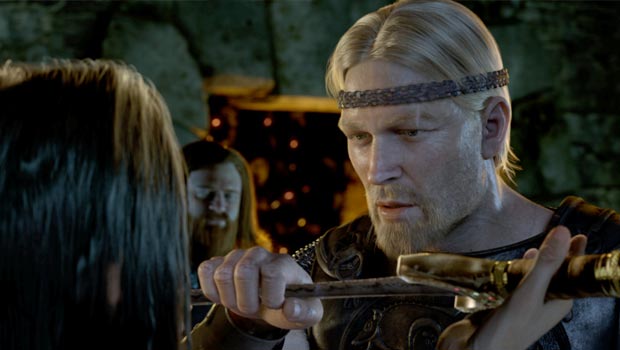 Summary: My quibble, if I have one, is that Beowulf's adventures are a teeny bit repetitive.

One of my fondest memories of university is my first year Anglo-Saxon tutorials. Anglo-Saxon was compulsory, but not actually *taught* and every Sunday night we scrabbled to translate swathes of poetry into modern English with the aide of the glossary. We would then take it in turns to blurt out random sentences to which our tutor, fingers steepled before him, would patiently respond ‘no’. The poor man; we must have driven him mad.

And the point of all this, you ask yourselves (enough rambling, Coco, get on with the review!)? Well, one of the swathes of poetry that we were called upon to mangle was of course Beowulf. And while I can’t pretend that I appreciated it at the time, I now realise just what a debt the literary and film industries owe to the anonymous maker of this, the only surviving work of Anglo-Saxon heroic poetry. As a major source of inspiration for one JRR Tolkien, and in turn pretty much every fantasy novel featuring trolls, dragons, and muscular blond heroes ever since. Even Alien has been alleged to owe a debt to Beowulf. Nor is it the first time it has been depicted on film. But its the first time it – or anything else for that matter – has been depicted in quite this fashion.

For Beowulf has been rendered in all-singing (there’s quite a lot of singing), all-dancing (well, it’s more Viking-style thumping and stamping) 3-D Imax mo-cap. And I know what you’re thinking – ew! Polar Express! creepy dead eyed plasticine Tom Hanks! – but give it a chance. It’ll surprise you.

Hrothgar (Hopkins), King of the Danes, is in trouble. His beautiful new hall, Heorot, which he built so that his men could enjoy themselves, has turned into a charnel house. The singing and carousing have attracted the wrath of the monster, Grendel (Glover). Everyone is terrified of the monster, but help is at hand in the muscular golden form of Beowulf (Winstone), who thankfully isn’t afraid of anything. He is ‘ripper and tearer and slasher and gouger… the teeth of the darkness and the talons of the night’. Deliberately provoking Grendel, Beowulf sets a trap, and after a brutal fight, succeeds in ripping off the monster’s arm. Grendel flees back to his mountain fastness, where he dies.

But, just like Police Chief Martin Brody, just as Hrothgar thinks its safe to go back into the meadhall… Because Grendel has a mother. Who is, frankly, considerably smarter and much much more devious than her son, and who also happens to look like a golden skinned, nipple-less version of Angelina Jolie, complete with high-heeled… um… feet. As some wise man once said, the female of the species is more deadly than the male. And Grendel’s mother wants revenge, and gets it, on several levels.

How to describe Beowulf? It’s really, really hard, because in many ways it’s not like anything I’ve seen before. Watching it at the IMAX, in 3D, is such a huge sensory experience that it frankly messes with your head. From the minute the Paramount stars slide into shot *over your shoulder*, well, you’re off! There were points during the film that I had to sit on my hands because I wanted to push the film away from me, back onto the flat screen where it belongs, and not sitting on my knee as it seemed to be. It’s immersive and strange and sometimes it threatens to overload you.

Thankfully Neil Gaiman and Roger Avary have done a really good job with the story. They have made some changes from the original poem, especially with the question of Grendel’s parentage, but it makes sense. They’ve kept Beowulf’s braggart ways, inserted some sly humour, especially in the naked fight scene (yes, another naked fight scene, but no little Ray here – it’s a 12A cert after all), and given the dramatis personae rounded and believable characters who will appeal to a modern audience. If it lags a bit in the middle, that’s probably a good thing, as it gives the audience time to breathe. My quibble, if I have one, is that Beowulf’s adventures are a teeny bit repetitive – man fights monster – but this is straight from the source. (My other problem – that I can’t help but feel sorry for Grendel – probably won’t spoil the story for many.)

And the motion-capture? Again, once you get used to it, it actually makes perfect sense, and having been a doubter, well, now I’m convinced. Rather than having boring old live action actors in a 300-style CGI world, mo-cap allows the directors and designers to create a seamless universe where the humans are as over the top as the monsters.. Instead of Ray Winstone, you get Ray’s gruff voice and his facial performance in a suitably heroic body; instead of grizzled Anthony Hopkins trying to put on weight to play Hrothgar, or worse, wearing prosthetics, its all done afterwards, and his performance is still up there on the screen. I’m not for a minute suggesting that all films should or could be made this way, but for this genre, it works perfectly.

Oh, and the dragon? It’s fabulous.