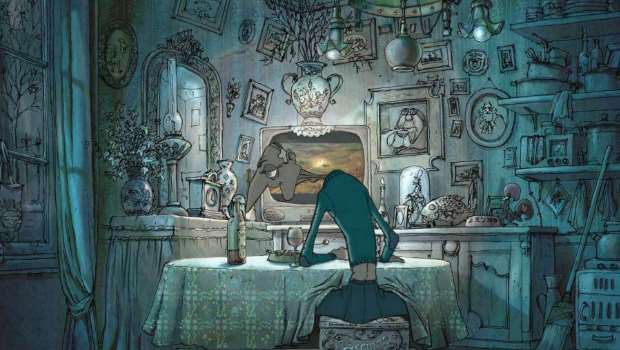 Summary: Belleville Rendezvous is a slice of concentrated Frenchness with a universal appeal.

The complete antithesis of everything Disney stands for, Belleville Rendezvous (known as Les Triplettes de Belleville on its original release in France earlier this year) is French animator Sylvain Chomet’s effortlessly charming cry of defiance against America, wrapped up in a touching and ticklishly funny, yet bitter-sweet tale that dances across the screen.

Belleville Rendezvous begins modestly in scope, foregrounding the quirks and oddities of Madame Souza, her melancholic grandson “Champion” and barrel-like Bruno, their overweight family dog. After the death of his parents a disconsolate Champion is introduced to the French national pastime of cycling by his grandmother, who buys him a tricycle for his birthday. Immediately gleeful, Champion’s love of cycling begins to mask the void in his life. He begins to idolise the greats in the sport and dreams of taking part in the Tour De France. Years later, and a gruelling training schedule has taken its toll on Champion, physically transformed from a cute, doughy child into a sinuous thoroughbred (complete with thunder-thighs and horse-whinnying sound-effects) able to take on the best. He prepares for the test of his life by rocketing through the cobbled streets of some generic slice of Franco-suburban life, towing his Grandmother, who is now also his manager, coach and mechanic, along for the ride.

A microcosm of French culture, expressed in small, colloquial touches pervade Madame Souza and Champions’ familiar and homely environment, lying unchanged over the years as the city build up almost on top of it. Pastoral tranquillity is replaced with urbanisation and the constant din of rail traffic from the viaduct built next to their ramshackle house. The mood here is lamenting yet stoic and defiant, Chomet shows these people unwilling to submit to change on their own doorstep and on their own terms. It is only when change is forced upon them do we see them rise up to react.

The all too dramatic change comes with Champions’ long-awaited opportunity to compete, which is swiftly marred when he and three fellow competitors are kidnapped midway through an asphyxiating mountain ascent by a pair of shadowy figures in a rickety Citroen van. Champions’ family quickly smell a rat, and thanks to Bruno’s keen nasal detection skills follow in hot pursuit of his captors across the sea to Belleville, a sprawling metropolis, where they discover that powerful forces, strangely close to home, are at work behind Champion’s incarceration. A disabled French grandmother and her dog that drags its belly along the ground must represent the two most unassuming animated protagonists since Wallace and Gromit.

Once the initial complication has taken full hold, the depth of Belleville Rendezvous opens like a crevasse and the mood darkens considerably. Environmental and cultural contrasts, emphasised in the classic fish out of water situation our two heroes find themselves in, are brought to the fore. Jacques Tati’s influence is stamped clearly on this film. Alienation is conveyed in the relationship between the characters and the oppressive urban setting they struggle to get to grips with. Construed as the epitome of strangeness in comparison to Mme Souza and Bruno’s cosy homestead, every crowded street corner or deserted dark alley in Belleville contains a bemusing menace to them both. Their vulnerability continually endears them to the audience.

Despite feeling threatened and alone, Mme Souza and Bruno encounter three aging nightclub singers, The Belleville Triplets. Once renowned, now living on the bread line, the triplets provide the Gallic solidarity needed to launch a rescue attempt, culminating in one of the most entertaining car chases in recent memory. Belleville Rendezvous looks out for the little people left on the fringes of society and allows them to prevail in the face of malign opposition. Old world superiority and regional spirit emerge victorious against the monumental force of Belleville, its corpulent inhabitants and the sleazy French mafia who rule the criminal roost there.

Relying almost entirely on traditional animation techniques, Belleville Rendezvous resists the temptation to implement CGI effects. Limited to only one key sequence, that familiar sense of milking all the new toys just because you can is refreshingly absent. Indeed the film falls back on the basics of animated storytelling. The image is once again king, and used to convey the narrative almost completely. Dialogue is left aside as a tool to impart meaning; the film prefers to use clever sound design and dynamically drawn characterisation, explored through expression, physicality and movement along with the occasional musical rendition, as the major device to drive the plot.

The real joy of watching Belleville Rendezvous is derived from the details. Sylvain Chomet delivers a unique vision with a satirical edge that whilst always present, doesn’t detract too heavily from a delightful, ever popular, story of the underdog coming out on top. A clever range of unusual visual touches are interspersed throughout every scene. Any and every shorthand reference to French culture is utilised at some point. Each character bubbles with traits, ticks and idiosyncrasies. Each setting impresses with an array of subtle visual references contained within. Eventually a texture emerges that allows for enjoyment on a variety of levels that leaves you wondering whether this is a kid’s film or an adult animation. Plenty of gags accessible to younger members of the audience sit side by side with more mature pre-occupations surrounding loss, disenfranchisement and cultural imperialism; an impressive sweep of themes across the span of a mere 78 minutes. I only hope the comparatively ambiguous nature of the films’ content, so cleverly interwoven and profound doesn’t put potential viewers off. Acutely observed, satisfyingly embellished and frequently poignant Belleville Rendezvous is a slice of concentrated Frenchness with a universal appeal.