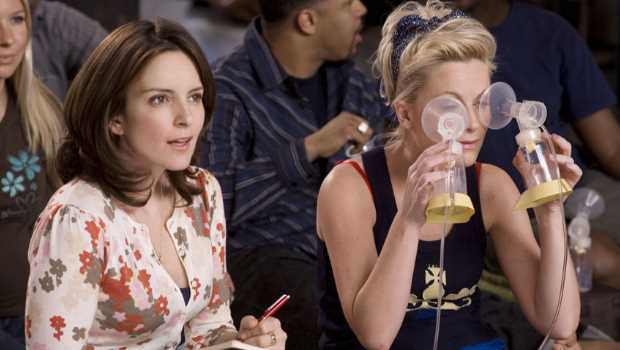 Summary: for the most part the film’s chief aim is to make an audience laugh, and in that respect it delivers (sorry) perfectly.

Baby Mama is a film in danger of going completely unnoticed in UK cinemas this summer. Its two stars, Tina Fey and Amy Poehler, are big names in American TV comedy, but in the UK their names would still produce a resounding ‘huh?’ from most of the cinemagoing public. Added to this, the movie opens the same week as The Dark Knight, unquestionably the biggest blockbuster of the year, and the ‘counter-programming’ slot is already filled by book adaptation Angus, Thongs and Perfect Snogging, which has the luxury of a guaranteed readership audience. It’s all adding up to look like a swift exit from the multiplexes for Baby Mama.

Which would be a shame as, judged purely on a laughs-per-minute scale, it’s one of the best comedies of the year so far. Fey (best-known from Lindsay Lohan comedy Mean Girls) plays Kate, a successful single businesswoman in her late thirties who’s desperate for a baby. Unfortunately everything in her life says that’s not going to happen; work keeps her busy, she can’t maintain a stable relationship with a guy and her doctor “doesn’t like the shape of her uterus”. It seems that finding a surrogate to carry her fertilized eggs may be her last option; enter Angie (Poehler), a loudmouth white-trashy sponger, keen to escape the clutches of her slacker husband (Dax Shepherd), and the stage is set for Odd Couple-esque hilarity, with added hormones.

Fey and Poehler are very funny together, and the scenario gives them plenty of opportunities to show it, mostly as Kate’s pre-baby health regime provokes incredulous reactions from Angie (choice line: “I’m not trying to be dramatic but I would rather be shot in the face than eat this food”). But it’s as much the supporting cast that make this such an enjoyable film; Sigourney Weaver has a handful of hilarious scenes as the ridiculously amoral head of Kate’s surrogacy agency, Chaffee Bicknell (note to comedy writers: a really silly name goes a long way), but it’s Steve Martin, back from the brink and funnier than ever as Kate’s New Age guru boss, who steals the show. Sporting a gross ponytail and spouting hilarious self-help catchphrases, it’s the kind of role the veteran comedian was born to play, and it’s a delight to see him embracing such silliness again.

Where Baby Mama falls short is in attempting to unite these great elements in a completely satisfying whole. Writer/director Michael McCullers (who previously aided Mike Myers’ pen on the Austin Powers sequels) can turn a witty phrase, but can’t currently match that with strong storytelling ability. The film’s plot is rather too dependent on unconvincing character decisions and coincidences, leaving the audience no real emotional stakes to connect to, meaning that the conclusion is the film’s weakest element. Ultimately, it is everything but the ostensible goal, the birth of the baby, that makes this story interesting, and surely that’s not quite how it should be? Thankfully, although this weakness comes to the fore in Baby Mama’s last 20 minutes, for the most part the film’s chief aim is to make an audience laugh, and in that respect it delivers (sorry) perfectly.