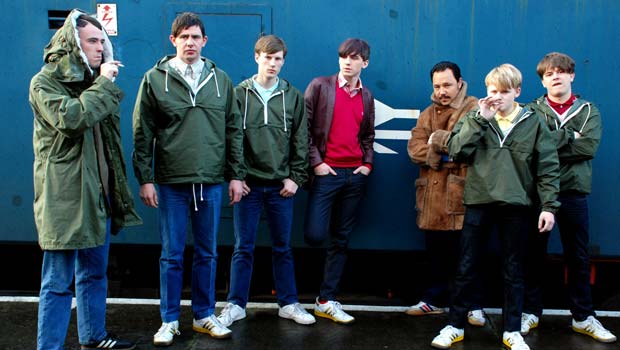 Summary: The film’s biggest strength is its 1980s soundtrack consisting of Joy Division, Echo & The Bunnymen, The Cure and Ultravox among others, but this isn’t enough to save it. One to avoid.

It is a puzzle, the obsession that filmmakers have with football hooligans. They seem to believe that they are intrinsically interesting; more, that they are cinematic. In the last few years we’ve had The Football Factory, Green Street Hooligans (which treated hooliganism as some sort of empowerment programme), Cass (which more interestingly explored the idea of the modern family), and now Awaydays.

The story of Carty (Bell), an unattractive young man with some artistic talent and no outlet for his skills. Since his mother died a year earlier, he’s drifted aimlessly, doing a pointless office job and looking longingly at the Pack, the local firm, a gang of casuals that he yearns to be working class enough to join. Then he meets Elvis (Boyle) at an Echo & The Bunnymen gig, and its love at first sight (at least for Elvis, given to gazing at Carty from under his fringe, like Princess Diana). Elvis is everything that Carty longs to be: a working class gang member who wants to go to art school, likes indie music, dreams of running away to Berlin, and beats up people on weekends. Mostly Saturdays.

If you were a teenager in the 1980s, you will remember – and probably have laughed at casuals, with their wedge haircuts and ugly clothes. And a scene here of the firm, dressed identically in their Fred Perry shirts, Lois jeans, and Adidas trainers, walking in slow-motion to the camera like a scene from Reservoir Dogs, fetishsizes the look to an almost ludicrous extent. Of course we are meant to see them through Carty’s fascinated eyes, but unfortunately they mostly look ridiculous, and we find ourselves agreeing with Elvis when he says Carty should have nothing to do with them.

But Awaydays is wish fulfillment of the highest order. Carty, for instance, is meant to be good-looking, funny and clever, with a way with the ladies. but sadly Nicky Bell’s performance fails to convey this. His inability to see that Elvis fancies him further undermines the character’s credibility, especially when another character outs him in five minutes. And then there’s the violence; mindless and dreary, with a gang that consists of inarticulate and boring thugs. Why would this be attractive to a middle class boy with prospects; is he just bored and slumming, like a Sloane shagging the stable hand?

Director Pat Holden seems to have been going for gritty realism but the cinematography is uninspired and the gloomy colour palette does nothing to lift the picture. The film’s biggest strength is its 1980s soundtrack consisting of Joy Division, Echo & The Bunnymen, The Cure and Ultravox among others, but this isn’t enough to save it. One to avoid.