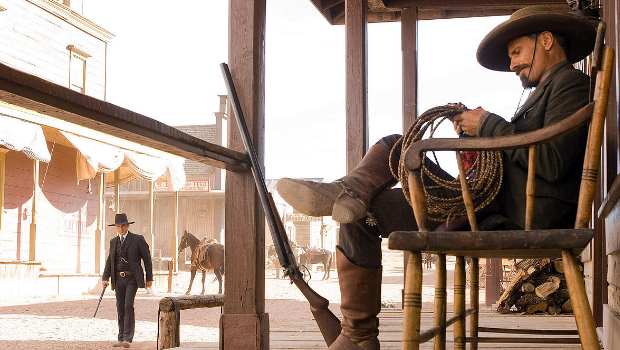 Summary: Frustrations, raw truths and cathartic realisations of ‘what needs to happen’ all combine for a great ending.

Appaloosa, a breed of horse popular in the States, and oft-favoured in classic westerns… This movie also strives somewhat, not to stray too far off the beaten track in terms of the genre.

The film begins with rogue rancher Bragg (Irons) taking action to keep his lawless ‘boys’ out of the local sheriff’s grasp. In a scene reminiscent of bratpack nineties flick Young Guns, Bragg takes the law into his own hands and sets the tone for this moody drama. Enter Virgil Cole (Harris) and Everett Hitch (Mortensen) who ride into town introducing themselves as ‘peacemakers’. They’re essentially hired guns or heavies, whose services are procured by a bumbling Spall and fellow council-folk in an effort to defend their town.

After a couple of hostile encounters, we get a glimpse of the integrity and force with which our law enforcers work. The first act isn’t quite over when a zesty, slightly wanton Zellweger enters the fray. A lady about town, who isn’t quite what she seems, throws the proverbial spanner in the works with interesting consequences for the town, for friends, and for loyalty.

Appaloosa has a fairly straight narrative, which still manages to proffer much food for thought. Harris’ second directorial outing after the acclaimed Pollock sees him playing the main protagonist again, and to great effect. That gravelly voice and steely blue-eyed gait serve him well, whilst Mortensen’s silences simply re-inforce his utter coolness.

Mortensen is per se like fire on screen, which just makes you ask why he’s gone for a supporting role in such an endeavour. He was phenomenal in Cronenberg’s A History of Violence and more recently Eastern Promises, whilst Hidalgo and Spanish epic Alatriste, well – let’s just say his fascination with horses continues… Zellweger is apt in her role which has shades of grey, and plays a complex character well.

Now I love the powerhouse of talent that is Jeremy Irons, and he really is keeping the grand ole’ tradition of great British bad guys alive, but here I couldn’t quite place his accent as American or British. Hopefully he can place it, likely somewhere along the Pacific.

This is a great character study, which is aesthetic, layered, and appropriately paced. It can seem slow in parts, but it simply adds to the flavour and gives depth to the characters. The banter and paced flow between Harris and Mortensen are what drive the film. It breathes: understanding, shared experiences and respect – and that is what prompts the film to it’s ultimate conclusions. Frustrations, raw truths and cathartic realisations of ‘what needs to happen’ all combine for a great ending.

Viggo rocks! A moniker for quality cinema, he fails to disappoint, yet again…