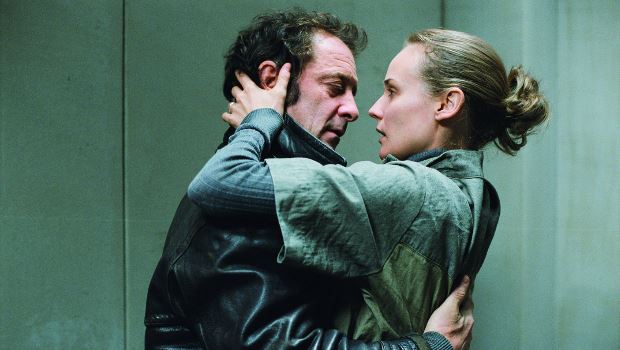 Anything For Her (Pour Elle) Review

Summary: You'd be wasting your time trying to analyse this nonsense.

Anything For Her (Pour Elle) is the story of Lisa (Kruger), happily married to Julien (Lindon), a bloodhound-faced English professor. We know they are happily married as they can’t keep their hands off each other; nonetheless they have a young son and busy lives. Lisa in particular has a tricky relationship with her boss, so when the woman is found battered to death in a carpark, the police don’t waste any time. They burst violently in on the couple at breakfast and drag them off in handcuffs, leaving little Oscar alone and screaming in his highchair.

Three years later and the latest appeal has failed to prove Lisa’s innocence; there just isn’t enough evidence to overturn the conviction. Lisa, despairing, becomes more and more heartsick and depressed, and Julien determines to break her out of prison. Handily he manages to find a real life Prison Break expert, who gives him all sorts of helpful advice, and hatches an elaborate plan to escape. The purchasing of false identities takes him out of his nice middle-class world and provides some of the film’s more compelling scenes, but for the most part this is an extremely stupid film.

For starters, I don’t believe that the police would smash down the door to someone’s flat when they’re in the middle of breakfast and roughly arrest them when they are only wanted for questioning. Especially when they are a nice middle class woman with no prior record. Then there’s the so-called evidence, which seems circumstantial to say the least. Where is Hercule Poirot when you need him? Why would anyone batter their boss to death? Wouldn’t you just leave?

Bah. You’d be wasting your time trying to analyse this nonsense; more to the point, the film wastes its central drama – the whodunnit – by revealing the truth very early on. After that there’s not much reason to stick with it, because a) you can pretty much guess how it will end and b) its completely implausible and silly. Tell No One was an excellent French thriller, so it can be done, but not here. Rent that instead.