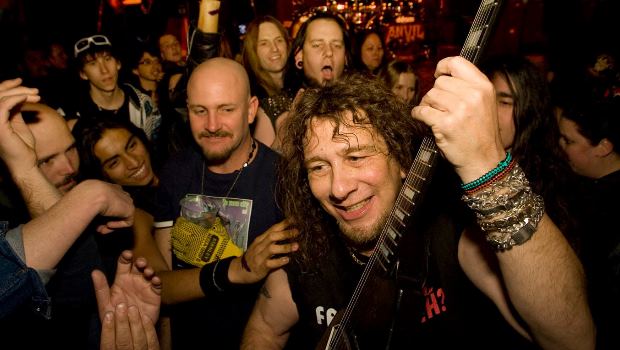 Anvil! The Story of Anvil Review

Summary: Anvil presents a refreshing, touching and real look at the music industry and the trials and tribulations of keeping the faith.

Everyone is comparing Anvil to Spinal Tap but, as (hangs head in shame) I haven’t seen it, I can only review Anvil on its own merits. And these, believe me, are many!

In 1984, Canadian rockers Anvil are sitting on top of the world; playing to thousands at rock venues in Japan as part of a line up that includes Bon Jovi, the Scorpions and Whitesnake, they are ready for world domination. It is what best friends Steve ‘Lips’ Kudlow, the lead singer and guitarist, and Robb Reiner, drummer, have dreamed of and planned for since they met as 14 year olds. The future is theirs….

Twelve albums later, Anvil are still rocking. Lips has just turned fifty, and at his party the band played to twenty fans in a bar in Toronto. His days consist of delivering meals to schools, while Robb works in construction, but they refuse to let go of their dream. So Lips is delighted when a woman called Tiziana mails him to say that she is booking them on a European tour, and off they go to Sweden. Things begin well; they play to decent crowds and meet some of their own heroes. But soon the cracks appear; Tiziana fails to book train and plane tickets, they end up sleeping in airports and carrying their own equipment, playing to empty bars and not getting paid. Things come to a sorry end the last night of the tour when they play a 10,000 seater venue – the organisers have only managed to sell 184 tickets.

Beaten but not broken, the band head home, where Lips decides to give it one last shot. He sends a demo to Chris ‘CT’ Tsangarides, legendary rock producer and old friend, and next thing you know, Anvil are back on a plane to England, where CT gives them the good news – he wants to work with them on the new album. The catch? They’ll need to pay for it…

Anvil is a superbly crafted documentary of such rare sweetness that only the hardest of hearts will be able to resist. Lips and Robb are an hilarious double act; Lips the eternal optimist (‘things can’t get any worse. But if they did…’) and cod-philosopher and Robb with his dead pan humour; their huge spat at CT’s recording studio had the audience in stitches. The contrast between the men’s actual characters and their heavy metal personalities is brilliant: when Lips tries to raise money by getting a job in telesales, he fails to make a penny because he is too polite. (This is the man who went on stage in a bondage harness and played the guitar with a big pink dildo.)

Whether you like metal all not, it’s impossible not to relate to Lips’ and Robb’s heartbreaking determination to give it one last shot. And then another. And just one more. In this world of instant celebrity and X-Factor manufactured stars, Anvil presents a refreshing, touching and real look at the music industry and the trials and tribulations of keeping the faith.