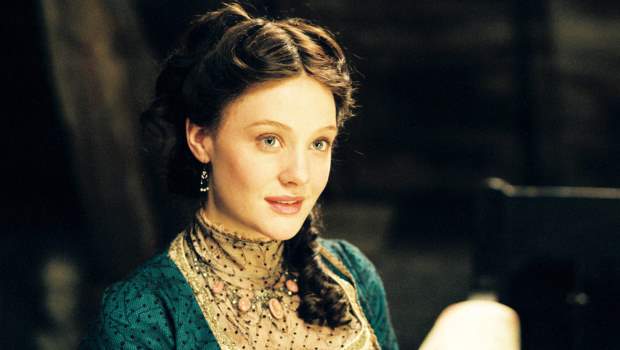 Summary: Angel is a true original, charming and grotesque at the same time, with this steel carapace that is almost sociopathic and then these moments of great charm and warmth.

Angel is the utterly bonkers and rather fabulous (it’s that sort of film) new film from director François Ozon, starring Romola Garai as the eponymous heroine, a stunningly precocious brat who we first see fantasising in school about her life at Paradise House, a local stately home. As the teacher harshly but accurately points out, Angel is the daughter of the local grocer, and lives above the shop. It soon becomes clear that Angel lives entirely in the world of her own imagination, dreaming her life as a writer. Every line she speaks is like something from a play; she is both creative and incredibly self-assured, dominating her poor mother (Jacqueline Tong) who is completely bewildered by the force of nature she has created.

Angel sends her manuscript off to publishers and in remarkably short order is travelling to London to meet one of them, Theo (Neill), who wants to publish her book but gently suggests that she make a couple of changes. Angel refuses and storms out; Theo gives in and soon she is a published author, the toast of Edwardian London, owner of Paradise House, patron of the arts, churning out romantic fiction and attracting adoring fans. One of these, Nora (Russell), comes to work for Angel as a secretary and Angel meets her brother, Esme (Fassbinder), an unfashionable artist and incorrigible ladies’ man. Angel is, naturally, entranced, and commissions him to paint her portrait. She falls in love with him and asks him to marry her; he is slightly reluctant but, like most people, struggles to resist her.

After a whirlwind honeymoon they return home to Britain at war. Esme immeditely enlists. Angel is outraged, and turns against the war; her writing takes on a singularly unpopular pacificist tone and Theo is concerned. Nora discovers that Esme has been home on leave, but hasn’t come to Paradise House; he is having an affair and has fathered a child on his mistress. Nora and Theo agree to keep this a secret. And then Esme is wounded and returns home, a very different man to the one that left…

It’s likely that audiences may be initially perplexed and possibly horrified at the opening scenes of Angel; Garai all stage-school brat, enormous eyes and over-dramatic enunciation. But give it time; Garai and Ozon know exactly what they are doing, and just as Todd Haynes and Julianne Moore did in Far From Heaven, they are setting the scene for a Sirkian melodrama in high style. There is little attempt at realism; particularly funny are the driving scenes, with cars and coaches and even donkeys bouncing along in front of obviously painted matt scenery, in true 1940s style. The Edwardian period, with its luxury and lace and ostrich feathers – everything too big (hats) or too small (waists) is particularly well suited to this lush ostentation, right down to the baronial grandeur of Paradise House, all tartan splendour lie a mini-Balmoral.

The love affair between Esme and Angel is doomed from the minute they meet but, oh, what a love affair. He is the dashing aristo, picturesquely bohemian in his garret studio, painting his muddy pictures of tenements; she is the complete opposite, peddling her escapist romances – both are equally self-interested and self-assured and, basically, selfish. The only selfless person is Nora, madly in love with Angel but never saying a word about it; even trying to replace Angel’s dog with an identical one without her knowing. Angel is a true original, charming and grotesque at the same time, with this steel carapace that is almost sociopathic and then these moments of great charm and warmth. Garai is simply terrific at pulling this off; allowing the odd chink to show through her armour, not to make her a complete monster.

It also says something about the plight of women at that time; Angel, as a lower middle class girl with an aunt in service, would have had very few options. Like many other women of that time, writing was independence, and for her to own property that she earns herself, that isn’t inherited, was most unusual. The cast are all marvellous, but Garai earns special praise, and I hope will not be forgotten come awards season.