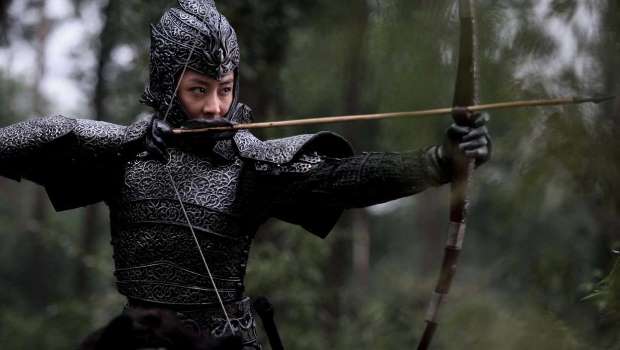 An Empress and the Warriors Review

Summary: By the end you’ll have been through the motions of an action epic but come away disappointed.

When a women takes charge of an army of men, it’s asking for trouble as the ranks of testosterone-fuelled fighters suddenly have to answer to a member of the opposite sex. That’s exactly what happens in An Empress & The Warriors (Kong saan mei yan) as a young princess and only heir to the throne of a Chinese kingdom must take her place as ruler. Not only is she vastly inexperienced, she must also face personal conflicts with the men she relies on most. Sumptuously shot with lavish costumes and sets, this offering from veteran Hong Kong director Tony Siu-Tung Ching (director of A Chinese Ghost Story and the Swordsman trilogy and action choreographer for Curse Of The Golden Flower, Hero and House Of Flying Daggers) has the looks but lacks depth as there is little here not seen in a glut of recent Asian epics.

Set during China’s Warring States period, the Empress of the title is Yan Feier (Chen), challenged by taking her rightful seat on her father’s throne – a poison chalice as she faces the tough job of defending her people from a conflict with neighbouring Zhao warriors. Exposed and lacking in battlefield knowledge, she turns to her childhood friend and her father’s most trusted general, Muyong (Donnie Yen) for help, not knowing he secretly loves her. To make matters more complicated, Feier’s envious cousin Wu Ba (Xiaodong) is furious when he is overlooked for the throne and plots to kill her despite the threat of a civil war if his treasonous plans succeed.

Costume, sets and the battlefield scenes are the most important elements of an epic – factors An Empress & The Warriors scores highly with. Siu-Tung Ching fills the screen with foot soldiers, archers, chariots and horse-bound fighters clashing on vast plateaus while smaller skirmishes occur in forests and another on floating logs. Disappointingly, no sequence stands out from similar fare on show in similarly-themed films such as The Warlords, The Myth, House of Flying Daggers or Curse of the Golden Flower despite the director’s best efforts. The heavy and restrictive body armour means there is little scope for acrobatics even when Yen is given the chance to take on an army single-handedly, while the large-scale battles suffer jerky editing which gives it an unpolished feel.

Away from the fighting the themes of youth given responsibility ahead of their time, unrequited love and treachery from within are played out, with Chen looking suitably stern as an Empress trying so hard to take control of a male-dominated world. Muyong’s love for Feier turns from a sweet subtext to more tragic consequences, started when Feier is poisoned and nursed back to health by forest-dweller hermit, Duan Lanquan (Leon Lai). The introduction of this romantic element makes for cringeworthy viewing due to a score akin to Titanic: if you cover your eyes, the echoes of “My Heart Will Go On” will lead to you picturing Winslett and DiCaprio in place of the Asian stars. When Feier does return to her people for the final fight, there are attempts to pump more feeling onto the characters than previously given time for as the film moves at such a pace it is hard to feel anything for the central trio even when caught in a love triangle. By the end you’ll have been through the motions of an action epic but come away disappointed as this fails to come within touching distance of Zhang Yimou’s enthralling efforts which demand to be watched again.