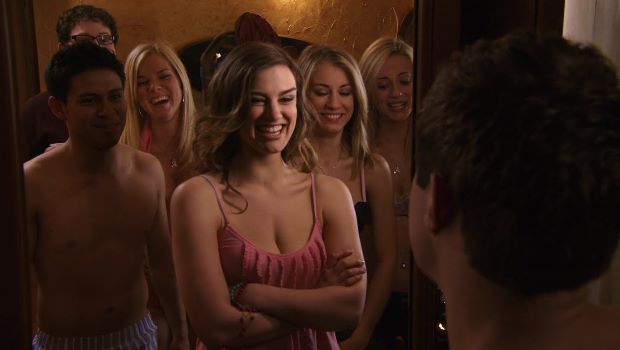 Ten years on from when American Pie made high school gross-out comedies acceptable again, the same franchise is doing its best to push the genre back down to the depths that had once ensured it was given a wide berth by the majority of film fans. This, the fourth spin-off from the initial trilogy which has brought us a trip to band camp among other high jinks, goes back to school to focus on another group of virgins desperate seeking to get laid for the first time. The theme is familiar and so are the jokes – only they are too forced here, most scenes boil down to girls getting naked and the central characters lack any charm for you to want to care if the succeed in getting a girl.

For the first time the American Pie Presents series returns to a high school setting, providing a trio of guys trying to work out how they can look as cool as womaniser Stifler – not Steve Stifler, but a fresh incarnation called Scott played by John Patrick Jordan trying hard but failing to emulate Seann William Scott’s performance in the film trilogy. The hapless lovers are Rob (Hall) who gets captured on tape in lewd-situations-gone-wrong with alarming regularity by his younger brother, Nathan (Horton) who can’t get over his girlfriend’s vow of chastity having slept with six guys previously and the chubby Lube (Hardesty) who suffers from failing to get the attention from the opposite sex he wants – girls in his bedroom. When they stumble upon a book written by students throughout the years in the library offering them tips for pulling chicks and impressing between the sheets, they see it as their social saviour and set out to use this love Bible to help them succeed where they have failed so spectacularly.

Given this is the seventh entry in the American Pie series, it’s of little surprise to find it retreads a lot of old ground in slightly amended ways. In the first scene Rob uses a peanut butter sandwich for the same purpose as Jason Biggs used a pie in the first film, though the need to have his pet dog then devour the snack while on his nether regions to his shock/delight while being filmed by his brother gives you an idea of the depths being mined for a few cheap laughs. Rob’s the constant but of situations made cringingly public over the Internet though the joy taken at his misfortune are far too puerile to be endearing. In one scene he winds up in a lingerie shop changing room with a girl who uses her charms to try to make him steal a set of lacy underwear with the predictable consequences, though the actual situation leading up to the pay-off is so unreal it’s a cheap shot. Rob seems pathetic, rather than naïve, and you’re unlikely to feel sorry for him. Together with his buddies Nathan, whose obsession to get his girlfriend to break her vow of chastity marks him out as a loser who can’t understand women, and Lube, who rarely makes a sensible comment you might expect of a teenager trying to act cool, they’re a tiresome trio to watch fail. Only the high breast and cleavage count will sustain interest among the boys, while any girls watching will be instantly turned-off: at least American Pie tried to give its female characters a more to do than take their tops off.

Even the throwbacks to the original are wasted. The Stifler-character (Patrick Jordan) provided is a pure heartless jock with no charisma while Eugene Levy’s brief cameo in a montage seems tacked on to salvage what remains of his appeal to fans of the original trilogy. High school films about guys trying to lose their virginity are rarely the classiest of offerings, but this is merely a crass and needless attempt to keep the American Pie franchise going.