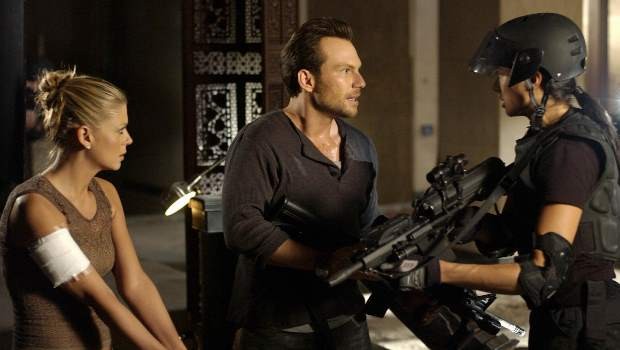 Alone in the Dark Review

Summary: The acting is bad, the special effects are poor, and there is no tension or excitement to be had in any of the action set pieces.

It’s both comic and cruel that in the absolutist world of Internet geekdom, German director Uwe Boll is known to his detractors as the ‘UweBolla Virus’ or, more bluntly, ‘Toilet Boll’, for his unerring ability to turn a perfectly good computer game franchise into box office poison. In this meandering and plain boring special effects bonanza, Christian Slater, delivering an incredibly lacklustre performance, with none of his usual charm, plays paranormal investigator Edward Carnby. Seeking to recover memories lost when he was a ten-year-old orphan, Carnby travels the world hunting down artefacts belonging to the lost Native American tribe known as the Abkani. Carnby’s not long off the plane from his latest adventure when he’s attacked by a crazed assassin possessed of seemingly superhuman powers, a sequence that allows Boll to spend a good deal of his budget destroying cars and buildings and showing us exactly what a bullet looks like travelling from the barrel of a gun into somebody’s chest. Hooking up with his ex-girlfriend, museum curator Aline Cedrac (Tara Reid, who conveys her character’s intellectual rigour by tying her hair back and wearing glasses), Carnby is sucked into a deadly conspiracy involving his old paranormal investigation outfit, Bureau 713, and a plot to open a gateway between the worlds. The fact that a previous attempt to open this gateway by the Abkani tribe led to their total destruction doesn’t put off former Bureau 713 head, Professor Hudgens (Matthew Walker), who, being English, is naturally the villain of the piece. Stephen Dorff appears as Burke, Carnby’s nemesis and the new tactical head of the Bureau, a position that allows for much macho posturing as the two actors try to forget how charismatic they can be if given a decent role, and think instead about their paycheques. Before long, Carnby and Burke have forgotten their differences as they fight off hordes of unconvincing CGI demon beast creatures, and follow the trail of clues to a vast underground chamber that – of course – exists under the old orphanage where Carnby grew up.

Computer game adaptations rarely work well as action movies, partly because the slender storylines are only ever a vehicle for the agency of the player. ‘Alone in the Dark’ does have a fairly good premise, one that on first glance could translate well to the big screen as a slow-burning occult thriller, but Boll is having none of this and buries any possibility of creepy, genuine horror beneath massive explosions, gunfire, strobe lighting, and an obligatory pounding rock soundtrack. The acting is bad, the special effects are poor, and there is no tension or excitement to be had in any of the action set pieces, most of which are so badly edited as to be nearly incomprehensible. Only a complete cynic would judge a film like this in the same way or on the same level as ‘The Godfather’ or ‘Citizen Kane’, and there is pleasure to be had from an uncomplicated film, but the completely humourless ‘Alone in the Dark’ delivers very little that can recommend it. It’s even more depressing when you think that Boll has managed to get his hands on the rights to make the superb ‘Far Cry Instincts’ into a film at some point in the future. One can only hope that the magnificent ‘Half-Life’ franchise is being jealousy guarded by someone who knows what to do with it.