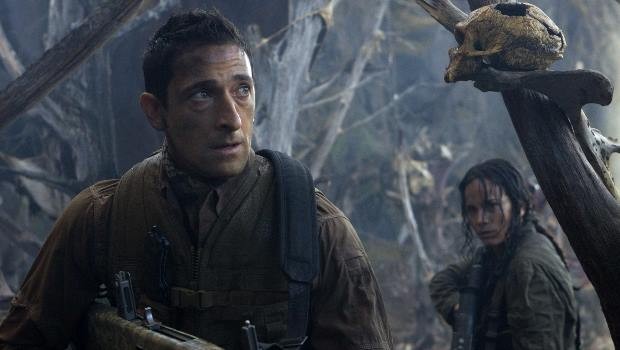 Summary: I will probably watch AvP more often that Predator 2 or Alien Resurrection and visually there is a lot to enjoy in the movie.

Back in ’95 when I was 15 I remember pumping about 20 quid into an arcade machine on a French campsite. The game was ‘Alien vs Predator’ – and since then I’ve been arguing with people about who would win in a fight between the two extra-terrestrial species. I’ve argued both sides, my choice usually depending on which of the six Alien and Predator films I’d seen most recently! Nearly a decade later we have the film that will settle the arguments. The Aliens go up against the Predators in a stand up fight that promises “Whoever wins… We lose”.

With so much hype and resident knowledge about the Aliens and Predators present in the films expected audience, director Paul W.S. Anderson must have found himself stuck between a Praetorian and a Spearmaster. The problem he and the others involved in the film faced is how lame humans are! From the characters of the six previous films we must be looking at a death rate of at least 80-90 per cent. And most of those buy it quickly, albeit painfully! With such a poor record of going up against these killing machines separately, what chance do we having facing both of them at once? Maybe a film called Alien vs Predator shouldn’t bother with the distraction of mutilating countless soft pink bodies and concentrate on the armor and acid blood of the big bad boys.

To leave humans out would have been a brave decision and possibly resulted in a film more catered towards existing fans. I understand why they didn’t do this and tried to make a film you could watch without having done your homework on over 10 hours of previous films… but they failed. What they’ve ended up with is the opposite. If you came to AvP having not seen any of the previous films, (if you’ve been on a 25 year long deep space mining trip, for example), you’ll probably find little to like. The plot is thin, the dialogue clunky and the characters annoying.

The film is stocked to the gills with flaws, including the small things that make it ‘unbelievable’; for instance, the hieroglyphs expert that has no trouble in immediately deciphering the pictograms on the walls of an alien temple. And who then helpfully explains to us the origins, intentions and nature of its occupants in one flashback aided soundbite. I wanted the smug bastard cocooned after about 10 minutes!

But I refuse to blast this film out of the airlock. If you’re an existing Palien fan you’ll find you enjoy this film despite itself. The Aliens and the Predators do get down to some street rules and some of the fight sequences are brilliant. Most of the subtleties, such as different types of alien or weaponry from the two legacies, appear, including even some that were developed outside the actual films in the multitude of video games and other piggy backing paraphernalia.

The film acts as a vehicle for these fight scenes. Even the temple where the carnage is set acts as referee periodically separating the two factions. What happens to the pink ones in the moments of separation is of little consequence and as you might expect we’re looking at a failure rate of 80-90 per cent again.

I will probably watch AvP more often that Predator 2 or Alien Resurrection and visually there is a lot to enjoy in the movie. It also sparked as much conversation amongst the people who have seen it as the possibility of it being made ever did. Some disputing the result, others trying to decide where it fits with relation to the other films and most writing the sequel off the back of the potential filled ending. “Game over man, game over.”? Hopefully not.

All you need to have done to enjoy this film is seen at least one of its predecessors, which I bet you have.