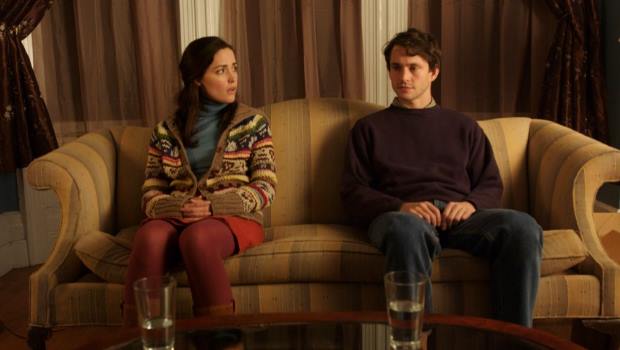 Summary: An unusual romantic comedy, Adam is a bit like its hero, confused but ultimately charming in its own offbeat way.

If you liked Rainman, I Am Sam or What’s Eating Gilbert Grape, you will probably enjoy Adam, in which Hugh Dancy stars as the eponymous hero. Adam (Dancy) is a sweet, lonely young man who, since the death of his father (and only real connection with the outside world), has lived an increasingly withdrawn, highly structured life, until he meets his new neighbour Beth (Byrne).

Beth quite likes the look of Adam’s awkward geekiness (he’s Hugh Dancy, so what’s not to like), but cannot figure him out; what she doesn’t realise is that Adam has Asperger’s Syndrome, a form of high functioning autism that makes it hard for him to read other people’s emotional cues or to understand when people speak metaphorically. Getting to know Adam better, and learning more about his particular interests and passions, Beth decides not to let this put her off, and the two embark on a relationship that is, while a metaphor in itself for all the problems that arise in any relationship, is also clearly doomed, from the moment Beth tells Adam that she recently had her heart broken, needs to take things slowly, and asks him not to hurt her…

While Adam does have something to say about isolation and the difficulties of finding love – and making it last – it did feel a little bit ‘disorder of the month’, as if a boyfriend with Asperger’s might be the latest must-have accessory, like a Labradoodle or a Mulberry bag. It seems unlikely that Beth, as a trained school teacher, would not know more about the condition; she is initially loving and sympathetic but inevitably soon loses patience with Adam, which is completely understandable but simultaneously daft. It’s hard not to feel that Beth is in some ways patronising Adam; their relationship can never be one of equals because on a fundamental level he cannot understand her, and never will. The film also loses focus by bringing in a distracting subplot about Beth’s father (Gallagher) and white collar crime to make a point about trust that feels clumsy and contrived (though it was nice to see Amy Irving back on the big screen).

However, this narrative weakness is partially compensated for by strong performances from the two leads, who have real chemistry, and who show in their different ways how guarded, isolated and uncertain people can become. Beth, a spoiled only child, brings her own issues to the relationship, but we see how they share a sense of wonder (she is an aspiring children’s writer) that sustains them, at least for a while… Director Max Meyer also brings some deft comic touches to the script and, refreshingly, shows Adam as capable of mocking his own condition (with a nice dig at Forrest Gump). An unusual romantic comedy, Adam is a bit like its hero, confused but ultimately charming in its own offbeat way.