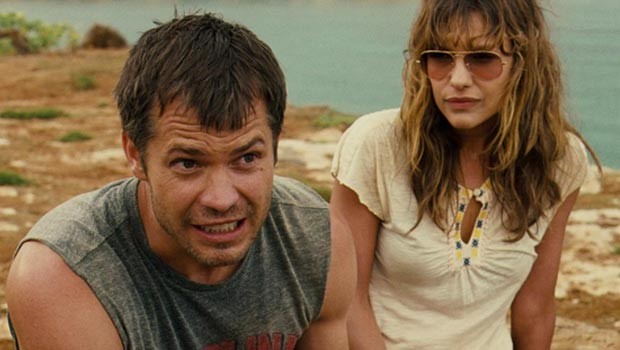 Summary: It might not win any awards, but for me it was a very enjoyable getaway.

Funny, really, how trusting people are on holiday. You’re relaxed and happy and you find yourselves sitting in a bar with another couple roughly the same age and chit chat chit chat – next thing you’re best mates and asking them to be godparents to your first born. But what do you really know about them? This is the basic premise of A Perfect Getaway, a fun new thriller by David Twohy.

We open on video clips of the wedding of Cliff (Zahn) and Cydney (Jovovich); the happy couple then travel to Hawaii for their honeymoon. Being adventurous, they aren’t content with the usual honeymoon activities; they plan to backpack to one of the most remote and peaceful beaches on the islands, which can only be reached on foot or by kayak. They believe they’ve found Paradise. While picking up supplies and permits in the local store, they encounter a couple, Kale (Hemsworth) and Cleo (Shelton), whose slightly odd and aggressive behaviour makes the slightly timid Cliff a bit nervous. As they set out on the hike, they meet Nick (Olyphant), who offers to walk with them the first part of the route, and run into a bunch of girls in a panic. A honeymoon couple have been brutally murdered and mutilated on Oahu, the next island. The police are searching for the killers, but think they might have left Oahu for one of the other islands.

Cliff is worried, but tries to keep his cool for Cydney’s sake. As they walk, Nick, a chatty sort, tells them a little of his history, much of which sounds spurious to say the least. He is excited to discover that Cliff is a screenwriter, and gently teases him about them working together, before inviting the couple to come for a swim in a waterfall a little way off the path. Cliff is, again, reluctant, but Cydney is keener, and Cliff gives in. It’s here that they meet Gina (Sanchez), Nick’s girlfriend. Uh oh! They’re a couple! And a slightly odd one at that – Nick explains that because he has a titanium plate in his head (!) he can smuggle knives through airports, and strings a bow to fetch their supper – a feral goat – which Gina skins, guts and cooks. Add to this volatile mix the presence of Kale and Cleo, lurking in the undergrowth, and the stage is set for full-blown paranoia.

Maybe I’ve been watching too many self important films lately, but I really enjoyed A Perfect Getaway. It’s slick and clever and funny, and never takes itself too seriously, while managing to deliver the requisite thrills. I found it immensely enjoyable, a quality lacking in many of this summer’s blockbusters. A lot of filmmakers seem to be mistaking gloom for depth – I blame Christopher Nolan, myself. The actors here all seem to be having fun – Steve Zahn playing against type as the nerdy, nervous Cliff, Jovovich bringing her own brand of wide-eyed charm as Cydney, prepared to be delighted at everything, Olyphant hilarious as Nick – he should definitely do more comedy.

But the revelation was Kiele Sanchez as Gina. I’ve never seen her before, but she’s just brilliant as Gina, coming across as a naive ditzy Southerner and only gradually revealing the steel underneath. She and Tim Olyphant work really well together. The script does keep you guessing though, Agatha Christie like, it’s pretty obvious with hindsight how the setup was executed. But it gives away the twist half-way through, only to twist and twist and and twist again. It might not win any awards, but for me it was a very enjoyable getaway.