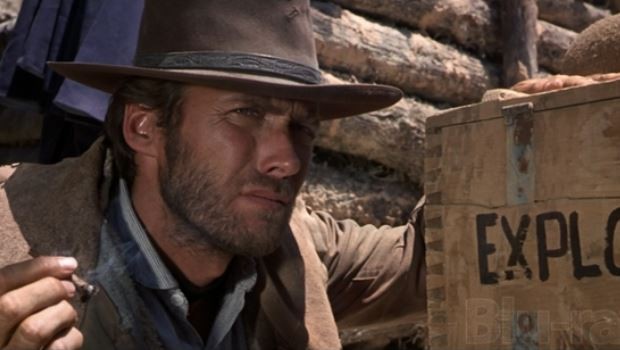 A Fistful of Dollars Review

This is Leone’s second major film – his first being The Colossus Of Rhodes in 1961 – and was the first to introduce Clint Eastwood as the iconic ‘Man With No Name’, a character that would return in the subsequent For a Few Dollars More and The Good, The Bad and The Ugly. Replete with poncho, brown cowboy boots, wide-brimmed hat and forever chewin’ on a cheroot, this character made an international star of Eastwood, then only know from the US TV series Rawhide, and transformed him into one of the most recognisable figures in film history. In actuality, Eastwood’s taciturn gunslinger was a different character in each of the three films and, despite his celebrated moniker, he did have a name in each – Joe, Manco and Blondie, respectively.

A remake of Akira Kurosawa’s Yojimbo, A Fistful Of Dollars is a tale of a stranger coming into town, pitting two rival gangs against each other just to make a bit of cash. Fistful… has all the elements that define Leone’s style of filmmaking; full of unremitting violence, gritty realism and tongue-in-cheek humour. Leone’s direction is taut and stylish, and the visuals are striking and everything is accented by Ennio Morricone’s wonderfully quirky and haunting experimental score. As this was Leone’s first real foray into the genre, he is not as confident as he will become in terms of grandiose style and dark humour in later films; nevertheless the seeds are sown here and it remains a wonderful cinematic experience.