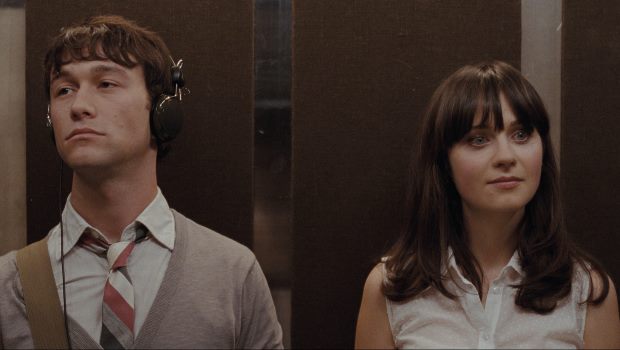 Summary: 500 Days Of Summer is more a drama with some funny lines and some good music. And none the worse for that.

Rom-coms, as a genre, don’t do much for me. As a general rule, they twist the relationships between men and women into unrecognisable caricatures of themselves and are often riddled with a nausea-inducing misogyny. 500 Days Of Summer is billed as the antidote to romcoms, so I gave it the benefit of the doubt. (Plus it stars Joseph Gordon-Levitt, who I have loved since Ten Things I Hate About You.)

Gordon-Levitt stars as Tom, a twenty-something would-be architect who has somehow ended up writing copy for a Los Angeles greeting card company. Tom’s life is ok – not particularly exciting, but he has a decent job and a nice apartment, and he gets on well with his colleagues. And then one day, in a meeting, he looks up and sees Summer (Deschanel), the new girl. Summer is The One. Tom just knows it. He is smitten; now he just needs to make her notice him. The problem is, Summer is cool. Tom is not. Or at least he doesn’t think he is. But one day she gets into the lift with him and they bond over their shared love of the Smiths. Gradually their friendship deepens into something more, but Summer is adamant; she doesn’t want a boyfriend. Tom, trying to be cool, pretends this doesn’t bother him. But of course it does; he wants their situation to be defined. Summer can’t see why they can’t just have fun, and the more he pushes her, the more she withdraws.

So far, so meh. Boy meets girl, boy and girl hook up for a while, girl leaves boy, boy grows up and learns some tough life lessons; its the stuff of a thousand movies. Its the basic premise of ET (with an alien instead of a girl of course). So what makes 500 Days Of Summer different?

The script is excellent, with some very funny one-liners. Anyone who has ever had their heartbroken will recognise many of Tom’s emotions, from his gushing paean to Summer’s teeth, and her laugh, and her ‘heart-shaped birthmark’ to his I hate Summer speech (in which her birthmark has mysteriously changed from a heart-shape to a cockroach); his utter inability to function (he presents an idea for a Valentine card with the loving message Roses Are Red, Violets Are Blue, F*&k You Whore), and the differences between his expectations and reality. It really skewers those moments where you say something that used to make your beloved laugh and they just look at you coldly and walk away. The performances are likewise excellent. As previously mentioned, I love Joseph Gordon-Levitt, and he is charming here as a young man in love. Zooey Deschanel, the indie poster girl of choice, is here sympathetic as the object of Tom’s affection. She is, after all, just another girl with her own set of problems, but Tom bestows every virtue under the sun on her. No wonder he is disappointed when he finds out his idol has feet of clay.

The film is edited in a non-linear fashion, which keeps you guessing; we see Summer and Tom unhappy and then rewind and fast-forward. This isn’t as clever as it thinks it is, mainly because the film is pretty straightforward. But it scores in other ways – it has little moments of magical realism which take you right into Tom’s head, like the morning after his first night with Summer when the whole world is full of sunshine and he’s the star of his own musical. The only false note was Tom’s precocious/annoying little sister-cum-agony aunt Rachel (Moretz).

In the end, the rom-com label is misleading; 500 Days Of Summer is more a drama with some funny lines and some good music. And none the worse for that.