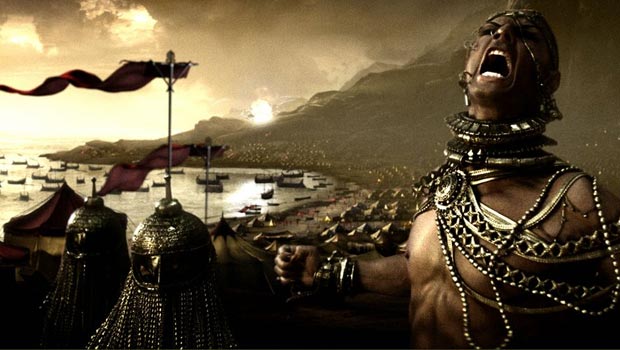 Summary: 300 sets the bar high enough, and is enjoyably silly.

A few years ago I was at a premiere party; having consumed a couple of pints of Lanson, I was having a lovely time, dancing away. This bloke came over to me and said ‘do I know you?’. Assuming it was a case of mistaken identity, I replied, ‘I don’t think so’ and tried to walk on, but he insisted, flirtatiously, ‘I do know you’, so I humoured him and said ‘where do you think you know me from?’; he, very smoothly, replied ‘From the dance floor’. I, being rubbish, laughed and went on my merry way, only to be informed by my friends that a) the man had been flirting with me because he fancied me (I am very stupid about these things) and b) that he was the actor, Dominic West.

What, you may well be wondering, does this anecdote have to do with 300, the latest adaptation of a Frank Miller comic? Well, 300, being an epic set in Ancient Greece, has a cast of largely British actors, including Gerard Butler, Lena Headey, David Wenham and said Mr West. Oh well.

Leonidas (Butler) is King of Sparta, that ancient race of warriors who believed in tempering the body and spirit through various unpleasant trials including abandoning weak babies at birth. (Greece at the time was still divided into city-states each ruled by their own kings, but with an embryonic form of democracy starting to operate in Athens.) Sparta, and all of Greece, is under threat from the army of Xerxes (Roderigo Santoro), King of Persia, who has been cheerfully conquering Asia Minor and now has his sights set on Europe. Ambassadors come to broker a settlement, encouraged by West’s wiley and unscrupulous politician, Theron.

Leonidas, however, has no intention of bowing before Xerxes, and, egged on by his unfortunately named Queen Gorgo (Headey), decides to take the fight to the Persians. Leading a handpicked crew of 300 of his finest men, he sets out to face the invading horde.

300, like Sin City, is based on a Frank Miller comic, and, also like Sin City, was filmed entirely in front of green screens; the backgrounds are virtual, though the actors of course are real, enabling the filmmakers to reproduce Miller’s vision of the tale to life. Like Sin City, the film looks stunning, especially when seen on the incredibly huge screen at the IMAX, though epic armies are less effective en masse. But 300 is ultimately empty, though Miller fans will love it, and the bloody violence and cast of gorgeous, hunky, pretty much naked Spartans is entertaining enough.

In common with many epics, the script is performed in an annoyingly declamatory style; no-one can just speak, they have to proclaim. Gerard Butler is particularly guilty of this; he also sounds like Sean Connery, which is odd as no-one else in Sparta has a Scottish accent. In addition, he is hampered by an enormous beard (to help identify him when he’s wearing a helmet, I suppose). The Spartans don’t seem to have had much use for clothing, their armour consisting of greaves, helmets, shields, red cloaks and leather nappies. As they are all really buff, this is not unpleasant; their fighting style is also athletic and graceful. Unfortunately they are pitted against ‘The Immortals’, who sadly turn out to be about as much of a threat as Saruman’s ‘invincible’ orcs in The Two Towers. Until the Spartans weaken and show a little weakness, the outcome of the early fights is a foregone conclusion. It’s also clear who ought to win – the manly Leonidas, risking his own life, is pitted against the corrupt, effeminate Xerxes who sits well back on his litter, twiddling with his many face piercings, while letting his war rhinos do all the work.

Still, as the first blockbuster of the year, 300 sets the bar high enough, and is enjoyably silly.