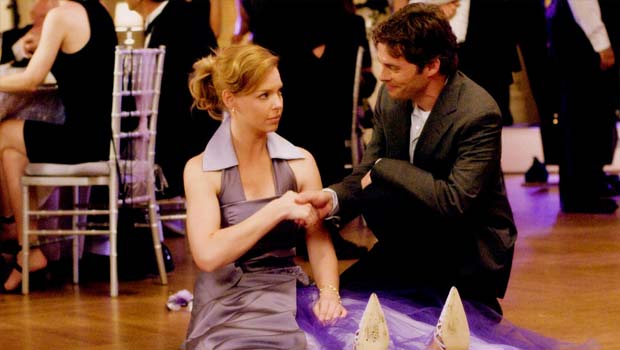 Summary: And it’s her performance that lingers long after 27 Dress has been discarded in the chick flick-by-numbers vault of blessedly forgotten cinema.

Proof that a winning central performance can save even the most formulaic romantic comedy from boring snoredom, the otherwise unremarkable 27 Dresses should herald Katherine Heigl’s arrival as an A-list actress.

Defining the old adage “always the bridesmaid, never the bride”, Heigl is Jane, a hopeless romantic with a devotion to weddings that borders on mental disorder. Since childhood, Jane has been assisting others down the aisle, resulting in a wardrobe groaning with 27 bridesmaid dresses – all monstrosities.

Director Anne Fletcher opens with an amusing, moderately insightful sequence showing Jane double-booked at two ceremonies. Intercutting snappily between an affluent-looking engagement in Manhattan and a lively Jewish-Hindu union in Brooklyn, her heroine switching outfits in the back of a cab, Fletcher zips speedily between the two venues to suggest that regardless of faith, wealth or cultural diversity, most modern marriages are essentially the same: conventional, stage-managed affairs.

Regrettably, the satirical possibilities of this are never explored. This is despite the arrival in Jane’s life of Kevin, a cynical wedding reporter trapped in his niche career precisely because he’s so good at presenting rose-tinted reports of nuptial joy for those, like Jane, who are addicted to his column.

Played by X-Men’s James Marsden, Kevin is handsome, smug and not a little creepy. But the clichéd conventions of romantic comedy ensure that the instant we meet him, we implicitly understand that this is Jane’s Mr Right masquerading as Mr Wrong.

At the posher of the two receptions, Jane is knocked unconscious in a stampede for the bouquet. Kevin gallantly brings her round but later rifles through her diary, establishing her perennial bridesmaid status as the basis for a big human interest story.

Jane though, only has eyes for her rich, tediously perfect boss George (played with an intensity approaching somnambulism by Edward Burns), who appreciates her efforts as a PA but remains oblivious to her true feelings. Ignoring the incessant tuts from her eye-rolling, flaky friend Casey (a well cast Judy Greer), Jane pines in frustrated silence until her glamorous younger sister Tess (Malin Ackerman) arrives in the city, beguiling decent, honourable George with her blond locks and fabricated lifestory.

After their whirlwind romance, doormat Jane finds herself condemned to arranging George and Tess’ wedding. Modelled on her parents’, it’s the ceremony Jane dreamed of for herself. But trouper that she is, she holds her tongue in the face of Tess’ selfishness.

Naturally, Kevin is assigned to report on the wedding but secretly develops Jane’s story instead. Hostility between the jaded hack and depressed maid of honour flares until they’re frantically ripping each other’s clothes off during a wet and stormy night that sees them getting drunk and serenading a bar with an improvised duet of Elton John’s Bennie and the Jets.

For all the supposed obstacles to Jane’s happiness, 27 Dresses’ plot unfolds like clockwork, with all the characters reconciled and an unapologetically saccharine ending. Playing selfless, clever, flawed and funny, the beautiful Heigl strives hard to convince as the dowdier and shyer of the two sisters. And it’s her performance that lingers long after 27 Dress has been discarded in the chick flick-by-numbers vault of blessedly forgotten cinema.