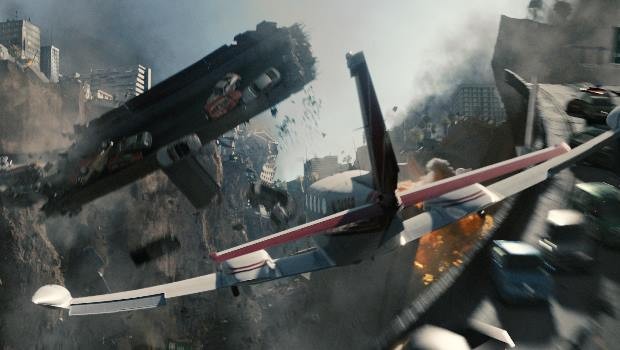 Summary: The problem with such CGI heavy films is that the effects rapidly pall.

2012. A quick google reveals (and the credits explain) that this is the year the Mayan Calendar runs out. Whether you believe that the Mayans knew something we don’t or not, some cranks, sorry people, believe that some galactic catastrophe will overtake the planet and life on Earth as we know it will end. This is the starting point for Roland Emmerich’s 2012, a disaster porn movie that takes The Day After Tomorrow, adds a pinch of Independence Day, stirs it all about with a gallon of CGI and a tablespoon of conspiracy theory; the result is the perfect recipe to clean up at the box office.

Today, Adrian Helmsley (Ejiofor) discovers with the help of fellow scientist Dr. Satnam Tsurutani (Jimi Mistry) that the earth’s core is heating up at an unprecendented rate. Luckily climate change is no longer being ignored by the powers that be, so he is appointed leader of a team tasked to find a solution. Two years later, failed writer and driver to a Russian billionaire, Jackson Curtis (Cusack), is headed to Yellowstone Park with his kids for one of those dreaded weekends with Dad. In Yellowstone, something is clearly not right. The camp sites are now fenced off and there’s a large military presence in the centre of the park; Jackson and the kids are caught, but Helmsley recognizes Jackson (being one of three people who actually bought his book) and they are allowed to go. Jackson’s ex-wife, Kate (Peet) and boyfriend Gordon (McCarthy) are caught in a violent earthquake and she begs him to bring the kids home, but it’s too late. The earth’s crust is rapidly destabilizing and Los Angeles is destroyed. Jackson, Kate, Gordon and the kids just manage to escape in time; Jackson discovers his employer heading for a plane and realizes that the rich and powerful have been preparing for this all along.

From this point there is less a story than scenes of various parts of the world being destroyed, from the White House (smashed by the SS John F Kennedy…) to the Vatican to Tibet. The tsunami and superfreeze of The Day After Tomorrow have been superceded, but the story remains the same; a plucky group of survivors escape due to their wits and resourcefulness. Emmerich delights in destroying icons; the desperate prayers of the crowds in St Peter’s Square fall on deaf ears; the US President elects to stay behind and leave the building of the new world to the young, but our own dear queen has no such compunction, bringing two corgis but not, apparently, Prince Philip.

Unlike The Day After Tomorrow, this is not a manmade disaster. The ‘science bit’ at the beginning explains that this version of global warming has something to do with planetary alignment and could not be stopped. However it cannot be questioned that the rescue package is both cynical and stupid; Russian oligarchs and elderly monarchs have their uses, but one questions how good they would be at plowing a field or caring for livestock. Still, I’m sure this is not what people are asking about the film; all they want to know is, are the effects any good?

The problem with such CGI heavy films is that the effects rapidly pall. Scene after scene of CGI bodies falling into CGI crevasses carry no emotional resonance. In a film like Titanic, silly though it sometimes was, we had spent time with people on the ship. When they died we felt their pain. Here, we feel nothing for the cannon fodder that Emmerich dispatches so callously. Ironically, this is the opposite of the message of the film, which is ostensibly one of cooperation, humanity, a brave new world. Not a great start.