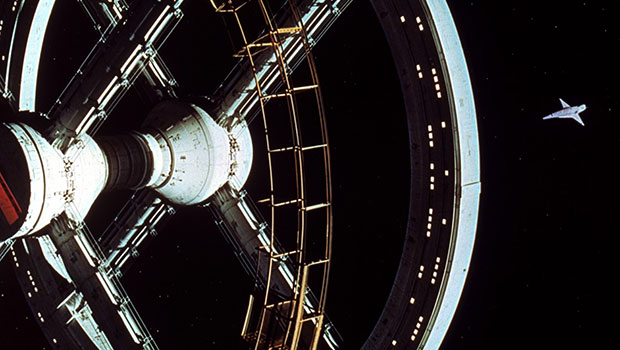 Kubrick’s Milestone cinematic achievement exists still as much more than merely a technical tour de force, an exhaustive and intricate examination of the art of filmmaking, it is a film that, remaining true to Arthur.C.Clarkes’visionary utopian intentions, seeks to provide an insight into the very nature of mankind.

2001 presents the viewer with a collection of abstracted notions, pertaining to human progress, endeavour and the voyage of discovery. Discovery is presented as an introspective concept, as much as an outward looking one. Man looks to define himself, through the metaphor of space travel. With each monumental thrust onwards and upwards manifested as a physical movement or action, from the prologue at the dawn of man where early humans harness the power of rudimentary tools in the form of animal bones, to the voyage to illuminate the dark secrets of Jupiter, more is revealed of the nature of man, and how much more there is still to achieve. The initial use of the animal bones in the prologue are malevolent, to ward off rival tribes, revealing man’s hostility towards his brother. Similarly the film’s final, startling image of the star-child looming over the Earth like a benign deity, full of innocence and hope, illustrates that man has merely peeked through the keyhole of a door that heralds a new age.

The film is paced in a very deliberate manner. More than any other 2001 gives the impression that each and every shot was conceived and executed as a labour of love, excuding patience and thought. The extreme craft in the cinematic choreography of the opening space sequence, set beautifully in time to Strauss’ Blue Danube Waltz, contrasts the savage beauty of the opening insight into prehistory. The title signalling, at the beginning of the film, that we are positioned early on in man’s development towards civilisation, is followed by a number of sumptuous fixed camera shots of various stages of sunrise, wherein the light radiates an almost tangible quality.

The process of viewing 2001 (I recently had the pleasure of seeing it again at the cinema in a restored 70mm print) makes unexpected demands upon the spectator. The film overcomes the senses, relentlessly engaging the spectator’s gaze. Just as Dave Bowman is unable to draw his eyes away from images of the final section, the viewer becomes thoroughly absorbed, mesmerised into complete devotion to the screen.

The artistic vision of 2001 is matched and in many ways enabled by the revolutionary special effects techniques pioneered by Douglas Trumbull. Kubrick’s lens is allowed to move into the space between “celestial objects”, as ships and space stations appear to pass into and out of shot. Similarly the interior shots are dynamically crafted to give the impression of three-dimensional movement in space. An intricate combination of camera movements and flexible sets provides a jarring otherworldliness to apparent life in space.

Kubrick has essentially created a space opera with 2001. Many have criticised the cool technicality of the text (like many of Kubricks other films) that it lacks a feeling of warmth for humanity, I find this wholly unfounded, 2001 questions the very nature of what being human actually means in very stripped down and basic terms. Furthermore, Kubrick also questions the very essence of cinema, by addressing and reformulating the limitations of the medium. 2001 alters the relationship between sound and the image, expands the technical possibilities of the medium and exists, in simple terms, as an example of cinema in its purest yet most optimistic and limitless terms.