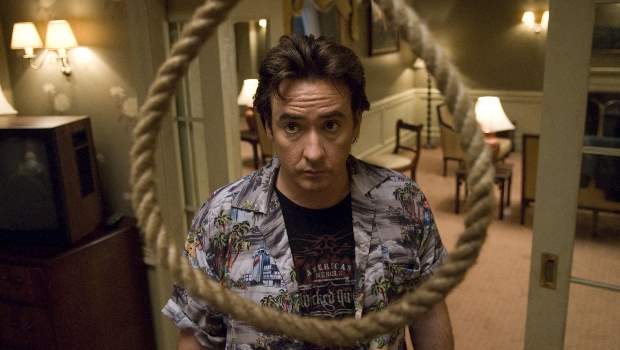 Summary: For all of 1408’s shortcomings, all that’s really needed to lift it a level is some decent scares, but one or two spooky moments just isn’t enough.

The long list of mediocre Stephen King adaptations grows ever longer with 1408, a run of the mill thriller wrapped up as a psychological ghost story. Cusack is Mike Enslin, a non-fiction writer on paranormal activity who doesn’t believe in the spirit world. Recently separated from his wife, he spends his life in out-of-the-way hotels researching his “Most Haunted” style books with little enthusiasm.

When he receives an invitation to visit the Dolphin Hotel in New York and spend the night in room 1408, which has apparently been the scene of fifty-six deaths over the years, it’s just another job to accept with scepticism. On arrival, Jackson’s hotel manager repeatedly implores him not to venture into the room, warning him that no one has ever lasted more than an hour without going insane or dying. But Enslin is not about to be dissuaded and checks in, perhaps never to check out again.

When the build-up in a horror is better than the execution, something isn’t quite right. Enslin is drawn nicely in the opening scenes while Cusack’s big exchange with Jackson is sharp, tight and funny and leaves us itching to get in to room 1408. Once we’re there we get another reel or two of slow creeping build, as Enslin gets the first hints that all is not well with the room – wonky taps, suddenly appearing chocolates, a radio alarm with a life of its own. Escalating into visions and apparitions of dead guests, the effect is eerie and calculated. But it all too quickly descends into loud, cheap and nonsensical, director Håfström resorting finally to throwing special effects at the screen without rhyme or reason. As for what is actually supposed to be happening in the last twenty minutes, that’s anyone’s guess.

Cusack too is far better in the early stages than he is once the haunting starts. As a weary, cynical wiseass, he’s in his element, pinging putdowns to anyone who bores him. If he’s less convincing (though still watchable) as a man losing his mind, it’s because he plays the second half the same as the first, as though he’s not quite committing himself to being in a horror film.

For all of 1408’s shortcomings, all that’s really needed to lift it a level is some decent scares, but one or two spooky moments just isn’t enough. As for King on film, if there’s one director who seems able to do his stuff justice (Rob Reiner apart), it’s Frank Darabont, and his upcoming release of The Mist promises much. Here’s hoping.