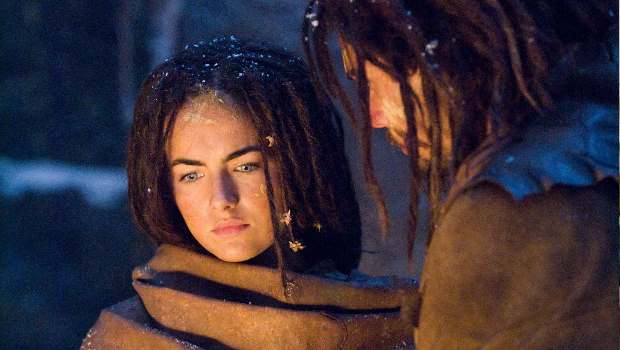 Summary: 10,000 BC is a load of tosh. Highly entertaining, but tosh nonetheless.

D’Leh (Strait) is one of a remote tribe of mammoth hunters, the Yagharl, who eke out a precarious existence in a remote mountain encampent that could politely be described as a dump. D’Leh is an orphan and, while not precisely an outcast, is shunned by the tribe because of the actions of his father – once the tribe’s lead warrior, carrier of the White Spear, he abandoned the tribe, and is considered a coward. D’Leh, by extension, the son of a coward, forms a bond with another outsider, the blue-eyed orphan, Evolet (Belle), who the Yagharl adopted. Evolet is considered by the tribe’s spiritual leader, Old Mother (Hammond), to be central to the future of the tribe. She, and a great hunter who will inherit the White Spear, will lead the tribe to a new life. For every year the mammoths come later.

When Evolet and other members of the Yagharl are captured by ‘four-legged demons’, D’Leh leads a small group of warriors to save her, and during the course of their epic journey finds himself.

10,000 BC aroused mixed feelings in my breast. For starters, I actually quite like Roland Emmerich; he makes silly but enjoyable films like The Day After Tomorrow and Independence Day which fail miserably to hold up under any kind of critical scrutiny but are still manage to be jolly good fun. Who didn’t, secretly, love seeing the White House explode and Will Smith punch an alien in the face? 10,000 BC follows in this pattern and bears a close resemblance to Emmerich’s earlier film Stargate minus the extra-terrestrial travel element (though it does slip in a vague reference to Atlantis and seems inspired by some of the more loopy writings of Swiss pseudoscientist Erich von Daniken). As D’Leh and his not so merry men travel, rather improbably, from snow-capped mountains to tropical rainforest to baking desert, they encounter, in addition to mammoths, sabretooth tigers and some kind of giant, flightless,flesh eating birds, which I imagine are based on the moas of New Zealand, before finding themselves on the banks of the Nile and in the midst of a civilisation that is beyond anything that they could have imagined.

For Jaye Davidson seems to have passed on his taste for interior design, and the Yagharl and other tribespeople have been brought to the Nile to build a giant, gold-topped pyramid in honour of a mysterious and tyrannical god who we never see but who sports a fetching array of silken draperies and platform shoes. It’s all very confusing, as D’Leh’s people can barely cure animal skins yet the desert people wear woven cloth and ride horses, not bareback, but with molded leather saddles and bridles, and have obviously learned to work metal. Perhaps the Yagharl are just touchingly backward? But this isn’t the point. Is the action any good?

The film is surprisingly talky and takes ages to get to the first big action set piece – there’s far too much rattling on about prophecies and muddy-faced cave people dancing – but when we do get to the first big mammoth hunt it is genuinely exciting. The sabre-tooth tigers are less successful with some dodgy CGI and we don’t really see the giant birds, as they handily live in a habitat of very tall grass. The performances don’t really matter – Steven Strait is a bit too muscular as D’Leh but plays prehistoric surfer hero well enough; Camilla Belle is a bit feeble as Evolet, and they are both very pretty which is the most important thing. Everyone’s teeth are far too good, and you know who the important cast members are because they have cleaner faces. I just wish the filmmakers had been a bit more willing to laugh at themselves and not take the whole thing quite so seriously – then it could have been loads of fun.

DVD extras include various ‘making of’ documentaries, an alternative ending, and addional scenes, all in a very nice shiny embossed tin. It’s all about the packaging you know.