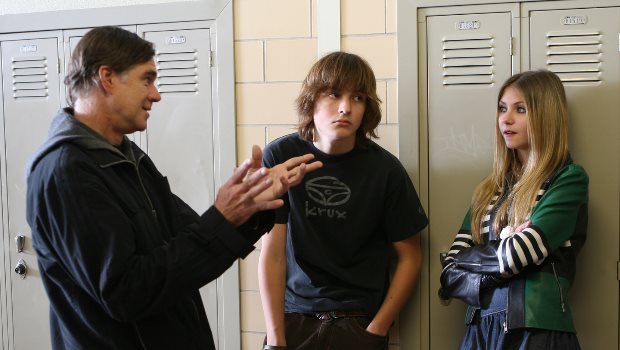 An interview with Gus Van Sant, director of Paranoid Park.

FM: Why did you adapt Blake Nelson’s novel?
Gus Van Sant: It was a story set in Portland, which I always like, it was about an amateur skateboarder, and this was also interesting. It was also about a particularly stifling predicament, which was also an interesting thing in the story.

FM: Did you change the structure of the narrative?
Gus Van Sant: I played with the story structure a lot. There are not many parts of the movie that are not from the book, but structurally it is quite manipulated.

FM: Why did you choose to recruit your actors via a MySpace page?
I think this is how all casting agencies would go about casting high schoolers, especially now when MySpace is so prevalent. So we were like the others, just trying to figure out ways to get the word out to non professional people to play in the film.

FM: Why did you decide to shoot both in Super 8 and 35mm?
Gus Van Sant: Because the medium of skate film is super 8, and also video tape, and since we were using a little of this in our film, we shot some additional skate footage with super 8. It is a lot harder to hold a larger camera while you are riding a skateboard, this is one of the reasons. Also 35 is a medium that is too expensive for skate shooters to be using. Then the rest of our film is made in 35mm, the medium of choice for me.

FM: Choosing Chris Doyle may have appeared surprising, following your last three movies which depended a lot on stable frames. Why did you choose him?
Gus Van Sant: Chris is known for a very fast flying and free cinematography. Not known for what would be called stable frames. But I think maybe that is because of the Wong Kar Wai period of the nineties. When he first started to shoot with Kar Wai, they were quite stable, when they composed the framing, but got really loose as the films became less conservative. I did try and push Chris into non stable territory, and wide angle territory, also because of these later Kar Wai films that I had seen, particularly FALLEN ANGELS. But Chris was a bit wary, saying “Well, we don’t want to repeat ourselves.” So what we have here is a new piece created by us, that at times is unstable, as concerns the tripod, its handheld, but only sometimes. It has a lot of different styles in it. There is a lot of slow motion, which I also encouraged, and came from some of my knowledge of later Kar Wai films. But Chris also, has made among other things, LADY IN THE WATER which has very stable framing. The skate world, however, is not known for stable framing, because that world is on wheels.

FM: I heard that some sequences, notably in Super 8, were to be longer at first. There is also a lot of work on the sound. What has post-production consisted of?
Gus Van Sant: No, I think that the super 8 sequences were about the same as in the film, maybe a few more skate sequences. The sounds, detailed as they may be, are mostly soundscapes by Sound/Music composers. The stuff that we have done as sound manipulators is pretty simple, but the soundscapes, largely by Ethan Rose, are quite complicated. It is sometimes the equivalent of us playing records along with the movie – but the music is made of less traditional music. The post production was not that intensive and occurred over a couple of weeks. Leslie Shatz is the sound designer.