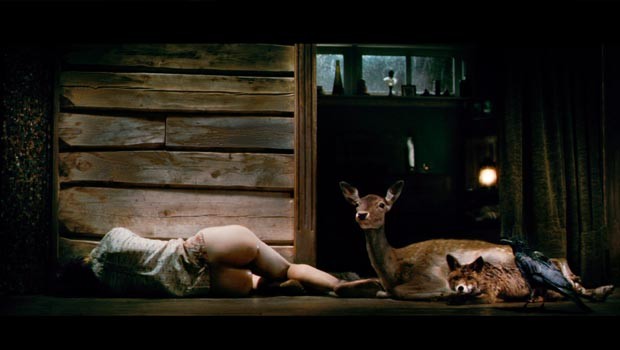 With Lars Von Trier’s Anti Christ hitting the headlines for all the wrong reasons, Future Movies looks at other films that got our knickers in a twist

Prostitution leads this desperate story of a country boy trying to make a fun dollar in the city. Joe travels to New York with aspirations to be a commodity for upper class house wives who, neglected by their husbands, should need a gigolo. The Stetson clad boy is unfortunately hindered by his lack of sophistication and inability to perform, which leaves him reeling with frustration. Barren pockets and desperation lead Joe to darkened movie theatres and grim hotel rooms where he begins to perform homosexual acts. These closeted moments make Joe a vulnerable target and lead to his savage murder of a client.

The film depicts a dystopian world in which free will has created a malicious new trend, ultra violence. The audience follow Alex and his gang of droogs as they torment, beat and overpower bystanders to gain a greater status amongst the gangs. The cult imagery was replicated, however, by aspiring criminals who wore masks similar to those in the film when undertaking their own crimes. Director Kubrick responded to the intense media pressure and death threats to his family by imposing a UK ban on the film which lasted until his death.

On shooting actress Sandra Peabody was so traumatised by the intensity and reality of the infamous rape scene in which she played victim Mari Collingwood, that she reportedly left the set. The scene itself is a sickening display of inhumane activity, as the camera captures every gleeful moment a group of convicts after they kidnap two girls and take to their bodies as though they were canvases for their animalistic desires. The teenage friends are forced to perform acts on each other, raped, disembowelled and finally strangled.

An unfortunate swimmer is repeatedly raped by four men, who savagely work together to render her helpless after they seize her on the banks of the lake where she had previously been skinny dipping. The gang’s graphic assault lasts for 40 uncomfortable minutes, in which the viewer is held within the camera’s passive perspective, watching as every humiliation the victim endures is graphically captured. The sexually premeditated revenge of the victim turned killer takes a callous route which didn’t agree with the stomachs of censors; taking to hanging, castrating, axing and disembowelling the perpetrators of the original crime.

The second film outing from the Monty Python crew prompted a reactionary fume and puff from vicars at the time of its release. The clergy claimed that the comedy sought to mock Christianity by drawing on the life of Christ as a parallel for Brian’s life, and asked that members of church congregations refrain from supporting the feature. Palin and Cleese fought back at these claims and blamed the similar setting and period as the cause for any crossovers. The film ends with Brian a martyr for the cause, suspended on a cross and whistling along to, ‘always look on the bright side of life.’

Director Lynch successfully breaks the illusion of the neat small town setting with a disturbing undercurrent which permeates the image of everyday life with several dark scenes. When the sexually intrigued, all American boy Jeffrey Beaumont watches nightclub singer Dorothy (Isabella Rossellini) through the crack in her wardrobe door, things begin to twist into a nightmarish landscape marred by sexual intrigue. The youth is fascinated by the rape of Dorothy by her gangster boyfriend Frank Booth (played with incredible conviction by Dennis Hopper) whose macabre sex game of acting as ‘daddy’ and ‘baby’ whilst sniffing nitrous oxide remains a disturbing focus point for audience.

A dark and disturbing view of the selfish viciousness of promiscuous youth, Kids follows the spread of AIDS in a small community of friends, apparently unsupervised by their parents one hot New York Summer. Telly, 17 and infected with the disease, hunts for teenage girls known to be virgins. Though the girls, some of which are under the age of consent, do agree to sex with Telly, it is their ignorance of and his knowledge of his own condition which disturbs the audience as he insists on unprotected sex. Uncaring, young and audacious the cinema verite style creates a grim picture of a generation who selfishly use sex as a weapon.