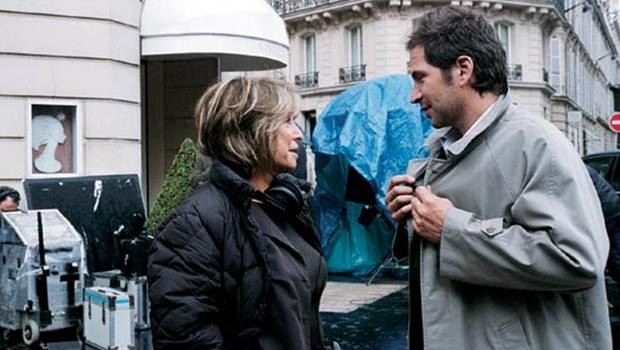 FM: Can you talk a bit about the genesis of the project?

Danielle Thompson: One night, coming out of the theatre, which is like the Covent Garden of Paris, and the set up of the film is absolutely true, there is the café, there is the hotel, just in one block. So I came out of there, and I looked around, and I thought, because unlike most areas of big cities, where everyone looks alike, has the same kind of life, depending where you are lucky enough to live or not. This place, unlike any other place, has a mixture of people – this little café – which is very unusual. So I called Christopher the next day and said there is something I think we should talk about, there is some kind of a tale, in these people meeting.

Christopher Thompson:It’s a setting, that’s the point that we work from and then basically building on these characters and finding out what we’re talking about, what we want to talk about, as the work is going on.

FM: In a film like this, with a big ensemble cast, how do you find the characters, and are there any who end up on the cutting room floor?

Christopher Thompson:Starting from this setting, and quite quickly realising that we want to talk about how we’re labelled in life, and how we build up these cages and these roles, talking about very very fortunate people who are still not satisfied and want something different. Then we talk about the characters, write about them, dig into that, and some just don’t make it.

FM: Catherine, the actress in the film, is successful by anyone’s standards, yet she is unhappy; she despises her work because it’s popular. The film deals with the relationship between high and low art – what inspired you to talk about this?

Christopher Thompson:This is what was wonderful about this setting, it gave us the opportunity to talk about these things…

Danielle Thompson: Which are true.

Danielle Thompson: It is true that you are labelled, and its very dangerous. You’re an actor, you need to work, you need to make a living, you are offered a soap or a television series – you know, the few people, like Helen Mirren, or George Clooney, who can go from one to the other, there are very few of them.

And these are real problems for these people; of course, it was interesting for us to speak about this particular dissatisfaction in someone who seems to have everything, to make a lot of money, be famous, work all the time – something that, at twenty, she would have signed for right away. Be careful what you want because you might get it. The pianist gets it too; he was obviously raised as a little boy to become exactly this. And this was one of the things we wanted to say: he doesn’t want to stop playing the piano, he wants to teach, he wants to play for people who don’t know anything about classical music.

Christopher Thompson:And he is part of high culture.

Danielle Thompson: He’s the opposite of her.

Danielle Thompson: And the costume.

Christopher Thompson:And there’s this triangle between Catherine, who does this show, she’s loved by Jessica who thinks she’s just the best thing, but the casting director says you can’t even talk to her, how she gets through these barriers.

FM: Jessica is the heart of the movie, and has this wonderful, na?ve optimism; she doesn’t know that she shouldn’t talk to certain people because they’re ‘important’, she just gets on with things. Is she based on anyone real, or entirely imagined?

Danielle Thompson: She’s not that na?ve. She’s open. She orders a Planter’s Punch very quickly, she’s not that na?ve. But she has nothing, she has this openness, no judgement, she likes people, likes phone calls, wonders who can it be. She’s someone very positive in the film.

Christopher Thompson:I’ve known people like her, you do run into people, life will hit them down but they go on, seeing the best in everything. They do exist, and all these characters that we’re talking about, they need some sort of eye opener, and that’s who she is. She is the sort of Tinkerbell, going around giving a little bit of her positiveness in the other characters.

She also brings a kind of fairy tale aspect to the film.

FM: When you were writing, did you have specific actors in mind for any of the roles?

Danielle Thompson: The only person we had in mind from very early was Dani, who plays the usher. The rest, we’d talk about actors, but really we started having ideas very late when we’d almost finished the script.

FM: How do you find working with yourselves, taking on different roles, as writer/director or writer/actor?

Danielle Thompson: Between the writing and shooting or acting, its when we’re in the editing room I ask Christopher to come back as has more distance and another point of view. This is when you question what you’ve written, look at the order of the scenes, things need to be cut.

Christopher Thompson:Often less is more, so you have to get back to the intention that you had.

Danielle Thompson: What did we really mean when we wrote this scene, what can we take away, what is possible to take away because its gravy. But in between, no.

Christopher Thompson:Essentially, it’s easy to go from one role to another. If there is a script question during the filming, obviously we find time to discuss it, but very little because the scripts, the way we write them, are very precise.