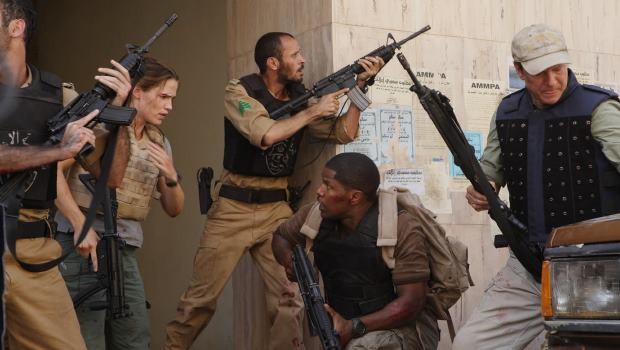 The War on Terror Meets the Hollywood Ending

The ongoing War on Terror doesn’t play by the Hollywood rulebook. The current lack of anything resembling a final act means that there are plenty of questions, accusations and statistics, but no closure in sight. As with Vietnam the cultural impact has been seismic, and having dealt with the events of 9/11 directly through the likes of Oliver Stone´s World Trade Center and Paul Greengrass’ superior United 93, Hollywood has now shifted its gaze to the wider conflicts that have arisen from the rubble. The past four months alone have seen the release of three star-studded studio productions – The Kingdom, Rendition and Lions For Lambs – all looking at different elements of the War, while the schedule for the coming months is peppered with similar offerings in the run-up to Awards Season. Terror, it seems, is the Serious Subject of the times, and with a US election year looming (and Daily Show presenter Jon Stewart set to bring topical comic-observation to Oscars 2008), Hollywood’s royalty are all keen to get a slice of the action.

Despite polished production-values and a strong cast headed by Jamie Foxx and Jennifer Garner, Peter Berg’s The Kingdom is less a comment on the War on Terror than a revenge fantasy featuring FBI agents tearing up Saudi Arabia, coincidentally (or not) the kingdom that produced the majority of the 9/11 hijackers. Marketed as an action-thriller with brains, the film was defined by a high-profile poster campaign showing Foxx prone with Kevlar vest, shotgun and shades. Seizing upon producer – and Heat director – Michael Mann’s reputation for technical realism, the studio thrust his name front-and-centre to promote the tale that opens with a devastating terror attack on a Saudi-based US housing compound.

Matthew Michael Carnahan’s screenplay phones-in a study of Middle East-West tensions, with the Saudis portrayed as mostly uncooperative and incompetent, while even the Americans come across as arrogant and revenge-driven. The reality, however, is that politics comes a distant second to the balls-out action promised by the poster imagery and bolstered by the “ticking time-bomb of a movie” poster-quote, originating from men’s mag Maxim. The film’s main selling point is a freeway ambush that leads to a kidnapping and subsequent takedown of a terrorist stronghold in a blaze of automatic gunfire. With Mann lurking behind the scenes, and Peter Berg rapidly establishing himself as a technically adept director, the action is expertly staged, but also more than a little vacuous given the context. Conveniently enough, the team end up killing the mastermind of the opening compound attack, in the process providing the Hollywood Ending that brings a kind of misguided satisfaction. “We’ll kill them all” whispers a traumatised Saudi girl, whose apartment has been ripped apart by small-arms fire during the finale. We discover her words mirror Foxx’s FBI agent as he comforted a colleague days earlier. The revelation is intended to create dramatic gravitas and draw attention to the notion of violence perpetuating violence, but there’s a sense that this is merely a token gesture, and that the death of the movie’s criminal mastermind totally justifies the long-term consequences, no matter how bad they be.

Carnahan is also the screenwriting brains behind Lions For Lambs, a self-consciously cerebral take on the conflict that features Peter Berg in a supporting role in one of three story strands. Taking a far more serious stab at the myriad political issues of the War, Carnahan spares only the US infantry from his and director-star Robert Redford’s stern finger of blame for America’s new quagmire. Co-starring alongside Tom Cruise and Meryl Streep (but sharing no scenes with them) Redford plays a West Coast political science professor trying to inspire a talented but disillusioned student. The film’s argument is that America’s apathetic youth are squandering their potential, while both the government and the media are guilty of hypocrisy for their parts in initiating and sustaining the conflict. Undeserving of the critical mauling its received on both sides of the Atlantic, the rhetoric may sound familiar, but the presentation nevertheless makes for generally thought-provoking filmmaking, especially through engaging scenes between Cruise’s committed Republican senator, and Streep’s veteran reporter. The chatter is undermined by a flag-waving thread involving two wounded GIs on tour in Afghanistan, which gradually signals Redford losing his nerve. The final act then nosedives into implausible melodrama and even condescension, culminating in the ludicrous sight of Streep’s veteran journalist choking back tears as she returns from the Hill finally ‘facing up’ to her network’s indirect roll in the ongoing slaughter.

Streep switches from enlightened journalist to cold-hearted CIA chief, in Gavin Hood’s Rendition, a drama that explores the CIA’s ‘extraordinary rendition’ policy, apparently significantly indulged since 9/11. Involving the covert transport of suspected terrorists to countries where interrogations can take place without legal concerns (with all the literally torturous trimmings that implies), the film found its cinematic release only months after the British government drew an apparent blank on an investigation into real-life CIA rendition flights, that allegedly used British airports as stopovers. The film focuses on an Egyptian-American abducted by the CIA on arrival in Chicago from a business trip, and flown to an anonymous North African country (clearly Morocco), for questioning, hours after a Morrocan suicide bombing kills a CIA operative. While the abductee is stripped and tortured by the local intelligence officer under the observation of Jake Gyllenhaal’s CIA rookie, back in the US the man’s wife battles a wall of silence in trying to uncover her husband’s whereabouts. Meanwhile, in a third strand, the daughter of the Moroccan intelligence officer has a secret relationship with a young man who is becoming radicalised in a local mosque.

While Hood does a good job exploring the CIA’s illegal (and perhaps ongoing) shuttling about of prisoners who may or may not be guilty, the film’s finale approaches and the narrative structure eventually makes more impact than its subject-matter. Suddenly challenging the audience’s assumption that inter-cut story strands are happening simultaneously (a la Lions For Lambs), we watch the radicalised teenage boy carrying out the film’s opening bombing, as Hood reveals that the events of this story-strand have happened a week prior to everything else. Cut back (or rather forward, as is suddenly the reality) to the interrogation and in a plot-device apparently borne of desperation, Gyllenhaal’s rookie has a crisis of conscience. In a plausibility-defying move he frees the prisoner himself after what’s been a week of brutal interrogation, even pausing to notify the American press of his actions as he orchestrates the getaway. As a relatively painless and tidy close, it’s a more palatable result for multiplex audiences.

All three films offer personal closures against the wider backdrop of a war with no end. The Kingdom offers a dead bombing mastermind with no home casualties and Rendition obligingly frees it prisoner, while, in Lions For Lambs, the media accepts responsibility for its part in the conflict, disillusioned youth are reinvigorated and soldiers fall bravely in battle. The conflict may be ongoing, but when packaged as a bitesize war, the elusive third act is easier to come by. In the coming months, the War on Terror will maintain its presence in multiplexes. Writer-director Paul Haggis’ In The Valley Of Elah, Brian DePalma’s Redacted, Nick Broomfield’s Battle for Haditha and James Strouse’s Grace Is Gone are all set to explore different elements of the conflict, from grief to mass-murder and back again. Even the origins of today’s political problems will be addressed, albeit in a light-hearted fashion, through Mike Nichols’ Charlie Wilson’s War, set during the Soviet invasion of Afghanistan in the 1980s when the CIA funded and armed Osama Bin Laden. Starring Tom Hanks, Julia Roberts and Philip Seymour Hoffman, it seems few are keen to miss out on the politics of the age, and there are doubtless many stories still to tell. All that’s missing, perhaps, is a real-life ending.