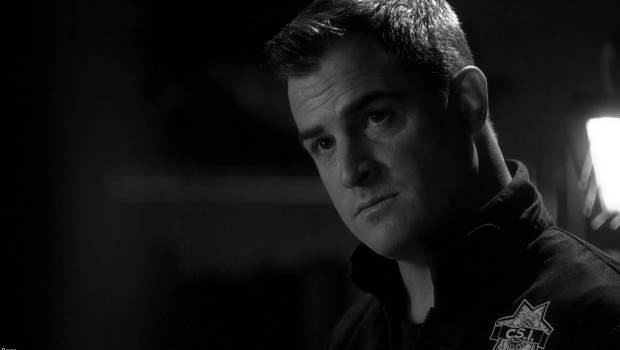 George Eads, aka Nick Stokes in C.S.I: Vegas, has clocked up 252 appearances across 11 seasons of the crime-solving television series. It’s become a worldwide hit and in season nine Hollywood’s Laurence Fishburne made the transition to small screen, becoming a regular fixture in season 10. With season 10 of C.S.I. now out to own, I caught up with George for his thoughts on the latest season and a reflection on how he got the role that broadcast him into homes across the globe.

Season 10 of C.S.I: Vegas opens with a famous bullet time sequence, the most expensive sequence ever filmed for television. In it the C.S.I. cast are pictured in different states of attack, and George was impressed with director Kenneth Fink’s abilities behind the camera. “I loved that opening sequence”, he said, “it’s one of my favourites we’ve done on the show. It’s fun to watch. I always hope to be the guy to do the cool thing the first time, and this was a first for TV. I really hope to work with Fink again.” The bullet time sequence used fishing line to hold objects in the air and simulate movement while the actors held their poses. It required Eads to pull a mean expression as Stokes chases after the bad guys. He added: “I’ve got an aggressive look on my face – I was thinking, could I get away with it? I loved seeing Fish karate kick that guy through the window.”

‘Fish’ is Eads’ nickname for Laurence Fishburne – Dr. Raymond Langston – the new main man of C.S.I. Eads is full of praise for the new leading man who completes his first full season on season 10. “It’s been great, he’s a really nice guy,” says Eads. “Fish is cool away from camera and it’s fun to be intense with him – he knows what he is doing.” In season 10 Fishburne gets a full taste of what life will be like on C.S.I. Eads explains: “Fish has some growth, has his life threatened, he goes full circle in the series. He is taking no S-H-I-T!”

Eads is a proud man to have been part of C.S.I: Vegas since the first episode back in 2000 as Nick Stokes. He said: “I have a lot of pride, I take notes at night, get a coffee as soon as I get to the office.” As the model professional, he is also keen to keep work out of the home, set to get married in the summer and start a family. He adds: “We’ve Been together since the first day we met and I try not to bring the work home. Sometimes we watch an episode together and rewind to rewatch scenes and laugh but I need to take breaks, after 10 months of filming I’m exhausted by the end of it so need to get out and play golf, grow my hair out and relax.”

Despite C.S.I. breaking through the 10 year mark, Eads is still as excited as ever to be Nick Stokes. He said: “C.S.I. is as fresh as ever. We’ve got the right people involved: 23 episodes is a lot, you’ve got to love what you are doing. The characters evoke, develop through the series. If you had a marathon session and watched all the episodes in one go you’d really see them change from start to finish.” Although Eads has become famous for playing George Eads, he never looked for the part in the first place and feels privileged to have been handed the role. He said: “After my audition the producer asked me ‘why do you want this job?’ and I replied ‘I need the work man, I just want someone to give me a chance’. I was hired before I got in the car to leave the office. I’ve been there since the start and I want to see it to the end – I hope to go out with a bang.” Looking ahead to the next series already airing in the States, Eads claims: “People are really going to dig season 11.”