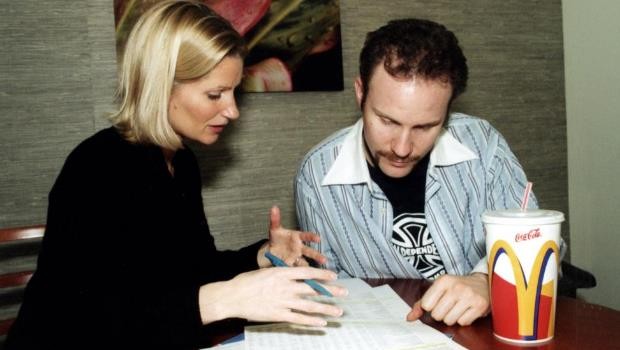 Even worse, the world and your grandmother know about it because your boyfriend is Morgan Spurlock and his movie, Super Size Me, the candid record of his 30-day McDonald’s-only diet is a global sensation. Grossing over $10million in the US alone, the movie won 32-year-old Spurlock best documentary director at the Sundance film festival. McDonald’s have since launched a massive advertising rebuttal of the film’s claims yet in the US quietly dropped the supersize option.

“It was a necessary evil,” sighs Alex Jamieson. A holistic health counsellor and vegan chef who advises clients on better diet, the 29-year-old shares a flat with Spurlock in New York and was horrified when he volunteered as a McGuinea pig.

“We were sat on his mother’s couch on Thanksgiving Day, stuffed to the gills when the idea came to him. And I just said: ‘No! Don’t do this!’ But I didn’t think it was going to be anywhere near as bad as it was.”

“At the time you couldn’t open a newspaper without reading about America’s obesity epidemic,” says Spurlock. “This was post 9/11 and pre-Iraq, so we were itching for some big news stories. And suddenly two girls were suing McDonald’s.”

A lawsuit against the burger giant by a group of obese teenagers, the case alleged that McDonald’s had created a national epidemic of obese children by misleading people into thinking their food was nutritious. Though ultimately unsuccessful, Spurlock spied the gherkin of his first feature film.

“I thought the girls were crazy,” he admits. “But the more I heard about the suit – the way McDonald’s targets kids from such a young age, how so many ingredients go into something as simple as a French fry or a chicken McNugget, I realised there was the basis for an argument.”

Filming in restaurants across the US, he set himself the task of eating nothing but McDonald’s three times a day, trying everything on the menu at least once, always choosing the supersize option if offered and taking the American average of no more than 1000 steps a day exercise. Over the month, he put on two stone, doubled his cholesterol and sent his blood sugar levels soaring. Consulting three doctors, one informed him he may as well be on a diet of scotch. Another said his liver was turning to pâté.

“I think I could have dug in my heels and changed his mind about it,” says Jamieson. “My favourite person in the world doing this terrible thing to himself, I was scared. But if you know Morgan you’ll know he’s totally dedicated and focused on his ideas. And my whole career has been about these issues, and I thought, well, if it works out, it could actually help some people.

“But it was tough. After the first eight or nine days, he was starting to feel really exhausted and everything was a struggle. He’s usually very outgoing and gregarious, but he was just so depressed and exhausted. And then on day 21 when he woke up with chest pains, that was ridiculous.”

“I couldn’t breathe,” recalls Spurlock, “so much pressure on my chest it felt like you were standing on top of me. The next day my blood tests were so off the chart, my liver so filled with fat, all three doctors said you have to stop because we don’t know what will happen.
“What you don’t see in the film is I called my older brother Greg and told him what the doctors said. He just replied: ‘Morgan, people eat this shit their whole lives. Do you really think it’s gonna kill you in nine more days?’ At the time I thought that was the most logical thing I’d heard, so I kept going.”

An instance where he couldn’t keep going but details of which did end up on film was his troubled libido, courtesy of his girlfriend’s honesty.

“Normally we have a very healthy sex life,” laughs Jamieson “but within days …”, clicks her fingers for emphasis, “immediately, no interest. It wasn’t happening.

“It’s funny because he wasn’t at any of the interviews I did, he wanted my real reaction. So I was on my couch in my pyjamas, with my glasses and no make-up, just talking to Scott [director of photography]. If I had known so many people were going to see it, I wouldn’t have talked about it.

“My father’s in denial: ‘that was an overdub, my daughter’s a virgin’. But my grandmother’s cool, she didn’t care.”

“The two girls who edited the movie, Stella and Bob, they just looked at me and said you can’t put that in the movie,” Spurlock chuckles. “But I thought every guy in America needs to see it! It was incredibly important for me to be as honest as possible. McDonald’s likes to say it’s just a shock movie, he’s just trying to shock you with the rectal exam and puking out of the window, his girlfriend talking about their sex life. But you know what? Life can be shocking and I thought that was something men needed to know.”

Despite his girlfriend’s macrobiotic detox plan, it took Spurlock three days of headaches to cope with his sugar withdrawl, three weeks for his sex drive to return and a further nine months to regain his original 185lb shape. He no longer exudes “McMusk” in the sauna and hasn’t eaten a McDonald’s burger since.

“Alex is so important in my life and she really opened my eyes to the importance of a healthy diet,” he admits. “The day after I finished, she cut out all the meat, all the dairy, all the sugar, all the caffeine. She’s a great cook and when she’s making vegan food, I’m all for it, because I’m getting at least one meal a day that is incredibly healthy.

A version of this interview originally appeared in the Scotsman, September 9, 2004.