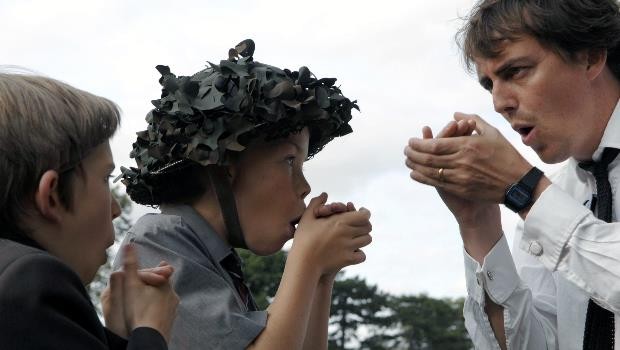 Sly’s seen it … lovely to get his blessing!

Mild motion-sickness isn’t perhaps the first thing you expect to feel in north London’s Holborn Studios. That’s until you realize that much of the office-space is actually located on converted barges, with a gently bobbing quay providing a walkway onto the snappily-named Eagle Wharf. This is the base of production company Hammer & Tongs, founded by director Garth Jennings and his producing partner Nick Goldsmith. Here Jennings awaits the press to discuss his second feature, Son of Rambow, along with his young stars Will Poulter and Bill Milner, and co-star Jessica Hynes (nee Stevenson). All are in good humour, as you’d expect given that the film has proved a hit on the festival circuit, and its long-awaited UK release is only a few weeks away.

Set in 1982, Jennings’ film tells the story of two ten-year-olds – the quiet and sheltered Will Proudfoot (Milner), and school troublemaker Lee Carter (Poulter) – whose discovery of Stallone’s classic action-thriller First Blood inspires them to shoot their own action-packed sequel. Jennings, dressed in casual jeans and T-shirt, reckons that his young stars are largely responsible for the film charming festival audiences and critics alike. “I think if people like the film, it’s normally because they like these two,” he smiles, “You know, you can do all the best writing and all that stuff in the world, but actually it’s very hard to find people of their age with that kind of confidence.” Lucky, then, that the boys showed up when they did, as the production team was coming to the end of a fruitless five-month casting period. “We had to sort of stop casting and start moving on with pre-production, and they were both – even though they’re in the room, I would say this anyway – exactly right for the parts,” says Jennings, adding, “It was one of those instant, easy-peasy decisions.”

While the boys snap up most of the attention, Hynes plays Mary, Will’s mother. As the Proudfoots are part of the strict Brethren religion, Mary has imposed a blanket ban on television and films, making Will’s accidental exposure to First Blood all the more potent. Hynes, perhaps still best known for cult TV favourite Spaced, which she co-wrote and starred in with Simon Pegg, describes her rare, non-comedic role in Son of Rambow as “a one-off”, adding, “To play a straight role in a film like this is a gift, I mean it’s a sort of career highlight, really.” Her enthusiasm for the role even extended to the costume, despite the Brethren’s conservative tastes: “I loved it!” she laughs, “It’s like Little House on the Prairie, with the button-up shirt.”

Jennings drew inspiration from his own childhood in writing the screenplay. “This was phenomenal!” he exclaims as he recalls his own discovery of the original Rambo. “We were playing in the forest everyday, and then here’s this guy with a knife and a stick who takes on two-hundred guys – he only kills one of them, and that’s by throwing a rock…” Even, however, after the success of his debut feature, The Hitchhiker’s Guide to the Galaxy, Jennings found the £3.5 million production-budget was still far from easy to secure for Son of Rambow, as it didn’t seem to track with industry expectations. “We weren’t making another loony space movie, or something with a robot,” he sighs, “No, seriously, people were saying, ‘Nice… but have you got anything with robots, or some puppets? Puppets would be great.’”

With the budget eventually secured, taking a step back in terms of production size was a relief for Jennings, who, having come from a background in music video production through Hammer & Tongs, found the big-budget studio experience to be sometimes cumbersome on Hitchhiker’s. “We [had] got to do it exactly as we wanted to, but we suddenly inherited all this studio stuff,” he explains, “We had a load of people, it means you’re a lot slower, it’s harder to get what you want, just the numbers… So it was rather nice to do Son of Rambow and go, right, you really don’t need all that stuff.” Cutting back on the studio fat meant Jennings could also pay more attention to his stars. Hynes describes how the production’s small scale helped preserve its charm: “They’ve solved problems with the film within their own sort of creative team, which has meant that it’s kept its heart.” As Jennings banters back and forth with Milner and Coulter in the Holborn Studios barge, they offer a glimpse of how much fun the shoot must’ve been. “It was an amazing thing for a director to have people who just, I mean when you say ‘Can you be dragged a hundred feet along the floor really fast by the kite there?’ (imitates the boys) ‘Yeah, cool,’” Jennings gushes.

The boys weren’t allowed to do their own stunt-work (“if something happened, that would be the end of everything,” Jennings grimaces), although Milner admits to a boyish rivalry with his co-star: “During filming we had like an ongoing competition who could do the most stunts, but they were always a bit petit!” Milner remains the only one of the two to have seen the original First Blood, strictly for research purposes of course. “It did help me, kind of, play my character a bit more,” he offers, thoughtfully. It turns out that Milner’s more into Spider-Man (“He’s a dangerous lad! And he goes to school! He’s doing his GCSEs, and he’s fighting crime at the same time!”), while Coulter’s cinematic inspiration is Ethan Hunt: “I remember when I was about ten years old coming out of Mission: Impossible and being generally convinced that I was a secret agent!”

Son of Rambow was originally scheduled for release last summer, but legal problems restricted it to the festival circuit instead. Jennings and Goldsmith had gone into production not knowing who owned the rights to First Blood (Son of Rambow uses clips of Stallone, and, of course, the correctly-spelt name), but discovered afterwards that, in Jennings’ words, “people own different parts of Rambo”, which complicated things. Jennings describes the production mentality, with a wide smile: “[We thought] we’ll just make it, and it’ll be good, and then they’ll see it and go, oh alright, and, er… that was unbelievably naïve.” Luckily, the legal issues have all now been sorted, and the film even has the seal of approval from Rambo himself, to Jennings’ obvious delight: “Sly’s seen it, and he gave me a very, very nice review, yes, he was very sweet. Lovely to get his blessing.” Lets hope Son of Rambow gets the box-office reception it so richly deserves.