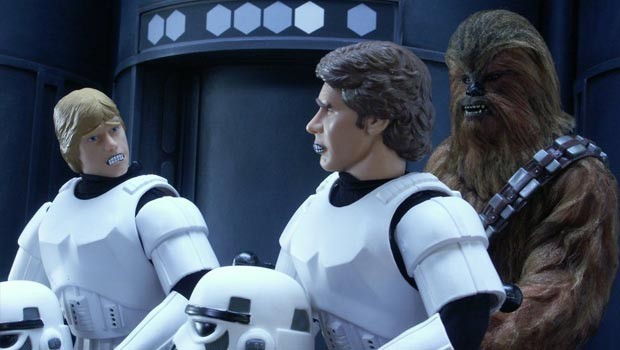 Seth Green and Matthew Senreich chat about there latest animation based around Star Wars.

Q: How have things changed for the second season of Robot Chicken?

Matthew Senreich: We now know what works after doing the first season. We realized that it’s a delicate balance between soft humor and our violent, physical comedy (which plays out really well using toys). And we have more time to make an episode. Last season, we only had five days in the animation cycle. This time, we have six. It makes a world of difference in the production value.

Seth Green: We have more time, but that doesn’t make the schedule more relaxed. Now, we have more time to devote to each individual aspect of the show, whereas last year we were doing so much at the same time that it felt really scattered. As a result, the production value is much higher. We learned from mistakes we made last year and have a really strong sense of what is and isn’t the show.

Q: Were you surprised with the immediate positive response that the show got? That it was a hit with both critics and fans?

Seth Green: We were surprised, because we kind of make this show for ourselves and make what we think is fun. It’s always nice to share a sense of humor with people and to feel like people get you. We were really pleased by the critical compliments, because you never know how people are going to respond to this type of humor, the all-over-the-place pop culture referential stuff. People gave us credit for being clever rather than highlighting when we were stupid.

Matthew Senreich: Our goal was to either get an A or an F in Entertainment Weekly. To be honest, we were beyond flattered and surprised to get the A. Like Seth said, we make this show for ourselves in a sense and do what makes us laugh. It’s a mentality that we think other people like us have. People liking it really makes us happy and feel like we’re not weirdos or something.

Q: Do you follow any of the criticism/praise online?
Seth Green: No

Matthew Senreich: I have to say that I started reading everything online every day – the reviews, the message boards. Now, I’ve slowed myself down and only check those out about once a week. I love the Adult Swim message boards, though. I’ll never write anything on there for fear of being crucified, but really enjoy reading what people have to say. The good, the bad and the ugly.

Q: Have you booked more celebrities this season?

Matthew Senreich: We do have more celebrities. We have booked everyone from the two Coreys to David Hasselhoff to Christian Slater to Hugh Hefner. Hulk Hogan, Wayne Brady, Rachel Leigh Cook again and so on. Random people that fit. Roddy Piper even! We find that a lot of people want to be on our show, not for the money, because we definitely don’t pay enough, but because they enjoy playing characters they’d never get to play otherwise.

Q: Did you find it easier to get celebrities to pitch in?

Seth Green: It’s easier now, because more people know the show. We’ve got examples from the entire first season to show people what it is rather than trying to explain it. We have a track record of cool celebrities who have come in and had great fun. That success gives us credibility when we are pitching agents and actors. It’s not some micro-budget thing made in a tiny garage, but a modest-budget show made in a midsized, incredibly professional garage.

Q: You poked fun at a lot of people in Season One. Did you hear from anyone?

Matthew Senreich: Most of the people we made fun of made fun of themselves in the first season, like Ryan Seacrest and Joey Fatone. David Hasselhoff, who we made fun of last year without him, came in this year to revel in making fun of himself. It was flattering to hear him say how much he liked our show. I mean, he’s Michael Knight!

Seth Green: A lot of celebrities come in to play themselves and poke fun at the way that they are publicly perceived.

Q: Being so busy, how do you stay tuned in to pop culture in order to make fun of it? Do you read the tabloids, watch a lot of TV, etc?

Seth Green: I keep my eyes and ears open. When you hear about something from enough people, you know it’s something to make fun of. Plus, we trust our instincts. If something strikes us as funny, we’ll talk about it.

Matthew Senreich: It’s less about staying in tune with pop culture than just knowing what you’ll still be talking about in a year. It’s hard to make fun of something topical, because it won’t be relevant later. If you do a Nick and Jessica joke, how do you know if they will be together once the episode comes out? Good thing we didn’t do one, since they aren’t together anymore. Between all the writers, we’re watching a handful of TV shows, still reading comics, collecting toys and hearing the tabloid stories. You just hear things. It’s the things you talk about with your friends. That makes our show.

Q: Do you ever worry about running out of things to skewer?
Seth Green: No. Look at the world we live in. Everyday a million people give us a million reasons to point and laugh or to question the seriousness with which they do whatever it is they are doing.

Matthew Senreich: We think of ourselves as a sketch comedy show. Half of the time, we are making fun of existing things, and the other half, we are producing original content. Our humping robot didn’t come from skewering anything in pop culture. Who would have thought that a robot humping a washing machine would make people laugh.

Q: Are there any skits or stars we’ll NEVER see on Robot Chicken?

Matthew Senreich: We have censored ourselves. There are only two things that have been cut that we’ve been told we can’t do.
Q: Have you ever had a skit or idea that you loved that no one else thought was funny?

A: Seth and Matthew: Every day.
Q: What are some of your favorite sketches in Season Two?

Seth Green: Our Scarlett nerd has an adventure with a unicorn. The Six Million Peso Man makes me happy. Corey Haim and Corey Feldman have a classic adventure, and we get to the bottom of the battle of the teen starlets.

Matthew Senreich:  Right now, I love the Dragonball Z sketch that ran in our Christmas Special. I’m a big fan of our Six Million Peso Man sketch also. Our parody of 8 Mile, which has an unlikely rap battle in it. And we haven’t filmed it yet, but I can’t wait to see our Beastmaster the Musical. And definitely our Corey Haim/Corey Feldman sketch.

Q: Talk about your production process. Start with how you generate ideas for skits and take us through the writing, animation, record and post-production.
Matthew Senreich:  It starts in a writers room with our head writers, Doug Goldstein and Tom Root, Seth and myself leading the room with writer Mike Fasolo and a rotating staff of two other writers. Everyone throws ideas out, no matter how absurd or stupid. 99% get rejected, but with the ones that land, we tell the person who generated it to take it to script. Once in script phase, everyone in the room will polish it until it’s perfected.

Once a script is finished, it goes through a lengthy approval process of lawyers, the network, etc. Then we cast the parts. We can only afford to have an actor do about 3 voices per episode and a total of 5-8 actors per episode. Every other voice is Seth. At the same time, storyboards are being done so that we can marry the voices to the storyboards in an animatic. Then, the sets and puppets are built before going to the animation stages where everything has to be lit properly. From there, it goes to our editing room. Music is added, then sound. That’s the quick version. It takes a month to make one episode, and we work on about six episodes at a time.

Q: Has the process changed at all from last season?
Seth Green: We have more people working on it this season, and the process is a little more oiled. We have a better idea of what we are doing, so there’s less guesswork.

Matthew Senreich:  As I mentioned, we built in an extra day into our production cycle, so everything looks better.
Q: Did the move to a new production facility change things?

Matthew Senreich: Our new facility gives us more space to store all the monster sized sets we build. Our old studio felt like we were 75 mice trapped in a box. Now, we have a bigger cage to play in.

Q: Did you ever think that your obsession with toys would lead to this?
Seth Green: I told my parents and all my teachers it would, they just didn’t believe me.

Matthew Senreich: I never thought toys would lead to this interview.