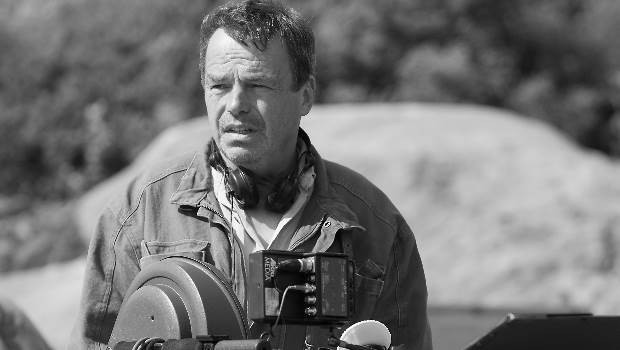 One of the finest filmmakers to come out of Ireland, novelist, writer and director Neil Jordan made his name with such films as A Company of Wolves and Mona Lisa. In Hollywood he made We’re No Angels, and the sleeper success The Crying Game which earned him the Best Original Screenplay Oscar. From there he made Interview With The Vampire and Michael Collins made. Recent credits include The Butcher Boy, In Dreams, The End of the Affair and The Good Thief.

Reuniting with The Butcher Boy author Pat McCabe for Breakfast On Pluto he tells the story of Patrick ‘Kitten’ Braden (Cillian Murphy) a young Irishman whose flamboyant ways – not the least of which is his taste for cross-dressing – prove out of step with his staid Irish community. Abandoned at birth, he resolves to find his natural mother – whom he has idealised into 50s starlet Mitzi Gaynor – when he is old enough. Setting off for London in the early 1970s, with the troubles at their height, Kitten has only one thing on his mind.

Breakfast On Pluto has been a long time in the making, has it been difficult to get interest in the film?

Neil Jordan: “It didn’t turn out to be in the end. I was writing a novel about three or four years ago, I’d finished the script and tested Cillian. I wanted to find out if somebody could play the part so I tested a group of young Irish actors, and Cillian was amazing. Ever since then he’s been asking me when we were going to do this film. Then I produced Intermission which he was in, and eventually he just said ‘please do the movie before I’m too old for the part’. But I was kind of worried about returning to the issue of political violence again, because you get into so much trouble when you do that.”

Neil Jordan: “Eventually the time seemed right, I got rid of my reservations, and it probably helped that the conflict genuinely seems to be over now.”

Did the experience of being an Irishman in London at the time hold many personal echoes for you?

Neil Jordan: “Oh yes, it’s very close to that, not that I’m a cross dresser or gay though. But I could identify with this wonderful urge to drape colour across the bleak Irish landscape. The first time I came to London it was probably 1970 or 1971. A group of us were going to move here, and I came in advance with a lot of money to buy a flat to set us all up. The money vanished very quickly, so I ended up being homeless actually. I got a job wearing a sandwich board advertising flats. It was very strange. I was a bit like the character, drifting. I think every Irish kid has that experience in some way, I know I did definitely.”

Neil Jordan: “No, I actually liked it because I found it far more welcoming than Ireland was. You have to understand that at the time, even if you were going to the Labour Exchange and were drawing the dole, there were signs up everywhere explaining your rights to you. There was a clothing allowance, I couldn’t believe that, that you could go off and get a suit because you had to go and get a job. If you got sick you went into the hospital on the National Health. I couldn’t believe it.”

Cillian not only delivers a great performance in the lead but he turns out to cut a very fetching figure as a female too, doesn’t he?

Neil Jordan: “I didn’t think it mattered how attractive he was, because the character wasn’t trying to be a girl. He wasn’t pretending to be a girl. He’s vain enough to want to be pretty, he wanted to be Margaret Thatcher, which every transvestites wanted to be at the time, as far as I remember. He wasn’t trying to fool anybody. It was far more important to me that he came at the character from the inside and got the emotional heart of the character correct. That was more important than all the accessories, all of the frills and costumes and things like that.”

If you’d cast him four or five years ago would he have been as good as he is now?

Neil Jordan: “I think he would have, absolutely. He would have been able to do it then as now. It was just my prevarication that made him wait. I think he is an extraordinary actor, and he approaches the parts with that physical immediacy that people like De Niro and Tim Roth, Daniel Day Lewis or Edward Norton do. He does go through this transformation which is extraordinary. And he has these extraordinary blue eyes. He doesn’t blink.”

There’s a fleeting supporting performance from 70s rocker Bryan Ferry too. What made you cast him?

Neil Jordan: “I had to cast a suave Englishman for a very small role. I suppose I could have gone for a well known actor. Ralph Fiennes did two days for me on The Good Thief, he was the art dealer, and he played it beautifully. I think it was because the film was so much about music and I was listening to so much music of the period that I just thought of Bryan. I didn’t know him, but he seemed to be acting in his performances back then, with the white suit and the elegant image. He’d never actually acted, but he came over and did a little rehearsal and was very good. It just took an evening to shoot his scene really.”

Another blast from the past comes with the inclusion of The Wombles in the film. Were there any problems getting rights to use them in such a dark, edgy movie?

Neil Jordan: “No there wasn’t a problem with that. What did cause a problem was the Rodgers & Hammerstein estate, because at one point I was going to use music South Pacific. If anybody knows Mitzi Gaynor that’s where they’d know her from. But they read the script and said there was no way I was using any references to their great musical in our film. I was actually kind of glad in the end because Les Girls is a far more culty kind of thing actually.”

Considering the film picks it’s way through Northern Ireland’s recent, troubled past it is very even handed, which was totally conscious wasn’t it?

Neil Jordan: “I hope it’s not partisan at all. We haven’t seen that before, we’ve always been asked to the poor oppressed Irish minority, kind of thing. That was part of the reason I wanted to make the movie, because the character of Kitten is so unusual really, his innocence was his defining quality.”

Kitten is innocent, but he ends up working in a peep show with a kind of strippers’ co-operative – is this an extension of his fantasy life do you think?

Neil Jordan: “There was such a place as that in Soho. When I was doing Mona Lisa I had to go round all these clubs, because we shot in them. What we saw then was the Soho that everybody remembers. And I did come across a peepshow that was run by a co-operative of women, absolutely. It was designed to keep the girls safe from disease and addiction, and safe from pimps. They ran it themselves, it was wonderful. It was an erotic wonderland really, they used to sit on this extravagantly dressed swing, kind of like you see it in the film. I recreated it totally, that place did exist.”