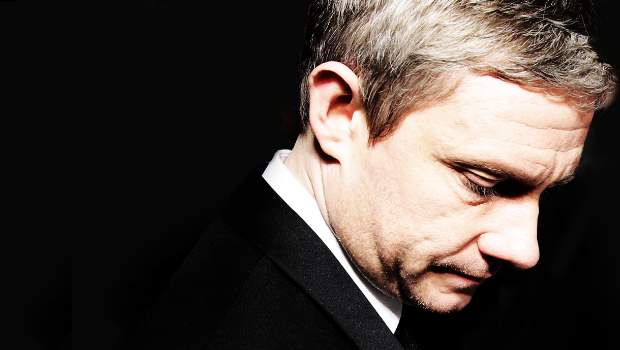 Nativity! is a comedy from the mind of Debbie Isitt, made using a similar improvisational style, and some of the same cast members, as her previous film, the mock documentary Confetti. As the title suggests, this one has a festive theme, specifically focusing on a Christmas-hating primary school teacher played by Martin Freeman, who is tasked with turning around his school’s reputation for poor Christmas shows and putting on a spectacular Nativity. Freeman is no stranger to the world of improv comedy, having made his name in hit BBC series The Office, and worked previously with Isitt as one of Confetti’s ensemble cast. We spoke to him about the challenges of working with children, his thoughts on primary school teachers and the enduring appeal of the Nativity story…

It’s interesting that there’s no screenplay credit for this film. How does it work – does Debbie explain what she wants or is it all completely improvised?
Yeah she does explain. This, probably more so than Confetti, was more explained and locked down. In Confetti, in the course of a scene if characters decided to take it in any direction, that’s where the scene and the story went, within reason. But with this it was more “you have to get from A to Z, saying this, we need to plot that, and at some point someone needs to say that”. Debbie likes the uncertainty, and I think she has enough respect for actors, as good a screenwriter as she is, and she likes to let unexpected things happen that may be, hopefully, better than what she would have had in mind.

So, is Nativity a British answer to the High School Musical phenomenon?
Well, it’s a fair question because there is an obvious comparison to be made there, but I think, with these children, it is a bit more accessible. It is a bit more – for want of a better word, in a film that’s got bloody live camels in a nativity play – real. Okay, it’s not Ken Loach, but you do see kids messing up, you do see kids failing. They haven’t all arrived like mini stars, you see the real experience of it being good or bad or whatever it is. You see the real charm.

How was it trying to hold your own against so many little scene-stealers?
I’m more than happy to have scenes stolen by them, because after all, whatever makes the film right, you know? And Debbie was adamant from the outset that not only did she want a child-friendly film, but she wanted very much a film that all the family could see, including young ones. As far as I’m concerned, the star of the film is the children, that group, and that’s the real overriding thing that you come away with. So fortunately in this case I was very happy to be gazumped.

Did making the film give you a newfound respect for primary teachers?
I’ve always had a great respect for anyone who wants to get in a room with thirty-odd children, and not kill them. It gave me more of an idea of how difficult it would be, certainly, but no, I’ve always had concrete respect for them. I don’t think I have the patience to be a primary school teacher. All the stuff at the start of the film where my character is not in love with the world and he’s grumpy; that wasn’t all acting. That was verité. And I’m a dad in real life, so I also drew a lot on my own experience as a dad to get those high-pitched shouts!

Did you put on an actual nativity play?
Yeah, we had to rehearse a lot more than you see in the finished film. We were there for hours and hours going through the choreography and the songs and everything. It was testing., and I definitely drew on my own abilities, or otherwise, to corral children. But I haven’t got thirty children; I’ve got less than that! So there’d be times when I’d be trying to appeal to the older ones, to sort of set a good example, which worked sometimes. And other times they would do what children are supposed to do, kind of arse about a bit.

As a parent, have you had many painful experiences watching awful school plays?
I do genuinely think there’s something about watching children doing almost anything that is forgivable, no matter how terrible or otherwise it should be. There’s something about the innocence of children trying their best, and not being that knowing, that’s quite charming really. It is one of the things that I really love about this film; it reminds you of watching your own children do stuff. And yes, normally there aren’t real camels at the Christmas play, but I think it still holds true, there is something undeniably emotional about watching children, your own especially, but any children I think. There’ll be a lot of people in bits as soon as this film starts. I was when I saw it, because it’s real; it’s not kids pretending to be kids, they’re really there trying their best, and however that turns out I find it very moving.

Would you encourage your own children into acting?
I wouldn’t actively encourage or discourage them from this life. Both me and my other half are actors and, while of course there are hard bits to it, it’s a good life and I’m thankful to it every day. But I think if you’re the children of actors you don’t need encouragement – you’ve got a bit of it in you. So I’m just gonna see where that goes with mine.

Would you consider following your Nativity co-star Ashley Jensen and moving to the US to work?
It’s interesting, Debbie definitely wanted someone for that role that looked, to a British audience, like they had ‘crossed over’ to America. So she wanted that parallel to be drawn with Ashley, quite clearly. Personally, I would crawl over broken glass to work on something good, wherever, but I never wanted to go over to the States and just wait around for work. As any actor will tell you, you can stay here and do that! I’ve worked in the States a couple of times, but I’ve got a family, and I have a responsibility I think, to not necessarily do that to them. You know, whatever you want out of LA, your family might not want that too.

What do you think is the continual appeal for retelling the Nativity story?
I think it’s a great tradition, and it’s great that it carries on. I really do think it’s the greatest story ever told, and this is just the first bit! I am a sucker for the whole story, and I’ll hear it any which way, because I’m endlessly fascinated by the myth and the truth, and every part of it. It’s a really, really good story, and I think that there are great truths in it: that great things happen to the smallest, tiniest person, and the least likely child or person ends up elevated to the highest status. If that’s not a great parable, or way to think about life, then I don’t know what is.