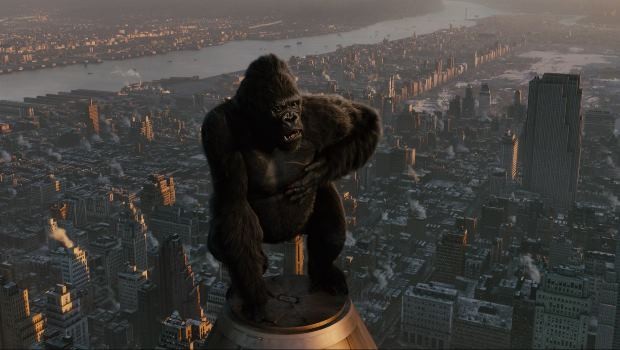 Kong: Could it be the hype that kills the beast?

When you think of a fat, hairy primate, arriving in America from the other side of the world and causing havoc, there’s two names that come to mind: Peter Jackson and King Kong. And on that cue let me be the one of the first to air my thoughts on these two bare footed cinematic icons.

Yes – I was one of the millions who were looking forward to the two-minute or so teaser trailer aired on all American networks and numerous websites a few weeks back. No – I’m not the nerdy, chat room type of bloke who has been logging on daily to the website kongisking.net with it’s weekly video diaries and leaving comments on IMDB’s message boards. For the most hyped film in cinematic history (the marketing meant the trailer was premiered to over 100million viewers of USA TV alone, Jackson has made a record in getting $20 million plus 10% of gross with his writing team and the budget is just over $200 million (production + marketing). But these facts illustrate the size of the balloon being inflated and the potential prick, however small, that could burst it.

Universal is staking its arse on this film. The last two times it pushed the boat like this, the boat never really came back, in fact it leaked and plunged to the depths of crustacean that had never seen sunlight (remember Heaven’s Gate and Ishtar? No I didn’t think you would, try ‘Van Helsing’!!). Jackson was the same talented writer / producer / director who had made a series of cheap films like ‘Bad Taste’ and ‘Heavenly Creatures’ and finished his first foray into Hollywood with ‘The Frighteners’ and presented the studio with his newly gleaned scripted ‘King Kong’, they told him to f*** off, but stick around… He then put the script back in the drawer. But they said ‘pitch any ideas to New Line’, a smaller company.

Jackson then went back to New Zealand, wrote a script, assembled his team, made a significant corporate presentation, complete with trailers and schematics, an attractive budget due to shooting down under and CGI, came back and pitched a very convincing business offer to New Line (He’d actually pitched for two films, but the bosses were impressed enough to encourage the full three). And numerous Oscars, even more nominations, a couple of billion in the bank and not to mention law suits over DVD royalties and now New Zealand as the new secret hideaway no one knew about, the rest as they say is history…

But history is the reason I am writing this piece. I saw the teaser and I was not impressed. I love Jackson, his films, and what he’s done for the complex medium known as movies. But I’m worried that his most anticipated next step will have him fall on its backside.

The reviews and coverage for the first trailer have been unanimous in saying ‘Yes.. Yes baby.. Oh Yes!!’ in short this December the predictions are we will be celebrating the birth of a baby who will change mankind, and in this instance – his name is not Jesus. But with so much hype, expectation and anticipation follows caution, speculation and well wishers, I am one of them but with a different slant.

There are 3 reasons for my pessimism:

The initial trailer was truly, significantly, hugely anticipated but didn’t really give us anything exceptional to look forward to – leaving us utterly underwhelmed. We know the story, we know the stars, we know the makers and we expect the best. But no lingering image. What happened to the art of anticipation? Sustaining the element of surprise?? We like being teased, and to some extent are feeling cheated without the foreplay this big cinematic event so deserves, so promised…

Maybe we’ve all become increasingly numb in this competitive world of ever evolving computer-aided cinema. Troy was a victim of the fact it used CGI to make it look so epic, that the CGI savvy audience felt patronized. But back to the trailer. The Matrix trailer sticks out with leather clad Trinity dodging bullets by running up the wall, Independence Day trailer whetted my appetite on seeing the white house and New York getting blown up to high heaven, very realistically, the Jurassic Park teasers with dinosaurs that were light years ahead of any Doug McClure film urged me to my nearest UGI, Titanic, when the people were hanging off the railings as the ship plunged straight down into the icy waters of the Atlantic devastated me to take a serious peek, even the Hulk delivered us a stunning site of the green monster swinging an American army tank being swung by its artillery barrel.

Kong? CGI to recreate awe inspiring historic landscape and terrain? See Troy, see Gladiator, and see Lord Of The Rings! Bringing back pre-historic animals to devastating life? See Jurassic Park 1 – 2, BBC and National Geographic documentaries. A CGI central character? See ET, see Hulk, see Mighty Joe Young, See Congo, see Godzilla!! Even the question ‘What would be the new look of Kong?’ wasn’t much of a revelation, as he was going to be the same looking thing that was the ape in all the ape movies in the last two decades give or take a couple of metres and a few giga-pixels. The point being technology has forwarded the sophistication of the animal’s details, not drastically changed it (Think revolutionary step of Donkey’s added hairs on his bald patch in Shrek II as opposed to Shrek). With Godzilla we were all looking forward to seeing the new CGI animal after being so familiar with a Japanese stuntman in a rubber suit.

King Kong is very much part of 20th century popular culture but it doesn’t have the same ongoing above or below the line cult ‘following’ as comic book heroes or Manga characters or video games (think Spiderman, Akira or Tekken). Kong is an important relative we meet at family functions and admire but never socialize with (Think Sherlock Holmes, Godzilla, Frankenstein, Hamlet, Huckleberry Finn) a legend as it were. Star Wars has a cult following, as does Batman.

Star Wars was born on celluloid but has sprouted a loyal following that laps up spin off TV programmes, animated series, conventions and talking toys. Batman jumped out of the regular pages of post depression era comics, to a TV series, and to numerous interpretations (Frank Miller’s ‘The Dark Knight’, Tim Burton’s two offerings). In short they are franchises and people have an affinity with the central character and want to see what they do next. Think Spidey, Superman, Ewoks and even the Young Indiana Jones. So the only cult following is that of Peter Jackson. But then what about the success of ‘The Lord of the Rings’? Legend? Literary stalwart? Etc. Well there was never this anticipation. It was a surprise, and a good surprise. If it wasn’t it would be brushed under the carpet with the rest of the fantasy crap in the last ten years like the ‘Dungeons and Dragons’ with Jeremy Irons and Channel 4’s ‘Dinotopia’

The history of American cinema is littered with fables of stars or star directors pushing the boundaries of financial and commercial reasoning and expectations. Think ‘Gone With The Wind’, ‘Cleopatra’, ‘Heaven’s Gate’, ‘Waterworld’, ‘Terminator 2’, ‘Titanic’ ‘Troy’. These films fall into two categories, apart from the obvious $150million+ budget (taking into account inflation), they are all huge flops or huge successes. Hence very binary, one or zero.

More column inches than the reported seven metres something of the ape will be written in prelude to the film’s opening ‘Fall 2005’. This will be THE film of the year, even the Academy will be on alert after having given a few dozen of it’s statuettes to it’s antipodean, shoe weary writer / director / producer in the last few years. And with that much focus, the jury will come in very, very soon.

Let’s hope this is not Cimino’s ‘Heaven’s Gate’, Costner’s ‘Waterworld’, Lucas’s ‘Howard the Duck’ or even Spielberg’s ‘1941’. But with the first glimpse of the trailer, there’s a lot of work to be done in the next six months Mr. Jackson. I hope Jackson doesn’t go the way of Ang Lee or Roland Emmerich. He is a unique film maker who understands all the commercial and creative aspects of the complex medium known as film; he writes, produces, directs, owns a production house, has amassed critical respect as well as currying favour with the Executive studio vultures. He realizes the importance of pre-production perfection in the script as well as the complementation of special effects in the post-production. Ang Lee will probably not touch another ‘Hulk’ and continue doing small films about gay cowboys or the outsider’s view on American culture. Emmerich gets a big budget when he does something similar to ‘Independence Day’ (like The Day After Tomorrow) and James Cameron has been so shit-scared he’s not written or directed any movies for the last 8 years.

To use a line in the finale from the original King Kong; “It wasn’t the airplanes, but ‘not coming upto expectations’ that killed the beast.” Let’s hope Jackson doesn’t mirror the film’s own Carl Denham in losing control of this gargantuan beast. In turn leaving behind an unappreciated, unloved and misunderstood endeavour, much like Kong himself.

The article was written a few months back based on the teaser trailer… Raam insists the movie is still “..too arse-numbingly long..”