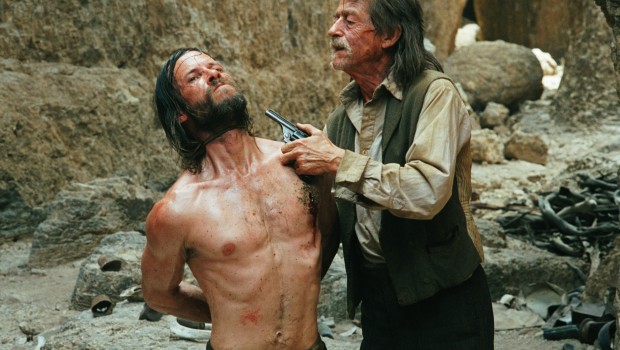 John Hillcoat baulks when asked to describe his latest film, The Proposition, in the style of a trailer voice-over. He looks momentarily stunned, his eyes roll back and he says: “Er… no. I can’t do that.” He’s probably right; The Proposition is a film that takes itself too seriously for the intrusions of a cheesy Hollywood voice-over. Screen titles, sombre music rising with dramatic importance and a series of fades to white would be more its style.

The film centres around Irish outlaw, Charlie Burns (Guy Pearce) and a proposition he receives from Captain Stanley (Ray Winstone). He must hunt and kill his psychopathic older sibling Arthur (Danny Huston) or else his innocent younger brother, Mike (Richard Wilson), will be hung on Christmas day.

As the plot suggests, The Proposition is essentially a Western. What makes it different is that it’s set in the frontier of 1880s Australia. It shares the spirit of the revisionist Westerns of the 1970s; like Leone’s Once Upon a Time in the West and Peckinpah’s Pat Garret and Billy the Kid a central theme is the conflict between civilisation and lawlessness that arises during the formation of a nation. “It’s about Empire building,” says Hillcoat, “about how a dominant country forcing its culture and ideals upon another culture is a recipe for extreme conflict. I mean, I don’t personally believe in the notion of civilisation and lawlessness because if you put your feet in the shoes of the other side, they would see that they’re civilised and what’s coming in is uncivilised… the barbarian invaders. You know, one man’s terrorist is another man’s freedom fighter.”

As Arthur Penn did with the Native Americans in Little Big Man, Hillcoat addresses the treatment of the Aboriginal people in The Proposition, an issue that remains highly controversial in Australia today. “It’s a very hot topic,” he says. “About two years ago there were more people on the streets about it than ever before in Australian history in terms of protest. There were a lot of anti-Iraq protests but the Aboriginal issue was and remains the biggest issue in Australian politics. And bizarrely the Australian government denies that this is going on and makes matters worse by failing to acknowledge it or drawing up some kind of apology. Like the rest of the world it’s like we’re going backwards; it’s like the 1950s. Some historians are saying that there weren’t any massacres when there’s very hard, solid evidence that they did actually happen. So it’s all very reactionary.”

The film was written by cult rock star Nick Cave and marks the latest in a line of collaborations. “Nick and I met in the early 80s in Melbourne,” says Hillcoat. “I was kind of caught up in the music scene and the music scene, film and arts were all sort of mixed up together. It was the post-punk period and I did some short films that Nick noticed and we had a lot of mutual friends. But it wasn’t until my first film, Ghosts of the Civil Dead, that we actually worked together on something. We just clicked and I mentioned this idea, way back then, of an Australian Western but I knew it was too ambitious for me to jump into. So I kind of put it on ice but spoke to Nick about doing the soundtrack, which he was very keen on doing, because he did the soundtrack on my first two films and I’d been working on a lot of music videos with him. I was trying to find a story to hang this wide canvas on and Nick was getting a bit fed up because it was getting on to nearly 20 years since we’d been talking about it. So I asked him to try writing a story and then we’d get a professional screenwriter in. But once he started writing that was it. It just poured out.”

Despite being new to writing screenplays, Cave appears to have found the experience relatively easy, claiming to have finished it in just three weeks. “He only did one rewrite,” says Hillcoat. “And the finished film is very faithful to the script, it didn’t change that much.”

Things got considerably tougher when it came to actually shooting the film, due to the conditions of the Australian outback which included temperatures stretching into the high 50s and plagues of flies. “It was very brutal,” says Hillcoat. “It got unbearable for everyone and the equipment got so hot you couldn’t touch it so we had to go into night shoots, and even then it was in the high 30s.” Despite the extreme heat, only one individual of the 190 cast and crew passed out. “That,” Hillcoat opinions, “was very much down to his own fault. He wasn’t drinking enough, he was overweight, he was old… he was actually being quite stupid.”

By some co-incidence the location of The Proposition is the same as a 1904 Australian Western called Bushranging in North Queensland. Although unaware of this when selecting the town of Winton, Hillcoat sees his film as the reclaiming of an Australian genre long outcast and forgotten. “It’s kind of gone full circle,” he says, “because the Australian bushranging films predated the American Western. But then they were outlawed by the Victorians and by outlawing that genre – it was full on film censorship – it took the wind out of the whole birth of Australian cinema and the American Western took over. It would have been very interesting if it had continued. So this is kind of like a return of what possibly could have happened.”

Nick Cave and John Hillcoat Interview in “The Proposition”