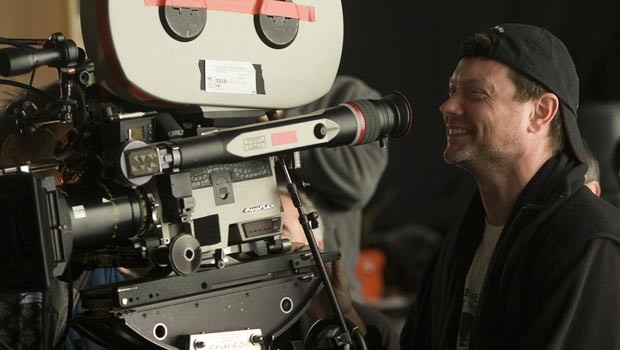 Screenwriter-turned-director George Nolfi has provided the scripts for mega blockbusters The Bourne Ultimatum and Ocean’s Twelve, but for his debut calling the shots he took on a more thought-provoking project. The Adjustment Bureau sees him re-team with Matt Damon as David Norris, a Senator-elect who keeps finding mysterious circumstances preventing him from meeting up with the beautiful ballet dancer Elise (Emily Blunt) who he thinks is the only one for him. Based on a Philip K. Dick novel it isn’t long before things get a little twisted for Norris as men in shadows threaten him with talk of having to follow a path they have set for him rather than his own desires but it’s not long before Norris is doing all he can to win the girl of his dreams. I caught up with Nolfi to find out how The Adjustment Bureau came about and what it meant for him.

“My producing partner Michael Hackett pitched it as the idea of fate personified”, he explained, “I thought it would make an amazing, interesting film.” The original story is just 10 pages so Nolfi had to elaborate on the source material to make it into a full-length feature and he felt adding a strong love story into the mix was the best way to do that. Nolfi said: “Dick’s story was a 10-page short story. The characters different and there’s no love story. The original concept for The Adjustment Bureau was to have the love story and we built it from the ground up, making every decision from an early standpoint and following my instinct.”

That instinct takes in a sly swipe at the American political roundabout, his own ideas about fate and the novel twist of men in grey suits and hats being able to walk through any door to almost any place in the world but keeping everything within clearly defined boundaries. Nolfi said: “For me, the touchstone was realism and using the extremes of the idea behind the movie handled in a realistic way. There are no magic powers, and the men in suits rarely use the powers they do have.” Those men included Terence Stamp as hardliner Thompson who will stop at nothing to prevent Norris and Elise from being together, including ruining their lives. He said: “Terence was fantastic, it was a pleasure to please to work with him. He nails things on the first take. He just figures it out and goes and does it.” He added: “His character goes through a transformation and realises he has things to learn. He’s not so high up and as strong and arrogant as he is, he still steps back. The reaction seen in the film was Terence’s.”

While Stamp put in a fine performance, it was Damon who had the most faith in The Adjustment Bureau, joining the project at the outline stages but it would take nine years to flesh out the movie into a shooting script. Nolfi said: “Matt came in early on – it was a short story for nine years as I was too busy to do anything except thank about it and jot notes down. In the end I had 200 pages of ideas by the time I wrote the script. I imagined a lot in those years.” He added: “I took it to Matt, but it was a bit different from what he normally does. We reworked his character and got a green light and Emily came in towards the end, she was the perfect match for Matt.”

While Damon had starred in a Nolfi-penned film before, The Adjustment Bureau was Nolfi’s first attempt at directing. He said: “It was a wonderful challenge. I got support from Matt, but that’s not always the case with first time directors. I’ve spent a lot of time on sets with the actors I’ve worked with, some every day. On set for Ocean’s Twelve there was a lot of stars and I talked to all the crew at length. I asked Steven [Soderburgh] a lot of questions and he explained why he made decisions. It snapped into focus the visual way you direct and I wanted to echo his style.” That style included impressive visual effects involving the Yankees stadium and Statue of Liberty. However, for Nolfi the overriding message of The Adjustment Bureau is the most important element. He said: “I believe our lives are shaped by wider forces and the choices in life define who we are. We need to be determined to make meaningful choices in life. We’re self-asserting beings who need to stand up to obstacles and decide who to be with ourselves.”