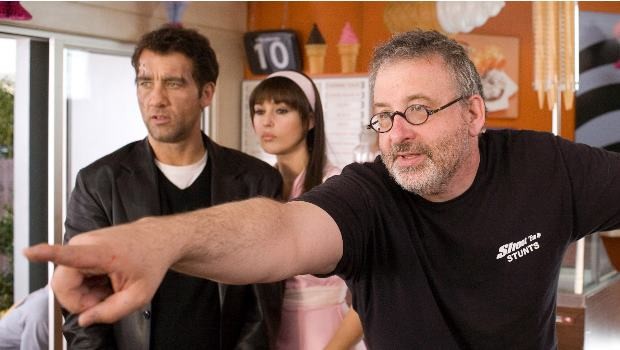 Michael Davis’ Shoot ‘Em Up (out on DVD in January) demonstrates a more progressive side of the relationship between video-games and cinema. With companies such as Sony, Microsoft and Nintendo competing fiercely for market-supremacy, the pressure for new, more advanced technology has never been more intense. Games have evolved to become cinematic, incorporating fully developed narratives and characters, and embracing new technology to produce lush visuals and often breathtaking – sometimes photo-realistic – gaming environments. Hollywood has been quick to spot the commercial potential of transferring cinematic games to the big-screen, and although an endless influx of film adaptations have found cinema audiences (from Tomb Raider and Resident Evil, through to Silent Hill and Doom), none have managed to win over critics.

Whereas films that take a game’s narrative substance and try to make it work on the big-screen have never been memorable for the right reasons, the results can be stunning when cinema takes inspiration from gaming style. The most successful cinematic example can be found with The Matrix films, a series of visually-spectacular set-pieces glued together with stylishly-photographed exposition. The films are most famous for their groundbreaking ‘bullet-time’ sequences, which are themselves rooted in modern gaming environments via the Japanese anime that was a direct inspiration for the Wachowski Brothers. Indeed, the very concept of the matrix is an artificial environment where characters can do pretty much anything, so long as they have faith, and commit to an ability to bend the rules of the physical world. Video-gamers were enjoying a primitive version of the same idea when Nintendo first gave us the Super Mario Brothers.

Shoot ‘Em Up takes its very name from the gaming genre which is now effectively redundant owing to the rapid technical progression of the gaming world. Recalling a more basic gaming age of the mid-nineties when titles were effectively defined by genre, Shoot ‘Em Up is an hilariously tongue-in-cheek action film. Rather than taking an existing gaming narrative as inspiration, writer-director Michael Davis focuses on the style of the shoot ’em up gaming genre, and sets about delivering a thrill-ride that sells itself as a product breaking new ground in action cinema. With a winking glee it propels itself from set-piece to set-piece, each more ludicrous than the one before. The bones of a story can be found in the hail of bullets. Clive Owen’s rugged protagonist, appropriately for the genre known only as ‘Mr Smith’, delivers a baby in an opening gunfight and then spends 100-odd minutes defending it from Paul Giamatti’s army of intentionally anonymous goons. But the story matters only as much as it does during the average game of Time Crisis. Moments of narrative exposition feel like the animated between-level sequences from the above arcade classic or more recent gaming entries like Grand Theft Auto; merely brief pauses to catch the breath before moving on to the next level.

The cast undoubtedly makes the trip more enjoyable, and enticed by the promise of an end result a little different from the norm, the experience is elevated above what could have easily become a straight-to-DVD affair. Owen is on fine brooding form as the charismatic man of mystery with an appetite for carrots, whereas Paul Giamatti lends further weight to proceedings as a former Bureau profiler for whom the assassination of the infant is the only obstacle to getting home for his son’s birthday. Monica Belluci provides a few distractions, but ultimately it’s the set-pieces that grab the attention. As Giamatti’s antagonist murmurs excitedly, moments before a(nother) bloodbath: “Violence is one of the most fun things to watch.”

With Resident Evil: Extinction topping the US box-office charts in its opening weekend, and Hitman having followed hot on its heels, it seems almost inevitable that a mainstream Hollywood ever wary of risk-taking, will provide more of the same over the coming years. Similar to the culture of remakes (think The Departed, King Kong, War of the Worlds and most Japanese horror films of the past five years), games come with a built-in fan-base and can be re-imagined for the big-screen with comparatively little effort. The gaming industry now rivals Hollywood in terms of sheer scale and market-value, with game releases enjoying unprecedented hype (just look at the release of the massively anticipated Halo 3, the latest weapon in Microsoft’s bid for gaming supremacy), while promoted with movie-trailer cinema publicity and public launches little different to red-carpet film premieres. In the meantime, the distinction between film and game becomes ever more blurred.

In a curious twist, although most mainstream kids’ films come with a video-game as a standard marketing tool, classic adult films such as Reservoir Dogs, The Godfather, Scarface and Hard Boiled, are also getting their own video-game adaptations. Perhaps the intention is to cash-in on the interactive nature of the gaming environment, something which makes Resident Evil work on the console, but a lack of which leads to big-screen disaster. Giving film fans the opportunity to interact with characters in their favourite crime-thrillers is a potentially lucrative idea. In the meantime, cinema-goers will have to make do with a Hollywood generally more interested in ripping-off the gaming industry, than taking inspiration from it.