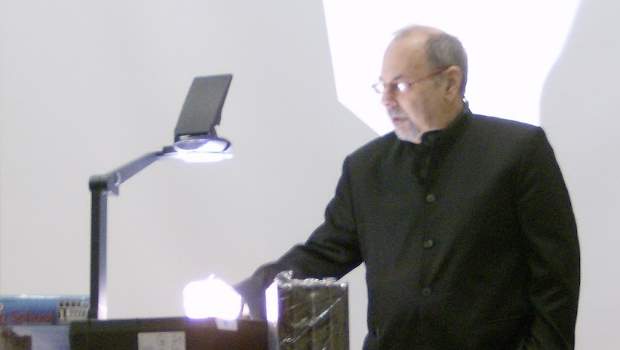 Attempting to break into the movie business is a little like having sex for the first time. You know you want to do it, you’re fairly certain millions of people are attempting to do it as well, and you’re damn sure there are some undeserving buggers who have done it already. But as you’ve never done it before, you don’t know where to begin, or what to carry on doing once you’ve started.

If you are lucky enough, however, the person (or if you are really lucky, the people) you are doing it with will ‘really know their onions’, and using their wisdom and experience, will guide you to the realisation of your ultimate goal.

If you are a movie virgin, and you desperately want to pop your cinematic cherry, but you don’t have the time or money to enrol in a £8,000 five-year-long film course, Raindance Training has the answer for you, in the guise of one Dov S-S Simens. A veritable guru in the Karma Sutra of moviemaking, Dov is the perfect partner to take you by the hand and in a whirlwind two days, teach you everything you ever needed to know about the business of making movies.

Dov is internationally recognised as the world’s leading independent filmmaking instructor, and he is back to London for his acclaimed Two-Day Hollywood Film School (running this year from 29th-30th November). In a no-nonsense, straight-talking style, Dov will break through the bullshit mystique of Hollywood and teach the business behind a successful movie – from producing, directing and shooting to marketing, financing and distributing it. The course will break down each process into the simplest terms as Dov imparts his 15 years of hands-on experience in the independent film industry.

And if you’re not convinced that two days are enough to learn how to make movies, perhaps the fact that Quentin Tarantino has been quoted as saying, ‘After the Two-Day Film School, I immediately launched my directing career with Reservoir Dogs’ will put your mind at rest.

Dov has been kind enough to take a break from his hectic pre-masterclass schedule to answer a few questions for Future Movies, about his course, filmmaking in general, and his most important tip to all those hoping to make it big in the movies.

Future Movies: Is there a set of rules or guidelines that underpin your approach to teaching?

FM: What kind of person will get the most from your seminars?

DS: First, professionals love the seminar for in two days they vicariously and step-by-step write the cheques and make a feature film and, without the chaos that surrounds them, learn how to manufacture movies more efficiently. Second, amateurs love the seminar for they learn the actual mechanical nuts-and-bolts steps to making their first feature film. Third, Actors and Writers love the course for they now understand what a producer and a director truly does and if they want to take control of their career then they now know what to do to Produce their script or Direct their acting career.

FM: What do you think are the essential differences between the people who attend your seminars in the US, and those who attend in the UK?

FM: What’s the biggest hurdle a fledgling filmmaker will face in the early stages of his/her career and what advice would you offer to help them overcome it?

DS: The single biggest problem for first-timers who never become a first-timer and first-timers who never become a second-timer is that they do not know what a story truly is. Wannabes always have naïve unfleshed-out ideas that they think are great. They say that in Hollywood everyone reads 1-2 scripts per night and 5-7 scripts per weekend. This (multiply by 365) comes out to 500-1,000 scripts per year. The best way for a first-timer to become successful is to read at least 50-100 scripts. But only read scripts of movies they’ve seen and loved. Thus, they are learning what an excellent script should look like. Now, they can go get one.

FM: Do filmmakers need a good dose of luck to succeed?

FM: Describe the sense of satisfaction you feel when an individual who took your course hits the cinematic big time

DS: Whenever I have a former student phone and notify me of the film that he has made that has either just won a film festival award or has procured an excellent distribution deal I always feel like the proud parent.

FM: Which films have influenced you?

DS: It is a combination of filmmakers’ films that have influenced me. Hitchcock (for suspense storytelling), Corman (for poster marketing expertise), Sayles (for common day drama) and Spielberg who combines Hitchcock, Corman and Sayles on a large-budget scale.

FM: Who are your most difficult/best students?

DS: I always love the seasoned pros who take my class and sit in the back row with their arms crossed and then on the second day they are sitting in the front row with their notebooks wide open ready to take another volume of realistic filmmaking notes.

FM: What future movies are you most looking forward to?

Next years Christmas Santa movies. They are my perennial favourites and they’re done every year. This year “Elf” and “Bad Santa” next year “Goofy Reindeer” and “Santa Gets Divorced”.