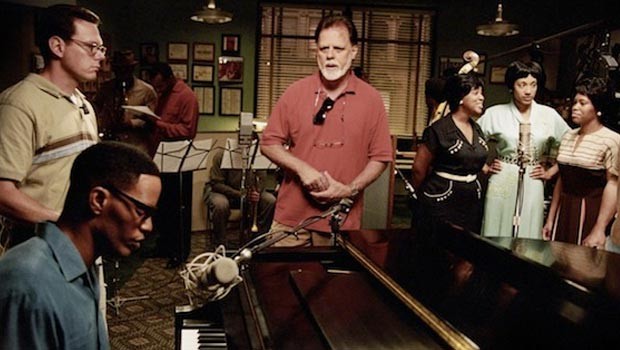 Did you hear the one about the Jew, the Arab and the African American?

There is much to enjoy in Taylor Hackford’s Ray, a biopic of the late, great Ray Charles. There’s an Oscar-worthy performance from rising star Jamie Foxx, who not only manages to resemble Charles to an uncanny extent, but also imbues his performance with a powerful emotional depth. Then there’s the foot-stomping musical numbers, which, thanks to Foxx’s ability to play piano, sound fantastic and display a level of realism not usually seen in cinematic musical numbers.

However, one of the most enjoyable elements of Ray is not to be found in a performance, or in the film’s direction or its script. Rather, it exists in the story of a relationship that the film explores; that between Ray Charles and his two producers at Atlantic Records, Jerry Wexler and Ahmet Ertegun.

The story begins in New York City in 1918 with the birth of Jerry Wexler, the first-born son of a Jewish family, whose father, a window washer, had emigrated from Poland. The story then jumps to Istanbul, Turkey on 31st July 1923 with the birth of Ahmet Ertegun, who came to the United States when his father Munir was appointed ambassador. And it continues in the Deep South segregated state of Georgia on September 23rd 1930, with the birth of Ray Charles Robinson, who was raised in considerable poverty by his young mother.

Ertegun grew up with a love of jazz and gospel music, and in 1947 was able to set up his own record company, Atlantic Records. Wexler also developed a love for such music as a child, a passion that was further developed when he studied in Kansas City, home of ‘swing’. In fact, whilst working as a reporter at music magazine Billboard, Wexler urged the replacement of the old phrase ‘race music’ and developed a new term himself: ‘rhythm and blues’.

In March 1948, one of the greatest proponents of rhythm and blues, who at the time was a blind 17-year-old, travelled from Florida on a Greyhound bus, to tour the Seattle circuit as a piano player and smooth voiced crooner. As Ray Charles toured, Wexler continued to write for Billboard and in the process met Ertegun. Tired of his job, Wexler was offered a position at Atlantic and in 1953 joined the label as a partner.

The lives of all three men finally intertwined in the early ‘50s when Charles signed with Atlantic after he was scouted by the two young, hot-shot producers. And it was at Atlantic that Ray began something considered highly controversial: mixing together Gospel music with the Blues to define a new form called ‘soul’. In 1956 Charles released the groundbreaking “I’ve Got a Woman”, followed by a string of smash hits, including “What’d I Say”, “Drown in My Own Tears” and “Hit the Road Jack”.

Although coming from very different backgrounds in terms of race, affluence and religion, Charles, Wexler and Ertegun would together change the face of American music. And if you are in any doubt about the importance of the time Charles spent at Atlantic, consider this: “I’ve Got a Woman” and “What’d I Say” are listed in the Rock and Roll Hall of Fame ‘500 Songs That Shaped Rock’, in the Rolling Stone 500 Greatest Songs of All Time and in the Grammy Hall of Fame.

So, not only is Ray is a great film to watch, but in these troubled times when it seems that people of different races, religions and creeds are becoming more alienated from each other than ever before, it is heart-warming to be reminded of an instance when three different people came together to produce something great. For Ray Charles, Jerry Wexler and Ahmet Ertegun helped to develop a completely new form of music, and together they tell the story of how a Jew, a Muslim and an African-American joined forces to leave an indelible mark on the modern cultural history of the Western world.