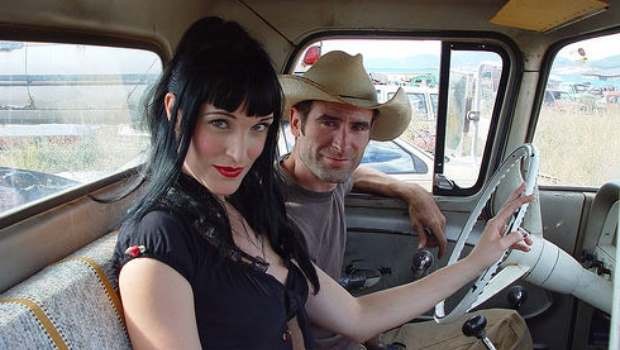 Diary of an Independent Movie

So how do you set about making your first film? For Veronica and Burke, it’s been an eventful labour of love. But their road movie Revolver has already scooped the Best Trailer No Movie prize at Los Angeles’ Golden Trailer Awards. In exclusive diary extracts by Veronica Varlow for Future Movies they reveal the process of taking their indie feature from dream to screen…

This is the story of our film, Revolver, told from the very beginning. Sometimes things happen because someone intended them to. Someone says I want to build a building here, or I want to start a restaurant, or I think I’ll write a book. But Revolver didn’t happen that way, it evolved on its own. It wasn’t a movie in the beginning, it wasn’t an idea for a screenplay, it wasn’t even a story. Revolver was just a little fantasy and desire … It has built tremendous momentum since then.

Revolver began in the early summer of 2001, as a daydream. I was dead broke and had just moved into one tiny room of a small apartment in the Lower East Side. My bedroom window looked out into the living room, and the living room had no windows at all. The whole place smelled of the cats that lived there and the Chinese restaurant downstairs. It was a pretty bleak situation.

The only good thing I could say about that time is that I had just met Burke. Burke is very important to Revolver, and not just because he is the co-writer and director. Before he came to play either of those roles, he was a character in the story itself.

Like any girl, I have a lot of dreams and hopes. I try to be a very positive person, but at the time, my dreams were full of escape. I wanted to get away from it all, my lousy apartment, my job, the city, all of it. And like any girl, not all of my dreams are as sweet and innocent as I let on. Truth be told, I’ve been dreaming of robbing banks for half my life.

So Revolver was born, out of longing for a road trip, an obsession with film noir style hold-ups, and a new relationship with a tall, dark, handsome man! Not a bad start.

Here is my first journal entry, the first time any of Revolver was put into words.

… Burke surprised me with a mix tape. I am listening to it with my eyes closed, again and again. All songs about the road … a soundtrack for a robbing spree if ever there was one. The cowboy and the showgirl, catch us if you can …

I blow wishes on him like my father used to wish on his poker cards. I see salvation. He’s the sweetest of amnesias. This boy devouring my soul with all the preciseness of the ultimate hustle. “Insidious”, he calls me. Designed to entrap. Attractive but harmful … seductive. What a beautiful word. What a vicious cycle he’s started. “Insidious”. And I, like any good poker player’s daughter, look out for the profit. And together we became …. The Cowboy and the Showgirl, two dying American breeds. America simply did not know what to do with us. It was only a matter of time.

His finger is on the trigger, aching for his touch, aching like she aches. Bullets in their chamber.

Another way to get under your skin. The rush of taking everything. You ask what I was wearing … well, Honey, I was dressed in your sin. We don’t have THE FINGERPRINTS to stay in this town.

That is where Revolver began, not even stories, just flashing images that made my spine tingle. The more I mused, and the more the longing built, the more elaborate the moments became.

This is the true story of the making of an independent film called Revolver.

Revolver is a love story, an adventure, and a road trip. Reeling from the darkness of New York’s un-marked nightclubs, Revolver takes the side roads. Along yesterday’s two lane highways, at 55 miles an hour, past rusted mile markers and peeling billboards, in a 62’ pick-up with bad tires, Revolver will take you back …

The Big Sky Drive-In has closed down, but if the gas holds out, you can still catch the last showing of old America.

The core story of Revolver started as an experiment, long before it was put down in screenplay form. An experiment we actually tried to see if it would work, an experiment banking on one very important thing. That at the heart of all of us … we are very desperate creatures.

I was once the first female projectionist at a revamped old silent movie house. While working there, what drew me in was not the simple plot devices and formulas, nor the old Hollywood glamour and elegance, it was the underlying emotional currents, seeped in danger and longing. It was what made me want to be Marlene Dietrich, Greta Garbo and Lauren Bacall as I mouthed along to their fiery dialogue. That danger and longing was the essence of our screenplay for me.

It was important to tap into the vein that all of us knew too well. So I asked, in today’s safe world of cubicles, e-mail, SUVs and prescription drugs, what is it that people really want?

And the answer is simple. To get away from it all.

So let’s escape, shall we?

Things we did know:

We wanted a car with not quite enough gas, the heroine to have a desperation which could never be cured, and a hero who had never done wrong. We wanted a story that stirred the two together, while knowing that like oil and water they can never mix. It’s the kind of story that the instant the protagonists’ eyes lock, something horrible happens in your stomach because you know it will all go dreadfully wrong. And you spend the rest of the movie grinding your jaw, and hoping against hope that they can be saved.

Things we needed to find out:

Was everyone as desperate as us?

It was after midnight at a party packed with people, when she sat down beside me, drink in hand. She was well put together, pretty and typical. She looked as if she was sitting there waiting for someone. She didn’t know it yet … but she was waiting for me.

She could have been any one of those very normal, average girls at a party. She was wearing a safe black dress, with her long hair pulled away from her face. Within the first five minutes of talking to her, I realized exactly who she was – the representative test subject of all American girls.

She was drunk and when I sat down next to her, she immediately grabbed one of my boots. Where did I get them, she wanted to know.

“Oh, so they’re not real leather,” she said.

“I’ll wear leather and fur and whatever. It’s fashion. It’s on the covers of Vogue. People have been doing it forever. And it looks damn good. Animal rights is so pointless. God put animals on this earth for us to use.”

“We are all animals,” I thought, and caught myself licking my lips (which happened one too many times that night).

“You wait tables?” Her mind was already wandering.

“No. I just wait. For him to come get me and take me away.” Her drunken eyes sobered up as she turned her entire attention to me. I’d hit on something. I could tell. So I moved on, the story of Revolver’s heroine in my mind. Tonight, I was Blue.

“What do you mean you wait for him to come take you away?”

“My whole life I felt like something was missing, you know?

“We’re going to Vegas. Just like that. And see, I know it’s going to happen. I just don’t know when. So I sleep with a suitcase under my bed and I wait for his beep. I’ve always wanted to just go out there … into the unknown and find it. Just somewhere away from here. Far away from the schedules, and the people I work with, and everybody’s expectations. Just me and him, somewhere I can do whatever I want to do.”

She was drunk enough that her hands started running up and down my arms as I talked, weaving their way through the conversation.

“And I dream of it, you know? I dream of the sound of the horn of his car. Sometimes I wake up thinking I’ve heard it, afraid I’m going to miss it and I run to the window to find nothing there. But it’s coming. Any day now. Any day is going to be my lucky day.”

… she was already packing her suitcase. Her fingers had stopped and were now wrapped around my wrist. As if I was in danger of slipping away from her.

“But, but, but … what about money? I mean, you’re going to leave just like that?”

I look over her shoulder at Burke, who has been listening the whole time. He shrugs, “Go ahead, tell her.”

The spell is broken for half a second as she realizes she’s surrounded. Me on one side, him on the other. But then I leaned in even closer and lowered my voice.

“Well here’s the thing … we’re going to hit convenience stores along the way.”

A jolt had gone through her. “Do you own a gun?”

She sighed all the air out of her body. She stared at the ceiling for some time before she leaned back into me.

“If someone was giving me trouble, I bet you’d protect me, wouldn’t you? Like a girl gang, huh? Me and you.”

“I’d protect you. Sure,” I said casually.

“So no one would ever hurt me, right?” She stared off for a minute and then looked back at me almost frantically, “Right?”

“No one would ever give you problems. I’d take care of them …”

She looked at me for a long while after that. “I believe you would.”

“Yeah, one day soon,” I said. “He’s gonna come and take me away from all this pain.”

“Let’s go,” Burke moved to get up. “Everyone’s heading to the car.”

“Take me with you!” She said, her hands not letting go of my wrists. “Let me get a pen and get your number.”

It was like the desperate seconds left of a dream as you’re being pulled back into reality.

And there was no pen for writing and remembering to be found.

She kissed my cheek with desperate quick kisses attempting to mark me with her lip prints as evidence that she existed.

That’s when I knew for sure, that I was not alone in my secret desperations and my lust for the road.

Check out Revolver, the official site at: www.revolverthemovie.com