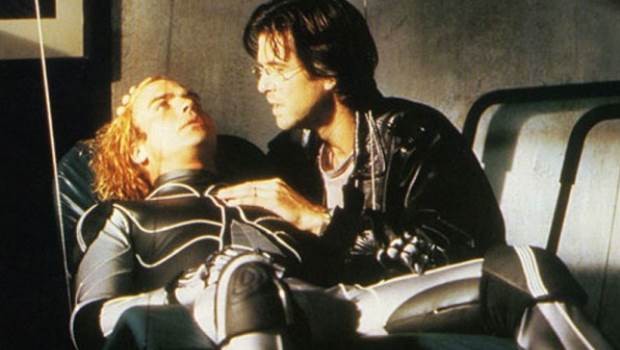 A freelance art director and production designer, Chris Farmer was born in Guildford, and lived for a time in London before relocating to the US in the mid 80s. There he got his break in commercials, before working as art director on the 1992 feature The Lawnmower Man. Farmer worked on commercials at Industrial Light & Magic, where he met producer Clint Goldman and director Steve ‘Spaz’ Williams, with whom he is reunited on the new Disney CG animated adventure The Wild.

You worked at ILM for a while, how important was that in the career that followed?

Chris Farmer: “I worked for about seven years at Industrial Light and Magic, and that’s where a lot of my visual effects work came into play. I had worked with Clint and Spaz there, and after I left I worked with them again making commercials at a company called Complete Pandemonium in San Francisco. We did a lot of visual effects work, mostly animated characters in commercials. We would design the characters, and The Wild came our way, I guess, because of a commercial campaign that we did for Blockbuster Video. We did this series of commercials with a guinea pig and a rabbit, and they were full 3D characters. It was very successful I believe, and that coupled with the background that Clint and Spaz had in visual effects and Spaz’s animation background, meant Disney came and recruited them for this film.”

The most striking thing about the look of The Wild is just how photo-realistic it is. Was that a very conscious decision on your parts?

Chris Farmer: “We wanted to give the film a different look from most other films that we’ve seen in the past. The characters Carl and Ray from the Blockbuster commercials were very photo-realistic, and we pushed for that look with our characters. We also gave them a few human touches in the eyes and we broke the jaw lines occasionally but not too often. We didn’t want it to become very CG like, we tried to stay away from any straight lines.”

And you avoided using too many humans in there too, didn’t you.

Chris Farmer: “We tried to stay away from them too, we wanted to make the story about the animals and not about the humans. Humans are secondary if they ever show up at all, they’re there to close doors occasionally, that’s about it. At the beginning we looked at various different artists’ work, different painters like Charles Sheeler and there’s a Californian painter Kenton Nelson, and they don’t paint any hard, straight lines, there’s nothing crisp about their paintings at all. They just have a nice soft focus, with soft edges to everything. We thought we would try and apply that, almost a like a photo with everything softened. I think that in the end result we managed to do that. Spaz is a big proponent of getting a nice soft focus background whenever he can.”

Did you ever consider mixing in some real live action backgrounds?

Chris Farmer: “It’s funny you should say that because we’ve had a few comments where people have asked if it was a live background or not at the start of the film. Everything is CG, at the beginning of the picture we tried to figure out if we could shoot backgrounds, if we could afford to, but in the end we went ahead and did it all CG. I think it would be interesting to see if we could slip something like that by though. When you get down to some of the city work, it looks like it has a lot of detail but there is an awful lot missing. We couldn’t possibly put everything in, we went for a broad stroke rebuilding of Times Square.”

Can you explain some more about the creation of the New York cityscape?

Chris Farmer: “Our Times Square layout issues were kind of interesting, because working in live action when you build sets you just build for the camera and you really try not to over build. When we ended up building Times Square when we were working in San Francisco we had it all laid out, the camera was looking one way and all the action was covered. When we moved out to Toronto for the second phase of production they decided that they’d like to put the camera in a different direction, and have the truck carrying the characters drive in various different locations. So we had to re-orient everything. Luckily we were doing it in a computer not on a soundstage.”

Your main characters are a lion, his cub, a koala bear, a snake, a squirrel and a giraffe – was it a major chore keeping their relative size consistent throughout the story?

Chris Farmer: “Definitely, and here and there they do change size a little bit. Not a huge amount though, but we definitely had some issues with camera, trying to fit them all in when you have the squirrel and the giraffe in the same shot. More often than not the snake rides on the giraffe’s back, because it would be impossible to get the snake around otherwise. Whenever the squirrel is in the shot with the giraffe the giraffe is always bending over. And there are some scenes where the koala gets bigger, though not too many.”

Chris Farmer: “It wasn’t a lot different really. In the pre-production phase in San Francisco the storyboards were being drawn, and as they came out we would sit down with the director and just discuss the sequence. Then we would rough it out in concept art, that matched the scenery that we needed, and then we would go and make a rough 3D model and from that 3D model we would draft some blueprints. We would send them to Toronto and they would start to build the sets. It was a very similar process, so when we handed in our blueprints, instead of handing them to a construction company we handed them to the production company. It was a very similar process as far as the design went.”

Did you take on any other extra duties on this film?

Chris Farmer: “I did go a little farther than my usual duties on any of the commercials or any of the other films I’ve worked on. We didn’t have a Director of Photography as such, we had a guy who was doing camera layout. So after doing camera layout we supplied colour scripts of the lighting designs for each scene, and then I was kind of overseeing the lighting department too. It was actually good in the end because we were able to set dress, put our trees in the jungle and get them in a decent fashion so that we could light them. It was a very consistent thing. For me it was a little bit more work, but very satisfying.”

You also become a location manager of sorts when it comes to entering the jungle, don’t you?

Chris Farmer: “Absolutely, what we tried to do was have a path of action, we’d follow the character through the jungle and place ideal trees here and there and just filled it in with foliage. But when we came to doing that stuff in Toronto we basically tossed out all our plans. We started off with a 3D groundplan, and then we had our characters mapped out, we had this top down view of what we would see and we would dress around them. It became a huge set dressing job really, and that was quite something,.”

Even though this is an animated world created entirely by you and your crew you’re still constrained by reality aren’t you?

Chris Farmer: “Definitely. We built everything as true as we could to the way it would be in real life. All our trees are real, and most of our buildings are real. We designed a zoo that was a little bit more fanciful in a way, with odd shaped buildings. A lot of them would probably never stand up in real life. We pushed it a little bit with something that was a little more modern and just had a little difference to it that set it apart from a regular zoo.”

Was DreamWorks’ animated film Madagascar ever a serious threat to The Wild?

Chris Farmer: “We knew about that film right at the beginning. We were greenlit either just a little bit before or a little bit after their movie was greenlit, and it was neck and neck at a certain point. And then we put the brakes on, we pushed it for a year and then decided to wait. In the short synopsis stage they are very similar, but when you see the two films you realise they are very different. This is a father-son tale, so you can draw the similarities from something like The Lion King too.”

Having worked for three years on something as intense and time consuming as this are you looking forward to getting back to a live action job?

Chris Farmer: “There’s something to be said for working on a project for six months or a year but I would say that I have good experiences from this film.”