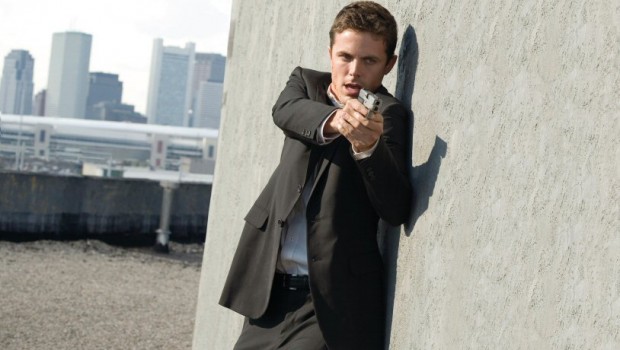 “I didn’t want it to feel like he could’ve gotten someone better,” Casey Affleck says simply, as he recalls pondering whether to take the lead in his brother Ben’s directorial debut, Gone Baby Gone. He adds: “He probably could’ve got someone better, and I think he tried!”

Affleck has lost his voice, leaving his tones even raspier than normal. He’s casually dressed in T-shirt, jeans and trainers, and frequently pauses long and hard to find the words he’s looking for, let alone the ability to say them in his current state. Still, at least he has a work to be proud of. He eventually agreed to play Patrick Kenzie, a Boston PI who, along with his girlfriend and PI partner Angie Gennaro (Michelle Monaghan), is hired by the family of abducted four year-old Amanda McCready, when the police investigation draws a blank. The pair find themselves up against corrupt cops, child abuse, surprising moral questions and the murky world of Boston’s criminal fraternity, as they delve deeper into the child’s disappearance.

Ben has surprised many critics by directing and co-writing an impressive adaptation of Dennis Lehane’s novel, although its British release was delayed six months as a gesture of sensitivity to the ongoing Madeleine McCann case. “There’s always similarities to something, and there’ll be a family out there that’s dealing with a tragedy like that the weekend this movie comes out,” Casey sighs, although he adds that he believes the UK release delay was the right thing to do: “If there’s the tiniest chance that it might interfere in any way with the real investigation, then there’s no question.”

When asked about how he thought his work relationship would be with his brother, Casey responds with characteristic nonchalance. “I wasn’t trying to ensure… I wasn’t anticipating… a very friendly relationship on-set. I mean, when you’re trying to make a movie together, and if you both care about it, then you’ve gotta be passionate – if you’re gonna disagree, then butt heads and work it out. Why I’m so comfortable about Ben is that I knew he and I could fight comfortably, you know? We could fight and say exactly what we want, which was great if for no other reason than we save time.” He pauses for a moment, before adding: “He was always very open to me doing things… I mean, sometimes he’d be frustrated because, um…” He smiles to himself, as though concerned he’s being too candid, before laughing: “Next question!”

Ben and co-screenwriter Aaron Stockard (a childhood friend of the Afflecks) took Kenzie’s age down from 40 to 30, both to accommodate Casey’s youthful appearance and to leave scope for a more dramatic character arc. “If you had a 40 year-old private investigator, he’s presumably been working for some time,” Casey explains: “He’s probably used his gun before, he’s probably seen a dead body before, he’s probably been exposed to a lot of the moral, grey areas of his job… Making him younger means that all these things are happening for the first time and so have more of an impact on him, along with decisions that are harder to wrestle with.”

The film has drawn praise for an unflinching study of the ‘real’ Boston, one of which the Afflecks have firsthand experience, although Casey is bemused by many critics who have reacted with shock at such an unsanitised dose of social reality. “I think, you know, the faces look real, and Ben seems to really love the city and wanted to photograph the people who live there and wanted to photograph the streets where we grew up, and I don’t think it’s that harsh; it seems pretty fair,” he shrugs, adding: “Every city has corrupt police officers and crack-heads, and children are abducted everywhere across the world, so I’m not sure I see what’s so awful about it.”

The film marks Casey’s graduation from a decade of supporting roles in some 20 films (some, he admits, “phenomenally awful”), to leading man, although he’s riding a wave of critical acclaim for his portrayal of the vilified killer Robert Ford in Andrew Dominik’s stunning western The Assassination of Jesse James by the Coward Robert Ford. “Well…” he begins. He pauses for several seconds before conceding: “I guess I’d be lying if I said it didn’t feel nice!”

The critical success is leading towards greater choice for the 33 year-old, although his apparent physical pigeonholing has been demoralising in the past: “Very often the character description, which is usually on the first page [of the script], is something like, you know… ‘Joe Smith, early 30s… Attractive, but not so you’d notice’!”

All that should be about to change for Affleck the younger.