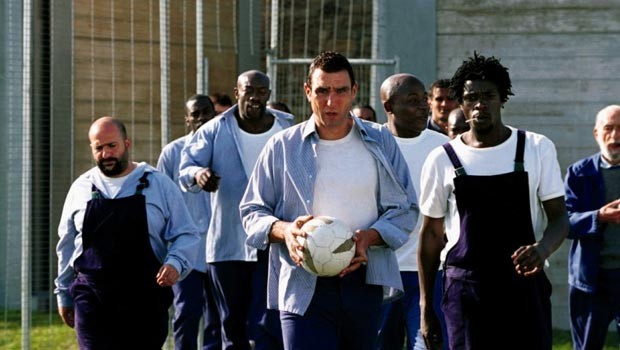 British and American Movies: The Pointlessness of Imitation

Increasingly in recent years British movies have tried to dump a watered down version of the standard Hollywood text/movie onto our cinema screens. This debased product cynically attempts to utilise the creative processes that inform the basic Hollywood template of filmmaking, that is stripped down “Meta – Narratives”, dealing with broad issues of love, death, violence, companionship etc etc… in the most banal and uninteresting ways.

Both stylistically and in terms of narrative, the British movie launched itself onto a downward spiral in the 1990’s that has continued to hurtle our film industry on a path towards mediocrity and obscurity in the 21st century.
Films such as “Shooting Fish”, “The 51st State” and the latest offering “Mean Machine” to name but a few have repackaged a small slice of Hollywood for the domestic audience. The most damning and lamentable part of the whole process is that Hollywood Money is often behind the entire sad affair, as the movie fat cats on the other side of the Atlantic displace the universality of Hollywood into a specifically British context.

To fully elucidate my points take as a case study the recent Vinnie Jones star vehicle “Mean Machine”, which I had the displeasure of seeing today. The concept is derived from a pretty average Burt Reynolds film from 1974 called “The Longest Yard” (aka “The Mean Machine” in the UK) but American Football is substituted for the association style that we know and love. The text instigates a run of the mill narrative about the loss of pride and honour and its subsequent retrieval, the machismo of sport and team spirit and the destruction of authority (and I am being very kind here) all hinged around the fallen hero figure of “Ex England Captain Danny Meehan” (Jones as log like as ever) and his efforts to reinstall a sense of worth in his fellow inmates.

This truly risible offering is juxtaposed with the fluff of a “typically British setting” of her majesty’s prison wherever, which provides a backdrop for Vinnie and his “Lock Stock” luvvie mates to act all “ard and cockney”, and to throw in some pretty unsatisfying footy scenes at the end.

So we are presented with what is an essentially Hollywood movie in style and substance, that parades as a “typically British Movie” (I ought to start copyrighting that phrase) through a veneer of British language and paraphernalia. The net result is a watered down version of a Hollywood film. This unfortunate trend in recent British filmmaking cannot stand up to Hollywood, neither technically or financially. Since the beginning of the 1980’s in particular Hollywood has streamlined its product to bang out films that are all things to all men, and we simply cannot compete.

Therefore what can we offer as an alternative? We need to nurture a cinema that is fiercely independent, esoteric yet not alienating. Assessable yet experimental and innovative that can appeal to a domestic market, that can make them think. We must stop patronising our audiences with this pap. We need to breed new talent whilst celebrating our most revered cinematic figures such as Peter Greenaway, Mike Leigh or Ken Loach (who receive widespread acclaim and more importantly financial backing on the continent, but are largely ignored domestically despite dealing with specifically British issues on the whole). In the past British cinema has strove to produce an alternative to Hollywood despite huge pressure, now we seem to be simply capitualting, what has happened to all the Derek Jarman’s, Michael Powell’s and Lindsay Anderson’s. It is not that I am anti Hollywood, and I don’t mean to sound so jingoistic (its not really about patriotism), it is just that Hollywood creates a certain type of film, in a very effective way, we cannot compete with this, so we should try to invent something new, a viable alternative, and align ourselves more closely with European modes of practice. This way a vibrant and interesting self sustaining British Film Industry can co-exist with the qualities that emerge from the monumental Hollywood production machine.