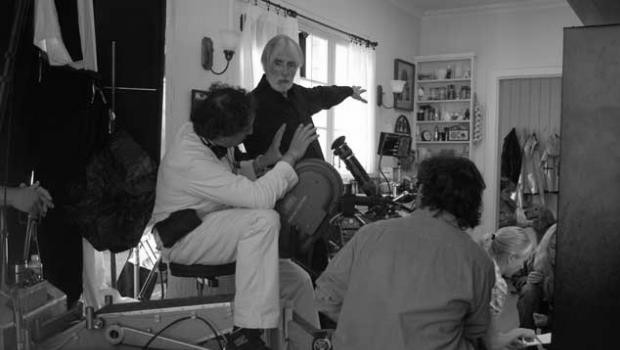 The scene takes place in an East Coast lake-house. Ann is an affluent middleclass mother, and right now she is fast approaching the limits of emotional endurance. Tormented, along with her husband and young son, by two well-spoken young sociopaths, Ann is battered, bruised and emotionally wrecked. “Why don’t you just kill us?” she asks one of her tormentors. “You shouldn’t forget the importance of entertainment,” comes the cruelly jovial response. Although potentially ripped from a tabloid headline, this single line of dialogue sums up the tone of Michael Haneke’s Funny Games U.S., a shot-for-shot English-language remake of his own 1997 Austrian domestic drama Funny Games. With moments of gut-wrenching horror mixed with spikes of jet-black humour, Haneke tells a sadistic tale that explores the media’s relationship with violence, and how that relationship impacts on viewers both young and old. For youths Paul and Peter (Michael Pitt and Brady Corbet, respectively), violence is a game without consequences, bouts of torture arranged between a bit of TV and a sandwich. When things don’t go their way, they literally ‘rewind’ the action and replay the scene with the necessary adjustments made; “Where’s the f*cking remote!” Paul cries as their victims briefly gain the upper hand. It’s a surreal moment, but nonetheless incisively taps into their states of mind.

Haneke counters the largely-unseen violence of Funny Games U.S. with dark humour, as though poking fun at the false reality of the films and television that have clearly inspired his two young sociopaths. Paul and Peter often raise a wry, if uncomfortable, smile when they discuss their motivation, gleefully plundering all the usual clichés (bullying, dismissive, divorced parents, um, incest…), while Paul’s occasional comments directly to the camera underscore the film’s voyeuristic elements (“You’re on their side, right?” he asks us). In contrast, events seen from the victims’ perspective are far more sobering, drawing attention to the emotional realities of personal crisis. Haneke lingers on Tim Roth’s George, nursing a painful injury while trying to dry a soaked mobile phone battery with a hair-dryer in order to contact the police; hardly thrilling stuff but painfully real. Swinging from the pathetic and helpless to the emotionally-crippling, Haneke also presents an audacious scene where he keeps the camera rolling for several minutes in the aftermath of a moment of particularly devastating violence in the couple’s living-room. Once again spared the act itself, the audience must drink in the consequences, as the surviving characters first orient themselves, and then react to the emotional impact. The result is heart-thumping, if utterly draining, cinema.

Whereas Haneke debates and criticizes the media’s relationship with violence, big-budget Hollywood seems to be responding to uncertain times by backtracking when it comes to violent content. Perhaps the highest profile example of the past year is Die Hard 4.0, aka Live Free or Die Hard, to use its self-conscious post-9/11 US title. The original Die Hard became one of the definitive action movie of the 1980s (and, arguably, beyond), presenting a bloody, violent and coarse thriller. It was targeted at a young adult audience in a market dominated by machismo and Schwarzenegger, in a wider Reaganite culture of Cold War militarization. In short, violence was cool. By the time the third sequel showed up last year, the franchise was targeted squarely at the teenage market. The hard-smoking, hard-talking John McClane neither smoked nor swore, and was even given a teenage sidekick in the form of TV-star Justin Long. The plot was also self-consciously teen-oriented, involving a disgruntled techie naughtily hacking into a US Government mainframe, and thus tacking a web-related ‘Point Zero’ onto the film’s European title.

As an action movie with plenty of explosions but little actual blood, Die Hard 4.0 demonstrates the reluctance of the studios to rely on the young-adult audiences that have proved so profitable in the past. This is perhaps why the relatively low-budget torture-porn horror of the past few years, such as the hugely profitable Saw franchise and Eli Roth’s Hostel films, have been rewarded with such enormous box-office. They provide the adult alternative to the increasingly sanitised content of contemporary big-budget thrillers, most of which are rated 12A in Britain as they target the teen market in a bid to increase their chances of taking back ever-ballooning production costs. As a result violent content is toned down, although the sanitised nature of some cinematic offerings is often controversial in a different way, as with Die Hard 4.0.

In sharp contrast to the modern cinematic trend, Rambo, the third sequel to the often under-rated 1982 thriller First Blood, clings to its 80s roots with considerable gusto, much to the consternation of many US critics. Sylvester Stallone co-writes, directs, stars and perhaps even made the tea on the project that attempts to revitalize the second iconic character of his career. He was clearly less interested in playing it safe in the current climate than he was in consolidating his mark on cinematic history with more of the same. He delivers a Burmese-set gore fest that has certainly succeeded in turning heads. Presenting the thinnest of plots involving western missionaries in need of rescue from the tyrannical Burmese military, the trim screenplay hinges upon staggeringly bloody action set-pieces, providing gleefully gruesome answers for anyone who wondered what effect a piece of heavy artillery will have on a human body at point-blank range. The resulting film was surely saved from a straight-to-DVD release only by industry goodwill for Stallone’s name and the franchise’s dubious genre pedigree. Nevertheless, it seems unlikely that Rambo represents a significant turning-point in the action genre, with the film seen more as a likely swansong to Stallone’s see-sawing career than any kind of industry barometer.

The thorny subject of movie violence can be detected lingering in the background of almost every headline-grabbing tragedy, from Jamie Bulger through to Columbine and, more recently, the tragedy at Virginia Tech. Combined with the post-9/11 cultural sensitivity, it’s perhaps unsurprising that the major studios are avoiding big-budget gore-fests. Still, with the next generation of video-games at times attracting even more attention than the latest installment of the Saw franchise, the question of how individuals respond to on-screen violence, and the reality of violent acts, looks to remain eternally relevant, even if sly explorations of the subject from the likes of Michael Haneke, seem few and far between.