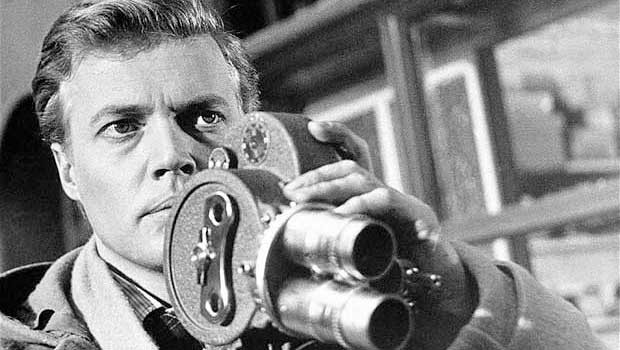 One of the truly great innovators of early British Cinema, Michael Powell was well ahead of his time in creating a body of work that displayed a true devotion to the cinematic arts; exuding vision, craft and expertise in handling the medium.

Unfortunately for Powell he worked many years before the “cult of the director” caught on. Today successful directors are superstars, able to make or break a movie as much as anyone performing in front of the camera. In Powell’s day directors were viewed as little more than technicians, competent bodies in charge of steering the ship in the direction of profit for the monolithic studio system (on either side of the Atlantic). As a result, recognition came late for Powell, he had already hung up his light meter when his reputation was reappraised in the 1970’s by the up and coming generation of filmmakers who had admired his work whilst growing up, at the fore of this group was Martin Scorsese, who befriended Powell in his final years.

Powell’s legacy is partially shared with Emeric Pressburger, his friend and partner, who produced whilst Powell directed many of their most lasting moments. Powell always stated that their relationship on set was something like a marriage, and they dubbed themselves “The Archers”. Like all great partnerships, their success was proliferated through their ability to compliment each other in the creative processes of filmmaking as opposed to how alike they were. Indeed they were vastly different characters, with varied backgrounds. Powell descended from a wealthy, land-owning family from the Medway region of England, “A Man of Kent” he always reported himself to be and that he remained until his death. Contrastingly, Pressburger was a Hungarian Jew who fled to London during World War Two who quickly garnered an insightful and analytical attitude towards his adopted country and its people. He always prided himself on his ability to understand the English “from the outside looking in”, and this emerges in the more satirical moments of their film output in films such as “The Life and Death of Colonel Blimp”.

Powell’s output (both with and without Pressburger) was constantly varied and challenging. Undaunted by tackling any subject matter or genre, Powell swiftly developed a personal style that was largely uncelebrated at the time. However over the years these images have not lost any of their charm and vigour and when viewed today appear vibrant and extremely ambitious. Powell was happy to tackle straight fantasy subjects (such as in “The Tales of Hoffman”) but also inject relatively mundane subject matter with “magical” elements. Films such as “The Red Shoes” and “Black Narcissus”, are permeated with an astounding arrangement of compositional elements that make the images burst through the screen. Lavish, super bright colour, well crafted sets and primitive special effects that hold up surprisingly well all combine to add a superior quality to almost every shot, that seems to reward all of the attention that is paid to the little details. Whilst being experimental with the medium, Powell’s films never became too sterile or over elaborate, they always maintained a respect for the basics of filmmaking and through this ongoing commitment and passion for cinema Powell aroused his greatest controversies and his most cutting edge achievement.

“Peeping Tom” ostensibly buried Powell’s then faltering film career. By the 1950’s the Powell/Pressburger partnership had come to an end, and Powell found it increasingly difficult to recapture a slice of the early success (films such as “The Battle of The River Plate” lacked much of the verve of some of the earlier films) yet with “Peeping Tom” in 1960 he produced one of the most raw and dark films of the decade. The film still embodies a cold and austere feel in the immediate period before the more light hearted films that came out of the middle and end of the decade. “Peeping Tom” is perhaps Powell’s most savage investigation of the medium, exploring the issues surrounding scopophilia, viewership and voyeurism through the central character of Mark (Karlheinz Bohm) and his twin obsessions of cinema and murder. Many of the scenes, without being in any way explicit, are brought terrifyingly close to the quick, as Mark uses the camera to simultaneously murder and film his victims. “Peeping Tom” is an awesome example of subverting many of the inherent pleasures of cinema and playing on the fears of the spectator, as the camera ensnares us into becoming accomplices with Mark. Critical reaction to the film at the time borders on the obscene, one particularly over dramatic example described the film as “A Snuff Movie”. As a result Powell found it very hard to work again, especially in the UK, until he was championed in the 70’s by the younger generation of American filmmakers who were inspired by his work. He subsequently acquired a teaching position at Dartmouth College, New Hampshire in the USA.

Sadly as is so often the case, Powell gained very little veneration in his own country, after his most successful period in the 1940’s. Even now his legacy is rarely celebrated, as it should be. Like so many other British filmmakers who achieved a modicum of success in a particular period, Powell found that circumstances changed around him and his ability to make meaningful cinema was constricted. Also in attempting to remain at the cutting edge of film production, and handling bold and explosive subject matter such as in “Peeping Tom” he essentially ex-communicated himself from the stuffy British filmmaking community of the time, and really never found his way back into the fold.

Yet his place as one of the great cinematic visionaries that this (or any country) has ever produced is assured, as anyone who has seen any of his films will testify. Films made with love, patience and flair stand the test of time as Powell’s outstanding artistic contribution to the cinema.