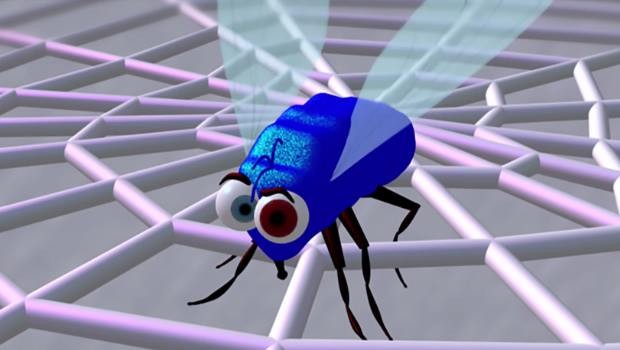 It Came Out Of The Drain is a short Animated Film that has been created by a two man team. The sound fx, stunning musical score, storyboards and animation are all the creation of Tris Prior and Rob Pace. Future Movies meets up with the hard working duo to ask them a few questions.

Future Movies: Who are your major animated influences on screen?
Tris Prior: Pixar are living legends!!. With a combination of visually stunning cg and outstanding storytelling it’s hard for these guys not to end up on top every time. Other inspiration has come from Looney tunes, sponge bob square pants for its unique humour and Nick Park’s Wallace and Gromit. Also I would say comics, although not animated they did inspire me at a young age… Garfield, Marvel, and the Beano.

Rob Pace: My biggest influence would have to be Pixar. I think they are fantastic storytellers and brilliant filmmakers, the best in the business. But I have also learnt a huge amount about the importance of timing and character animation from the likes of The Simpson’s, Futurama, Family Guy and Sponge bob Squarepants. At the moment, I am rediscovering the delights of Roger Rabbit, so advanced for its time. And I would also like to make a special mention to Jurassic Park, although not an animation as such, is the whole reason why I got into 3D in the first place.

Future Movies: What led you to create the two characters and their individual humour?
Tin Rats: The animation was one of the first things we ever did in 3d, so it was important for us to have a character that was easily modelled, easily controlled and moved in an environment that was easily managed. But it had to be fun for us to work on as well. A spider was the perfect solution and his hapless nature made him lovable yet humorous to the audience. The fly was created late into the project to replace a human element that just wasn’t working. This now gave us a much more manageable character and it became apparent that the idea of a cleverly cunning psycho fly was a hell of alot funnier.

Future Movies: A film score would usually be done by someone external, did either of you have a musical background and how was the music created?

Rob Pace: Yes. I learnt the piano for a couple of years but could never really perform to people and so it was easier for me to sit by myself and create my own music. It seems to come naturally to me to produce a tune and then go about layering it with instruments. But that was always free from the rules and constraints that I had to follow when doing the score for ‘Out The Drain’. I started working on it early in the project, producing little samples that would become the foundation to the whole piece. And then when we started to get final edits I would watch them over and over again and work out how the music would fit in and what instruments should be used. It was very important to us that the score would help the story along and set the mood, so it was written specifically around the action that was happening on screen.

Tris Prior: I can whistle!

Future Movies: How long did it take to complete the animation considering there were only of two of you?
Tin Rats: From start to finish it took us a year and a month although it was only part time and we did have a few weeks off here and there.

Future Movies: Did you encounter any technical difficulties whilst creating the film?
Tin Rats: Yep, Big time. We had some common problems of corrupted AVI’s and program crashes, and we also had some major ones. These were topped off by a hard drive crash which saw us lose 30% of our work and, whilst recording sounds, we constantly picked up a German radio station through the microphone that started broadcasting on at 4.30pm without fail. An unavoidable difficulty though was with some of our most complex frames taking up to 30 minutes each to render. This meant we had to leave the computer running through the night.

Future Movies: You’re both fresh out of education, what industries will you like to grab the attention of as your first clients and how will you go about doing this? Are you already getting interest?
Tin Rats: Although we’ve both now finished college there is still alot for us to learn, and by producing animations we are not just learning about 3d, but also about storytelling, cinematography, editing, sound, continuity, sound *haha*, directing and so on. We’d primarily like to grab the attention of companies that can see we have all these attributes and would like us to use them. But any interest from any company would be a bonus. Ever since putting the movie onto the web we’ve received great reviews, which has given us the confidence to enter it into festivals and put it forward to 3D world mag.

Future Movies: What will your next project be about and what will it aim to do?
Tin Rats: We are planning it at the moment but we are going to keep it under wraps for now. We want to make it technically better looking, but as with ‘Out The Drain’ the story will be all important. Hopefully humour levels will be raised and the characters will be equally, if not more lovable than the spider and the fly.

Free video: View It came from out the drain for free.