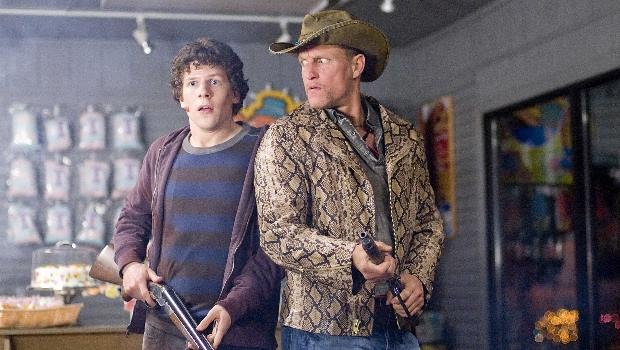 Summary: Judged purely on enjoyment from moment-to-moment, Zombieland is a must-see.

Arriving in cinemas this week with little fanfare and no guarantees of quality, Zombieland is a pleasant surprise indeed (that is, if your definition of pleasant allows room for multiple depictions of gruesomely splattered zombies. Mine does). Refreshingly brief at eighty minutes, perfectly cast and funnier than most of the comedies released this year, the only thing keeping Zombieland from classic status is its complete lack of a decent story. Thankfully it’s so consistently funny that it manages to hide its lack of narrative incredibly well.

Debuting director Ruben Fleischer’s first great choice is to begin the film right in the middle of the zombie apocalypse. No build-up, no need to explain how the world got in this state, just one throwaway line referring to a mutated form of mad cow disease. The point is, as far as this film is concerned, how we got here doesn’t matter; this is where we are, so let’s enjoy it. And from Zombieland’s super-slo-mo zombie carnage credits sequence onwards, enjoyment is what is on offer here.

Fleischer has clearly taken a leaf from Shaun of the Dead director Edgar Wright’s big book of filmmaking, as much of Zombieland’s humour comes from speedy cutting combined with an eye for mundane details amidst the horror; elements that Wright used to perfection in his breakthrough hit. Having said this, Zombieland is its own film, thanks to the very funny and inventive script by Rhett Reese and Paul Wernick. They may not be able to come up with more than two plot points between them, but they produce a load of great ideas within each scene.

For example, main character Columbus (Adventureland’s Jesse Eisenberg) tells us in voiceover that he has survived so far thanks to his strict adherence to a firm set of rules; these rules are then restated and adapted as the film progresses, and it’s a very effective and funny way to explore his character. The writers are also unafraid to let their characters take unexpected detours, allowing for a great sequence in which the four leads smash up an abandoned shop just because they can, and incorporating an extended cameo that is as hilarious as it is unpredictable.

Eisenberg is very good as the contented loner making the best of a bad situation, and he commendably holds his own opposite Woody Harrelson, on top form in his best role in years. His turn here as Tallahassee is essentially a dialled-down version of Natural Born Killers’ Mickey, but it’s undeniably what he does best and he is a joy to watch. On the girls’ side, Abigail Breslin plays convincingly against type as a no-nonsense teen, but it is Superbad’s Emma Stone who impresses most; she’s funny and sexy and she handles a gun with a confidence reminiscent of Linda Hamilton in Terminator 2. The movie world needs more action heroines – perhaps Stone could be a contender.

Towards the end, Zombieland’s weaknesses become more pronounced, and Fleischer’s inability to concoct a concluding set-piece worthy of what has come before is a little disappointing. Still, one of the key lines in the film exhorts us to “enjoy the little things”, and judged purely on enjoyment from moment-to-moment, Zombieland is a must-see.