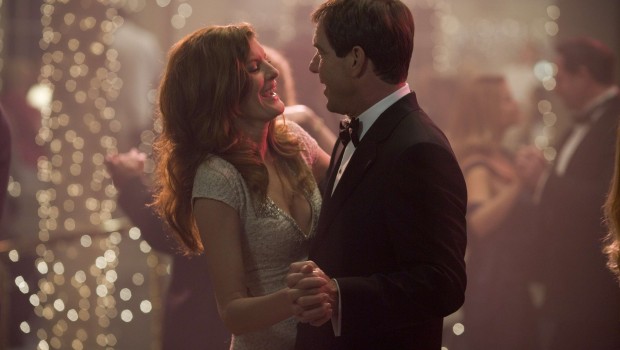 Yours, Mine & Ours Review

Your enjoyment of this treacle-soaked family comedy will probably entirely rest on whether or not you found Cheaper by the Dozen one of the biggest laugh-ins ever made. And if you did lap up Cheaper by the Dozen (not to mention its woeful sequel) then you’re probably a very bad person indeed.

Dennis Quaid is Admiral Frank Beardsley, a fussy widower who drags his eight “charming” brats from one town to another as he travels with his job in the Coastguard. Their latest move takes the Beardsleys to Frank’s hometown, where the Admiral is surprised to run into old high-school flame Helen North (Russo), now a liberal-minded artist with ten “charming” brats of her own. The pair swiftly fall in love again, get hitched and move into one massive house together. The fussy brats and the liberal-minded brats begin to detest each other. Chaos ensures. Oh, and there’s a pig in there somewhere too.

Well, the good news is that Your, Mine & Ours isn’t as monstrous as the Cheaper by the Dozen movies. And the bad news is, well, it comes pretty close. The plot is kept afloat by a succession of unfunny pratfalls set to a migraine-inducing level of noise. Worse though is the sentimentality – group hugs, ‘talking sticks’, some snivelling, the inevitable moral in the tale…All too often this is Hollywood soppiness at its worst.

To be fair Russo and Quaid both put in admirable efforts (the latter managing to retain a strange dignity even as he stomps into paint pots or crashes into waiters), and most of the child actors come across as vaguely personable rather than obnoxious – miraculous considering just how annoying their characters are. There’s also support from seasoned veterans Rip Torn and Linda Hunt, who at least appear to be having a good time in their advancing years.

Yours, Mine & Ours (a remake of the 1968 movie of the same name) is a harmless, old-fashioned tale that may hold some appeal to kids who aren’t too fussed about childhood wizards or the drunken exploits of Lindsay Lohan. Otherwise viewers could be in for a reasonably painful experience.

Not a bad selection of extras actually. Ten featurettes cover topics like the casting process and advice for child actors, while the Behind the Scenes feature is filmed by the kids themselves. There’s also a couple of deleted scenes that help fill in a rather disjointed early section of the movie.