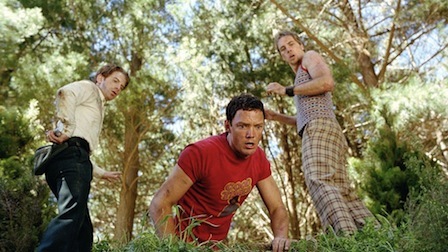 Without a Paddle Review

“It’s Deliverance meets Road Trip!” You can almost see the pasty-faced movie execs chortling to themselves about the endless comic possibilities. Crazy rednecks! Bear attacks! Women who don’t shave their legs! Surely even the most humourless sap couldn’t refuse such comic gold?

Well, you’ve probably already made up your mind whether you’re going to find Without a Paddle comic gold or not. For better or worse, it’s exactly the film that you know it’s going to be. Following the death of one of their childhood friends, three pals from Philadelphia (Green, Lillard, Shepard) stumble across an old map that apparently pinpoints the whereabouts of loot hidden by infamous robber DB Cooper. As a “mark of respect” to their dearly departed friend, the trio embark on a camping trip to the scenic backwaters of Oregon in the hope of hunting down the fabled treasure. Low and behold it’s not long before they’re knee-deep in – you’ve guessed it – crazy rednecks, bear attacks and women who don’t shave their legs.

There aren’t many standout hilarious scenes in Without a Paddle (alright, there aren’t any), but the film remains reasonably amiable and occasionally amusing. That’s no substitute for a decent, well-written script of course, but you don’t expect miracles here. The three leads are all engaging enough and make for convincing lifelong buddies, while the last third of the movie throws in a bizarre but welcome appearance from an almost-unrecognisable Burt Reynolds as an oddball hermit. It’s also snappily edited and stuffed with picture-esque woodland scenery (with New Zealand standing in for Oregon naturally) and a fast succession of efficient chases and stunts. In fact, with Liar Liar director Steve Brill at the helm (or should that be at the paddle? Ho ho) Without a Paddle does suffer a little for being too slick for its own good. These kind of noisy, moronic comedies always seem better suited to the anarchic, rough-around-the-edges feel that made so many 80s comedies much more endearing, leaving Without A Paddle a little lacking in genuine fun or energy.

Even though it ends in trite declarations of growing up and facing responsibilities, it’s probable that the Without A Paddle’s biggest fans will be those both firmly under 15 and weaned on a pure diet of fizzy pop and hotdogs. In terms of comparison it isn’t as good as, say, Road Trip (itself hardly the greatest movie in the world), but it remains just about passable viewing to while away a brain-free Saturday afternoon.

Without a Paddle-aholics (should there be such a thing) couldn’t really ask for more than this. Two commentaries are on offer – one by director Steve Brill who spins a few on-set anecdotes and shockingly admits to never having seen the Lord of The Rings films, and a better one with Brill joined by the cast. The latter incorporates that neat little commentary trick that The Goonies used to good effect of having the cast pop up in a box on screen, and they make for entertaining company as they proceed to happily talk over each other with amusing tales and gentle mocking. You also get a host of okay deleted or extended scenes, a perfunctory making-off (it seems unlikely that Without a Paddle will go down with Apocalypse Now as one of the great behind-the-shoot stories) and a host of special host promo ads (dubbed “Interstitials” in the menu), some of which are funnier than anything in the film itself.