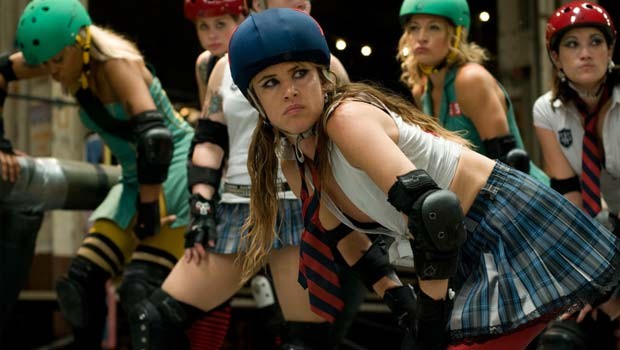 Summary: A deft balance of sincerity, hope and silliness.

From infant star to wild-child persona to cutesy rom-com stalwart backed by a shrewd business sensibility, Drew Barrymore has continually found new ways to win audiences’ affections. And with her first film as director she maintains that track record, gathering a fantastic cast and making an unashamedly fun and feelgood movie, and putting something clearly close to her heart onscreen in the process. She places a niche women’s sport – Roller Derby – front and centre, but Whip It is no chick-flick on wheels; its mix of sporting action, silly humour and memorable characters will appeal to anyone who loves a good time at the cinema. The former Charlie’s Angel also scores a bullseye with the casting of leading lady Ellen Page, an actress who has such a likeable onscreen presence that no audience could help but cheer her on.

Page plays Bliss Cavendar, an average 17-year old from smalltown Texas who discovers the punk-infused appeal of Roller Derby and, despite the expectations of her beauty pageant-obsessed mother, secretly starts taking part. While the role isn’t as unique or challenging as those that she so brilliantly performed in Juno and Hard Candy, Page makes Bliss completely her own, and effortlessly draws the audience in, even in the context of this rather formulaic story. Her achievement is no small one considering that she’s surrounded by a wealth of endlessly watchable actresses, including Juliette Lewis, hugely entertaining as jokey nemesis Iron Maven, and ace comedienne Kristen Wiig, who gets a rare chance to play a slightly more serious role, and proves herself well able. Barrymore keeps the most broadly comic part for herself, and has a great time crashing into things and punching people as the short-fused, accident-prone, wonderfully-named Smashley Simpson.

Working from a script by Shauna Cross, who also wrote the source novel, Barrymore lets some of the domestic scenes hang around for too long, but directs with energy and confidence on the track. Getting her camera right in amongst the fishnets and mini-skirts, she gets a great balance of intensity and fun, and successfully builds to a final event that feels properly exciting. Jimmy Fallon, a former Barrymore co-star and a fine comedian, adds more laughs into the mix as trackside commentator Johnny Rocket, and aptly sums up the film’s easygoing approach to explaining Roller Derby’s rules: “we’ll keep track of the score, you keep track of the fishnets”.

While Whip It’s plot is aptly summed up in the title of Radiohead’s No Surprises – one of the many great choices on the film’s excellent soundtrack – it doesn’t really matter; the real enjoyment is in seeing this great cast on supremely entertaining form. With Page easily handling what little dramatic weight there is, the support players are free to focus on being funny, and they give it their all. Deserving particularly special mention is Andrew Wilson, who plays Razor, the girls’ coach. He very accurately sets the tone of the film in his performance, a deft balance of sincerity, hope and silliness. And that’s not a bad summary of what Drew Barrymore has served up with Whip It.